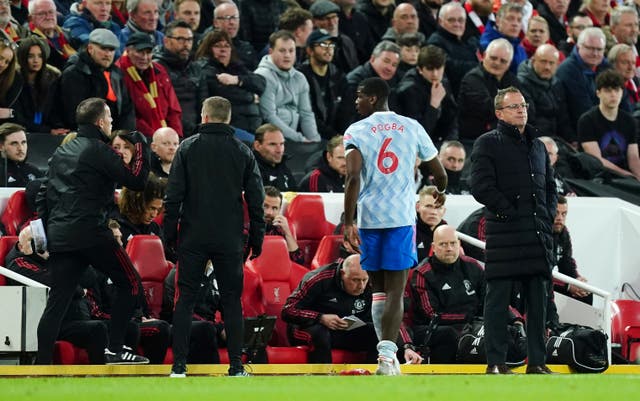 The 29-year-old came through the Old Trafford youth set-up and rejoined the club in 2016 following a successful stint at Juventus for a then world-record fee.

But Pogba’s return has not worked out how either party would want and the World Cup winner looks set to leave United this summer when his contract expires.

There is little sign of him agreeing a new deal, meaning the 10 minutes he managed before limping off with a calf injury in Tuesday’s 4-0 meek loss at Liverpool are likely to be his last for the club.

Rangnick says Pogba is facing a minimum of four weeks on the sidelines, which would bring an underwhelming period to a fitting conclusion.

“It doesn’t make sense right now (to talk about his characterisation as a player),” the interim boss said when asked if the midfielder was an enigma.

“He’s injured. He’s a player who won the World Cup with France. He’s such a good player that he was a regular starter for a team like France.

“But he was, quite like a few other players, just struggling to get his best performance sustainably on the pitch for a team like Manchester United.

“This was not only the case this season or in the last couple of weeks, as far as I remember this was also the case in earlier years.”

Asked why that was the case, Rangnick said: “Well, that’s difficult to say. If myself or other coaches knew that it would probably have been easier to change that.

“I don’t know but right now it doesn’t make sense to think about that because he won’t be available for the game tomorrow and most likely not for the other four upcoming games.

“As it seems right now, he will not renew his contract and, I don’t know, maybe the club or (incoming boss) Erik (Ten Hag) will also not want to renew the contract. I don’t know.

“But it’s most likely that he won’t be here anymore next season.”

Pogba is one of a number of players that are set to leave during a summer of change that will be overseen by newly-appointed manager Ten Hag.

Edinson Cavani, Jesse Lingard and Juan Mata are others that are out of contract, while Nemanja Matic has already confirmed he is leaving.

There are also a number of frustrated peripheral figures at the club, including Eric Bailly.

The defender appears to be United’s fifth-choice centre-back and seemingly suggested on Instagram that he should play alongside Raphael Varane instead of Harry Maguire in Saturday’s Premier League match at Arsenal.

“Listen, I’m not talking about my players now in the press conference not knowing what has happened. This doesn’t make sense.

“But I can only tell you, never in my life and I will not be part of Instagram, Facebook or whatever.

“If this is really true what you just told me, then I think it’s not the right sign. This should not happen in a football team, no matter in which league.”

Ten Hag has his work cut out in the summer but United’s short-term focus is on trying to keep their Champions League hopes alive.

Rangnick’s side desperately need a win at top-four rivals Arsenal and the interim boss says making amends for Tuesday’s 4-0 humbling at Liverpool is as important as impressing the new manager.

“That should be the case but coming back to tomorrow’s game, we also owe that to our supporters,” he said.

“We owe it to the couple of thousand supporters travelling to London tomorrow and the millions of Manchester United fans all over the world.

“And it’s also a question of pride and honour towards themselves.

“We cannot play the way we played at Liverpool. This is just impossible.

“We showed in the last couple of weeks and months that we’re capable of playing in a different way.

“Tomorrow it’s about just showing the basics, being compact, coming behind the ball, being able to attack, to sprint in the right moment, not as we did when we conceded the first goal.

“It was never part of the game plan to stand at the halfway line, even more so since Paul Pogba was already hobbling across the pitch.

“He should have laid down or sat down on the ground in that moment – I was watching that goal we conceded, obviously quite a few times – but he was trying to hobble behind the referee and telling him that he’s injured.

“We were effectively one player down but still attacking high up and against a team like Liverpool, who is probably one of the best in the world in those transitional moments, that wasn’t particularly smart from our side.

“Again, for tomorrow we just need to be – and we have shown that in quite a few away games – compact, close together, we need to be on the front foot whenever it is possible to put them under pressure and then create our own transitional moments. This is the basics of the game.”