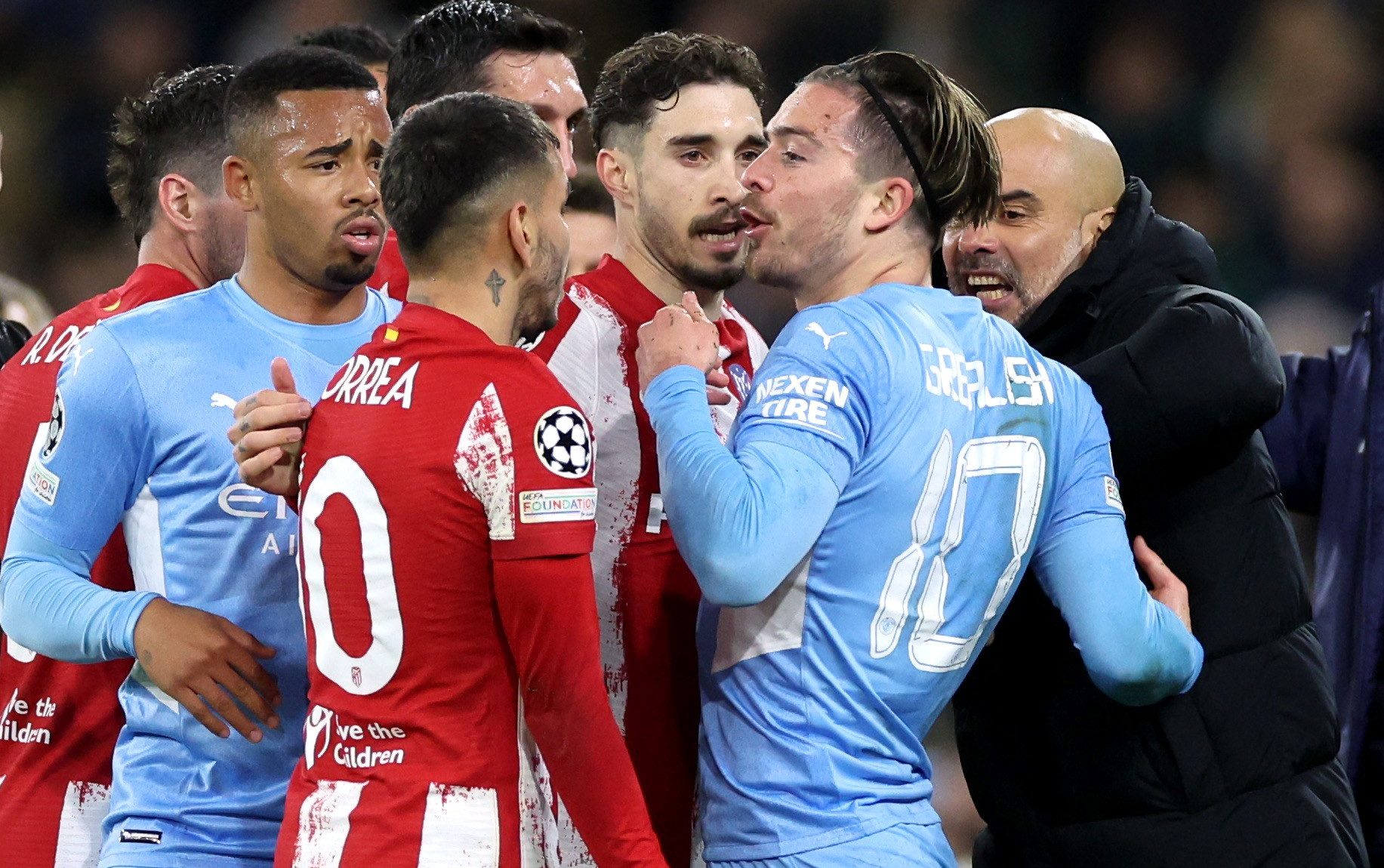 Pep Guardiola has warned his Manchester City stars not to lose their heads in Spain next week after the manager was forced to drag Jack Grealish away from a clash with Atletico Madrid’s players on Tuesday night.

Grealish became embroiled in an angry spat on the touchline after Atletico’s Angel Correa booted a ball at the City midfielder towards the end of the Premier League champions’ 1-0 win.

The ball bounced off Grealish’s knee before hitting him in the face and led to the England international – a second-half substitute – confronting Correa and clashing with other Atletico players, including Sime Vrsaljko and Stefan Savic.

Guardiola – who reportedly told Correa “you are mad” as tempers threatened to flare – reacted by shoving Grealish out of the way and ordering him to cool down.

The City manager also sought to shepherd Grealish away at the final whistle before Fernandinho took on the responsibility of keeping his team-mate out of trouble.

Grealish was fouled five times in the 22 minutes he was on the pitch, more than any other player, as Atletico sought to rile the 26 year-old with their familiar brand of gamesmanship.

Guardiola refused to be drawn on whether he felt Correa should have been sent off for the incident but left his players under no illusions that they need to keep their composure in the second leg of their quarter-final at the Wanda Metropolitano next Wednesday.

“We have to control our emotions and do what we have to do [in Madrid],” he said. “There are things we are not good at. There will be a referee there in an incredible stadium, a good environment.

“Atletico face these kind of knockout stage games many times – more than us – and it will be a good test for our maturity.”

Asked if referee Istvan Kovacs should have dismissed Correa for kicking the ball at Grealish, the City manager added: “The referee is there. It is not my job. Jack reacted really well and focused on what we had to do.”

Diego Simeone, the Atletico coach, said he would use all the tools at his disposal to try to overcome City in the second leg.

“We play with that feeling of just wanting to go through using the tools we have against a team with the weapons they have,” said Simeone, who was losing his voice after shouting so much throughout the game.

“We know they’ll play in the same way and we’ll use the tools we have at our disposal to go through. I’ve been shown how to compete until the end in any way you can.”

Guardiola described Atletico as “masters of defending all together” and said it felt like City were playing against a side playing in a “5-5-0” formation at times.

But he praised his side’s patience and the impact of Phil Foden, who came off the bench to set up Kevin De Bruyne to score.

“Yeah, he [Foden] has a special quality,” Guardiola said. “His reception is always forward, his space in the first step is massive, he has the composure to make an assist for Kevin. Jack for the control of the game to give continuity. They did it and they were brilliant. We spoke many times this competition is not just 11 players.

“He [De Bruyne] is in the best moment of the season right now – he is sharp, quick and positive. His influence in our game is massive. He made an exceptional goal with the combination with Phil.”

De Bruyne said: “I made the run and Phil found me perfectly, I needed to stay composed and luckily I did. It’s very hard. They played with almost five at the back and with five in midfield. I recommend anyone that says anything [about us], that they try playing against that on the training ground.

“We have to stay composed and don’t try to get into their action. It is the way they play. One nil is one nil. I expect similar over there. If the game is tight they will have to attack a little bit more.”