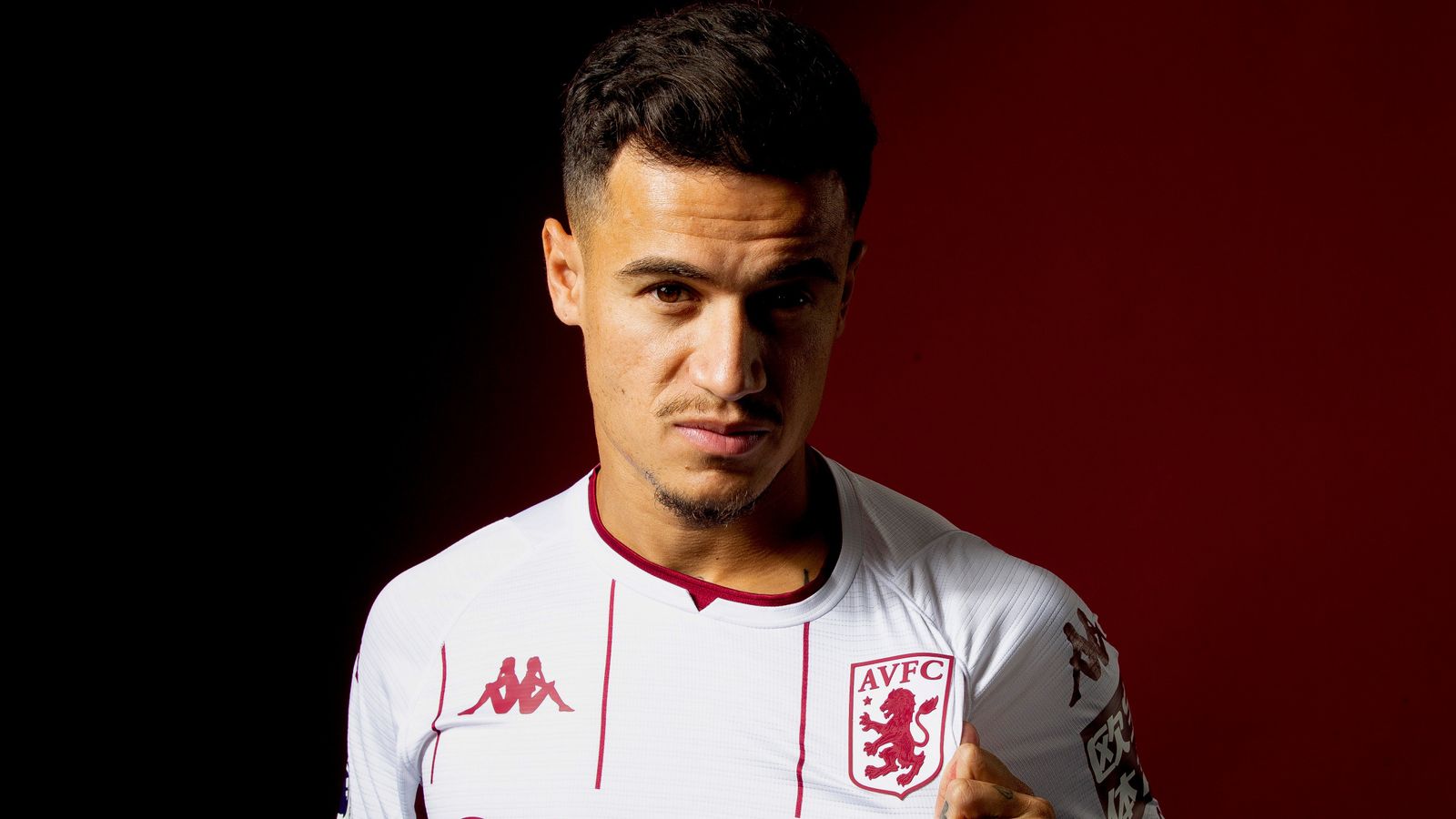 Philippe Coutinho is available for Aston Villa to play Manchester United on Saturday Night Football, but Steven Gerrard won’t rush his new signing, admitting he is not match fit.

Barcelona loanee Coutinho has initially moved to Villa Park until the end of the season and is likely to be on the bench for Saturday’s visit of Manchester United.

Gerrard also says Lucas Digne is available for the clash, live on Sky Sports, after he became Villa’s second signing of the window in a £25m move from Everton.

“They’re available. Philippe’s trained for three days now with no issues. We obviously have to build his match sharpness and match fitness up.

“Lucas is slightly different. He’s been involved in group training for quite some time and he’s been available for Everton before he arrived.

“They’re both available for selection with the group and they’re both in a good place but, obviously, decisions will come off the back of information we’ve had of both players over the last couple of days.”

Gerrard, who played with Coutinho at Liverpool, said Villa are lucky to have the 29-year-old and doesn’t buy into the idea that he is arriving from a difficult time at Barcelona.

“He is a fantastic talent, we are lucky to have him and at the right time he will be unleashed,” said Gerrard. “His name alone inspires people, what he has done in the game inspires people. I have no doubt at all we will see the real Philippe Coutinho in time.

“I don’t buy into this ‘he never had the best time at Barcelona’. This is a kid who has won leagues at Barcelona and won the Champions League at Bayern.

“He is hungry to play. If we can get him feeling good and the confidence back, Phil Coutinho is still inside Phil Coutinho.”

Meanwhile, the club have opened talks with defender Kortney Hause over a new deal, with Gerrard also planning discussions with Ashley Young.

Both are out of contract in the summer, with Villa holding an option on Hause, and Gerrard is eager to keep both.

“Kortney is different to Ashley, there’s an option situation in place, and we have already started speaking to Kortney,” he said. “We have told him how important he is to us and we would like to keep him about. He wants to play more, which we respect, but talks are ongoing in the background.

“Ashley has been fantastic, he broke his toe recently but he has been a leader and standard-setter in the group. We will continue to talk to Ash as well but we haven’t got the ball rolling yet.

“He is happy and we’re happy with him. I’m sure it won’t be long until we have a discussion along those lines.”

Buendia: Coutinho and I can play together

In an exclusive interview with Sky Sports, the Argentine discusses how the pair could play together, life under Steven Gerrard, his current form and his dream of playing alongside Lionel Messi at the World Cup.

Jack Grealish once commented Philippe Coutinho was one of his favourite players to watch on YouTube. “He always has that one, you know, where he goes left and drops like a little shimmy, which is what I like doing myself.” Now the journey has come full circle.

While Grealish perfected his art enough to earn a £100m move to Manchester City, Coutinho returns to the Premier League to replace him at Aston Villa. If the Brazilian can repeat the form that took him from Liverpool to Barcelona it will be an ideal signing.

There are similarities between the two players. Grealish praised Coutinho’s ability to “go past players like they aren’t there” and that is what Villa so loved about their former captain. They have missed having that player who can make things happen this season.

Is the Coutinho idolised by Grealish still there? At 29, there is time to recapture his best form under old team-mate Steven Gerrard, but his career has drifted at Barcelona. If, like Grealish, Coutinho is inspired by being the main man at Villa Park, there is fun to be had.

In the latest Essential Football Podcast, host Alice Piper is joined by Nick Wright, Charlotte Marsh, and Peter Smith to preview this weekend’s Premier League action. Plus we hear from Sky Sports pundit Alan Smith ahead of the north London derby.

PART ONE | Alan Smith delivers his north London derby verdict ahead of Arsenal’s trip to Tottenham and explains why the midfield battle will be key after the Gunners’ tiring battle with 10 men at Liverpool on Thursday.

PART TWO | It’s first vs second in the Premier League on Saturday when Manchester City host Chelsea. Is this the London club’s last chance to stay in touch with leaders City? And could a win for Thomas Tuchel’s side open the door for Liverpool, too? Plus we look ahead to Philippe Coutinho’s Aston Villa debut, with Steven Gerrard’s men facing an out-of-sorts Man Utd for the second time in a week.

PART THREE | Jarrod Bowen is in fine form and we take a look at the numbers behind his recent purple patch and discuss how it is driving West Ham back into the top-four race after their dip in December. Ahead of their match with Leeds we also examine how injuries have made life tough for Marcelo Bielsa this season. And finally, will Brighton or Crystal Palace come out on top in their rivalry showdown on Friday night?

Follow the January transfer window with Sky Sports
Who will be on the move in January?

Follow Aston Villa with Sky Sports
Follow every Aston Villa game in the Premier League this season with our live blogs on the Sky Sports website and app, and watch match highlights for free shortly after full-time.