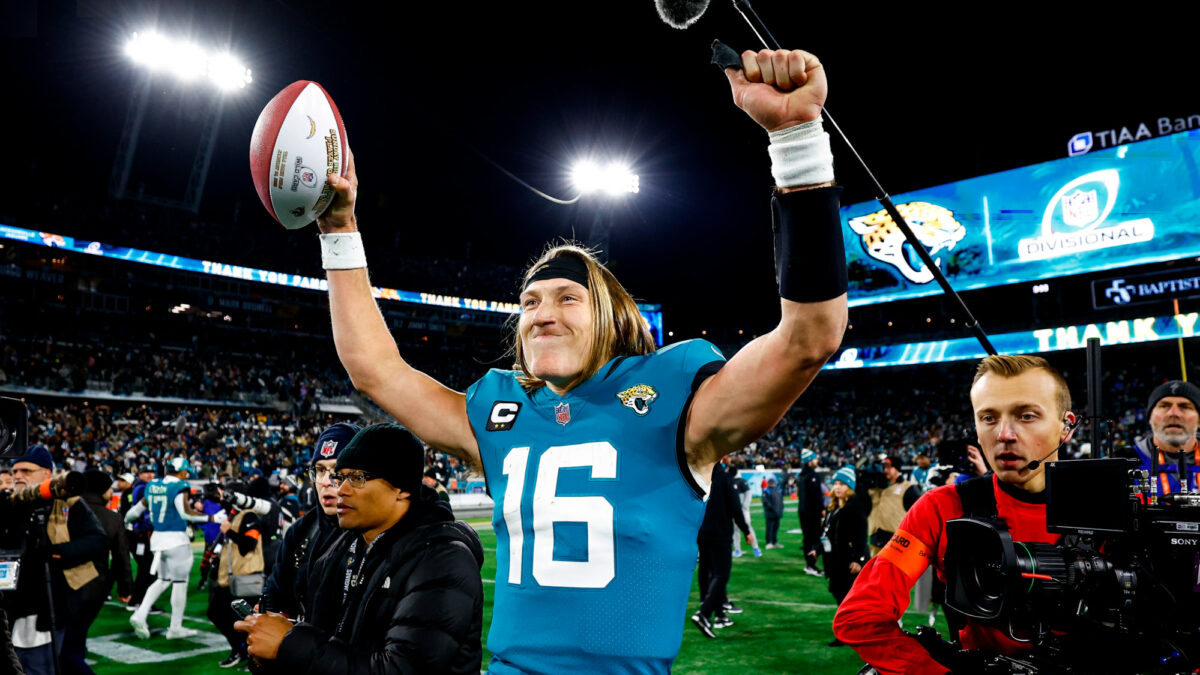 Riley Patterson kicked a 36-yard field goal as time expired and the Jacksonville Jaguars recovered from a 27-point deficit to post a dramatic 31-30 victory over the visiting Los Angeles Chargers in an NFL wildcard contest.

Jacksonville’s Trevor Lawrence overcame four first-half interceptions to throw for 288 yards and four touchdowns to lead his team to the third-largest comeback victory in postseason history.

The Buffalo Bills famously rallied from 32 down to beat the Houston Oilers in a 1992 wildcard game and the Indianapolis Colts came back from a 28-point hole to beat the Kansas City Chiefs in a 2013 wildcard clash.

“We said in the locker room that’s kind of how our season’s going. We’re never out of the fight.

“I’m kind of speechless, honestly, just to see what belief can do and to see when a team believes in each other what you can accomplish.”

Travis Etienne rushed for 109 yards for the fourth-seeded Jaguars.

He set up Patterson’s winning kick by breaking loose for a 25-yard gain on fourth-and-1 to the Los Angeles 16-yard line.

Jacksonville trailed 27-7 at halftime but moved closer when Lawrence threw a 6-yard touchdown pass to Marvin Jones with 5:11 left in the third quarter.

Rookie quarterback Brock Purdy has thrown three touchdown passes and ran for a fourth score in his NFL playoff debut, leading the San Francisco 49ers to a 41-23 home victory over the Seattle Seahawks.

Purdy picked up where he left off in the regular season for the 49ers (14-4) and showed few signs of playoff jitters by winning his sixth straight start since replacing an injured Jimmy Garoppolo early in a Week 13 win over Miami.

The Niners, the  NFC’s No.2 seed, won their 11th consecutive game and advanced to the divisional round where they will host either Minnesota, Tampa Bay or Dallas next weekend.

“We’ve got a goal of winning the whole thing,” Purdy said. “We’re in a tournament, so anything can happen. I’ve got such a great team, O-line, receivers, defense, across the whole board, man. It’s not a one-man show. I’m very blessed. Thankful to be here.”

Purdy, who was the last overall pick in this year’s NFL draft, connected on a 3-yard pass to Christian McCaffrey in the first quarter, converted a 1-yard sneak in the third quarter and a 7-yard TD pass to Elijah Mitchell early in the fourth to make it 31-17.

The Niners broke it open when Deebo Samuel took a short pass from Purdy and raced in for a 74-yard score.

Purdy threw for 332 yards – the second most ever for a rookie in the playoffs to Russell Wilson’s 385 in a loss to Atlanta 10 years ago – and he became the first rookie quarterback to account for four TDs in a playoff game.