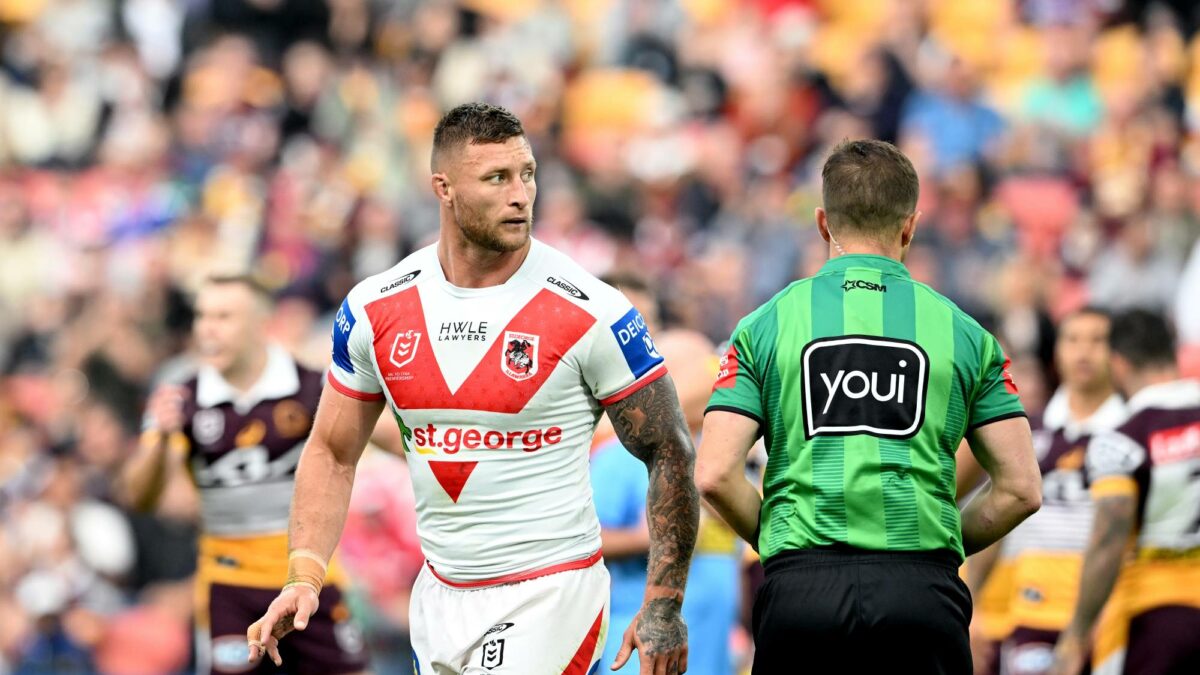 Dragons coach Anthony Griffin denied his team was out to push the envelope with their tactics after forward Tariq Sims spent a costly 20 minutes in the sin bin as a new-age Baby Broncos line-up took full advantage of his ill discipline to record a resounding 32-18 victory at Suncorp Stadium.

Sims has escaped a long suspension but can accept a one-game ban for his shot on Brisbane’s Rhys Kennedy.

Sims was was unlucky to be marched the first time around but in the second incident he could have been sent off for forceful contact to the head of an opponent but referee Grant Atkins opted to give him another 10 to cool his heels.

“I can’t change it now,” Sims told Channel 9 in a sideline interview straight after the game. “I’m just disappointed I put my teammates under pressure. It’s pretty embarrassing.”

Sims received two charges for the separate incidents but will only need to pay a fine for his hit on Adam Reynolds.

Sims tackled the Brisbane half fractionally after he passed out wide and Atkins put the Dragons veteran in the sin bin in what was a harsh call.

“Are you serious? That will do me. That is just disgusting. Honestly, that’s a millisecond,” former international Paul Vautin fumed on Nine commentary. “If Sims comes and doesn’t make that tackle and Reynolds goes through the hole, then he’s in trouble from the coach.”

Brisbane were wearing their retro uniform honouring the 30th anniversary of the 1992 premiership-winning team but they evoked the spirit of the “Baby Broncos” of two decades ago who upset Wests Tigers with a heavily Origin-depleted side to etch their names into club folklore.

Despite fielding the youngest team in the NRL this year, they were way too strong for the Dragons to reclaim fifth spot from the Eels and Rabbitohs, who had skipped ahead of them earlier in the round, and are now looking all but certain to return to the finals after two years dwelling in the NRL cellar.

The Dragons were missing skipper Ben Hunt, in Maroons camp, but were otherwise at full strength and have now slipped out of the top eight and judging on Sunday’s form, will be lucky to avoid finishing among the also-rans for a fourth straight season.

The Broncos went into the clash with 10 first-graders absent with Oates, Kurt Capewell, Selwyn Cobbo and Patrick Carrigan on Origin duty while Payne Haas and Te Maire Martin headlined the list of injured starters.

“There was a lot of guys just waiting for that chance so I’m really happy for those guys who put the jersey on and did the club really proud and did themselves proud as well,” he said.

“It’s a great sign for others who are battling away and trying to make it in the NRL. If you keep a hold of your dreams and you keep believing in yourself and you keep working hard, some good things will happen to you.” 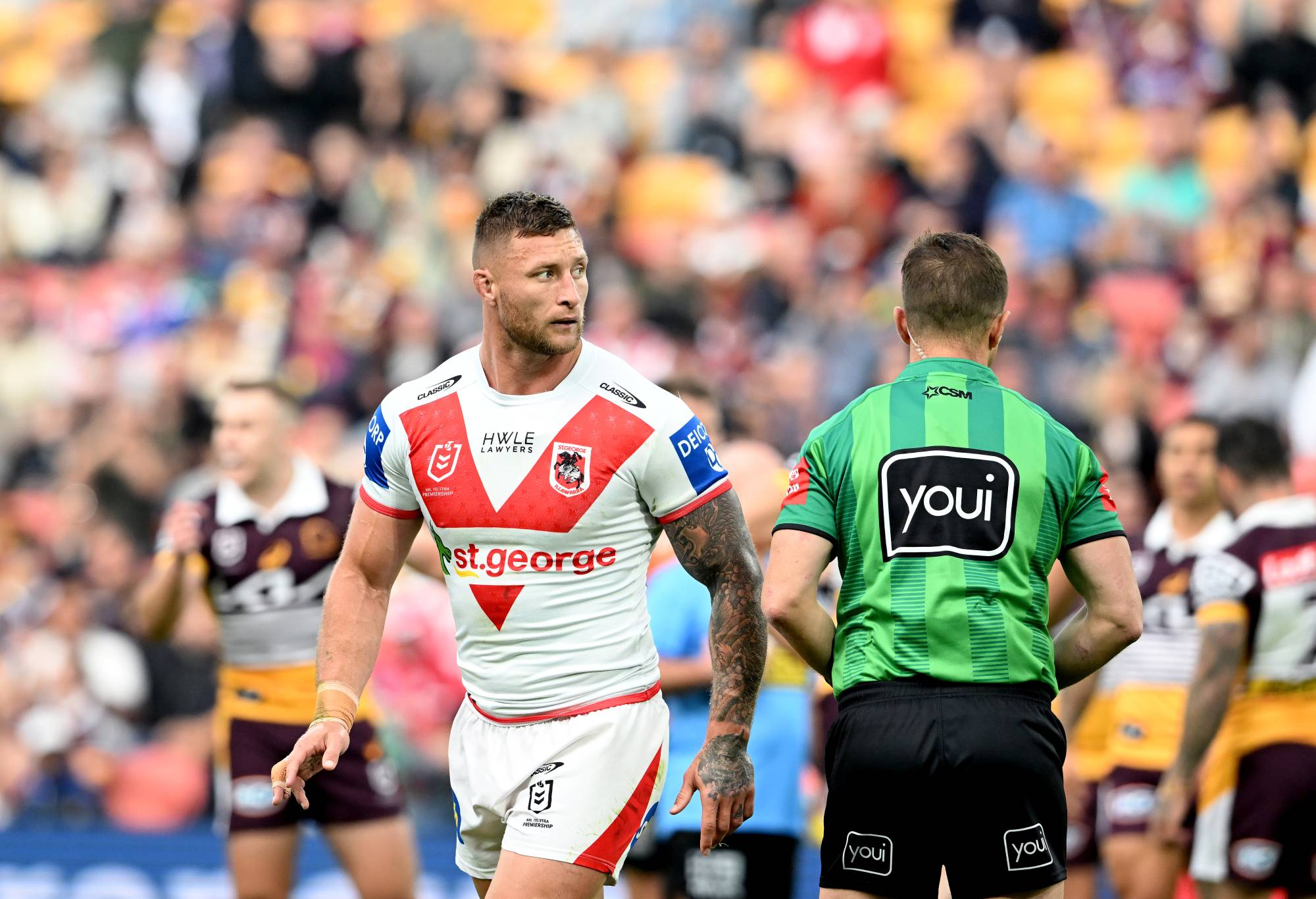 It cost the visitors a couple of minutes later when the Broncos exploited their overlap with centre Brenko Lee popping up a pass for Hoeter to bounce over out wide.

Hoeter was a late inclusion on the wing for the Suncorp Stadium showdown after Corey Oates was called up by Queensland due to COVID ruling Murray Taulagi and Cameron Munster out of Origin II on Wednesday night at the same venue.

Griffin denied they had concocted any plan to maim Reynolds.

“We didn’t have a tactic to tackle him late or get anyone in the sin bin. Like any half you play against you want to take their time away and unfortunately we gave away two or three penalties and copped 20 minutes in the sin bin for it. We were certainly not out they’re trying to foul him or attack him in any way,” he said.

“He got sin-binned so that’s what happened. I thought we did a reasonable job to play the first half a man down for 20 minutes.

“[Brisbane] were too good. They were harder at the ball than us, both sides of the ball.”

Reynolds said he was momentarily rattled by the first hit from Sims but apart from a slight feeling of whiplash, he was OK.

“I expect it. Every team does it, every team gets kick pressure on and tries to put a bit of pressure on the halfback,” he said.

Cody Ramsey turned on the afterburners to make Reynolds feel old on his 32nd birthday and the fullback outpaced the cover defence to give the visitors a 6-4 lead in the 17th minute.

Sims was banished back to the bin in the 25th minute for a high shot on bench forward Rhys Kennedy and the Broncos again capitalised on the next set, this time via Tesi Niu muscling over from short range for a 10-6 advantage.

The 12-man Dragons regained the lead in the 33rd minute when centre Moses Suli submitted his audition to be a rodeo cowboy, leaving four Broncos in the dust as he powered to the line.

Moments after Sims returned to the fray for the second time, Kotoni Staggs accelerated with an in-and-away manoeuvre which made Suli look silly and gave the home side a 16-12 half-time cushion.

Hosking got a debutant’s taste of NRL intensity early in the second half when he was laid out in a legitimate hit from opposing second-rower Jaydn Su’A.

Hoeter put the Broncos up 20-12 in the 50th minute when Zac Lomax and Mikaele Ravalawa were caught backpedalling close to the goal line with the winger crossing for a training drill four-pointer in the corner.

Sims was part of a game-ending incident when Broncos bench utility Cory Paix got his head in the wrong place in trying to tackle him but this time the former NSW forward was not in strife.

The Dragons team was in trouble a few minutes later when Brisbane lock Kobe Hetherington found a gap in the middle and Niu in support and the fullback sent rookie five-eighth Ezra Mam sprinting away for a 26-12 buffer, much to the delight of the vast majority of the 29,234-strong crowd.

Brisbane made it 32-12 midway through the second period when Niu’s cut-out pass sent Pereira galloping down the right flank before kicking infield as Staggs scorched across the Suncorp Stadium surface to score.

With Ravalawa limping off with a hamstring problem, St George Illawarra’s minute chances were shrinking by the minute.

Ramsey gave them a sniff eight minutes from full-time when he cashed in on a Jack Bird offload to reduce the gap to 14 but that was as close as they got.

Walters said the celebrations on the day for the 1992 premiership-winning team which beat the Dragons, a side in which he was a vital member at five-eighth, inspired his players.

“We had our day in the jersey, there were great times and we won premierships but what I’m really excited about is Adam and his team now coming through, they’ve got the same opportunity to get to wherever they want to get to. That’s up to them,” he said.

“When you run past old boys at a club and you see the successful ones, for me it’s very inspiring. Most of those guys, the older boys, would give anything to run back out in that particular replica jersey and our boys tonight really did them proud with their performance and we’re building for better times ahead, that’s for sure.”