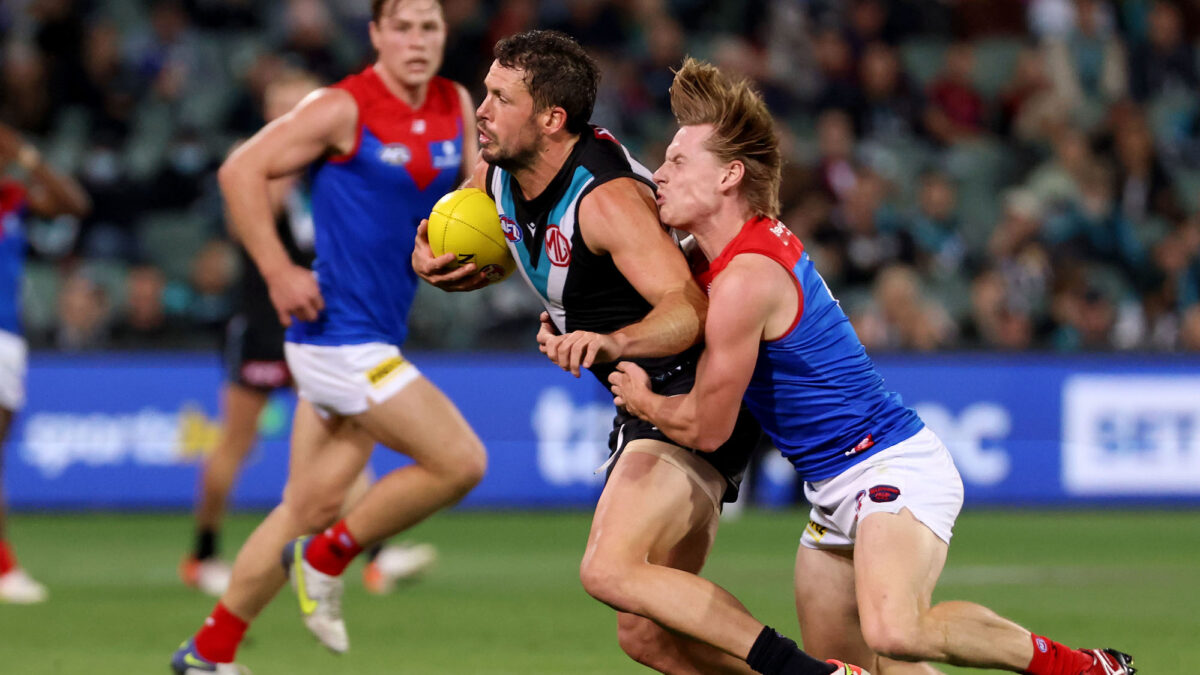 A common saying – though not, as it happens, ever said by Albert Einstein – is that the definition of insanity is doing the same thing over and over and expecting different results.

While the great physicist often has those words misattributed to him, the phrase seems tailor-made for the current state of affairs at Port Adelaide to start 2022. Sitting 0-4 and rooted to the bottom of the ladder after a ___-point drubbing at the hands of Melbourne, and their first ever goalless first half in the AFL, you could forgive Ken Hinkley for going a little nuts himself.

The Power’s 10-goal loss to Hawthorn a fortnight ago, despite an extraordinary domination of virtually every statistic, might have been a one-off shocker on its own; but every single aspect of that defeat reader its ugly head again, against a defence even more ruthless than the Hawks’ that night.

After a goal within the first minutes to Bayley Fritsch, the first term was the best of Port in their current state – that it brought zero goals tells you everything you need to know about their start to the year. Controlling territory with a 16-9 inside-50 count, their ball movement mostly sharp, there was just one thing wrong – that final kick into attacking 50.

If it wasn’t sure before, it is now: no player is more important to their team’s fortunes than Charlie Dixon is to this Port Adelaide outfit. Often maligned over the years as a flat-track bully, not without some merit, his absence through injury has left an enormous hole in the Power’s forward line.

Port had 15 kicks inside 50 in the opening quarter, for zero marks. Little wonder it took them until the final minutes of the third quarter to score their first goal, and from half-back Dan Houston launching from the 50m arc to boot.

The blame can’t solely be laid on the impact of forward duo Todd Marshall and Mitch Georgiades, both of whom looked excellent in last week’s Showdown. Admittedly against the most expertly drilled defensive web in the game, the Power’s ball movement offered Melbourne no challenges whatsoever.

Frequently stop-start, with very little flair or desire to take the game on, the Dees were content to let them chip around ineffectually outside 50 as they stacked numbers into defence, with the only result being to play Max Gawn – best afield with a whopping 11 marks – back into form as he took grab after grab. Luke Jackson, too, had a tremendous influence behind the ball.

“They’re going to have to create turnovers in more dangerous positions, because they don’t have the personnel to take big contested marks,” Channel Seven’s Jobe Watson said on commentary.

“They’re going to have to get the ball in their forward half, and force Melbourne into making errors that they can then score off.”

Pertinent advice against a team with sloppier ball use, but the Dees defenders know their limitations – and their strengths further afield. Where Port could never safely bomb long to a contest, the Dees could, content to know that even if Gawn and Jackson couldn’t mark, they’d be damn sure to bring the ball to ground level for the midfielders to wreak havoc. And with a staggering 43-25 contested possession differential in that first term alone, they certainly did.

If Ken Hinkley had asked Simon Goodwin before the game how he’d like the game to be played, he could hardly have followed those instructions any better. 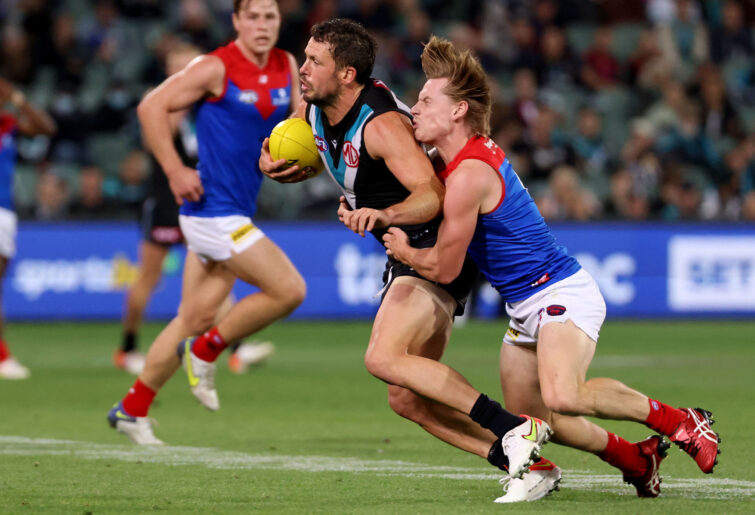 Travis Boak of the Power is tackled by Charlie Spargo of the Demons. (Photo by James Elsby/AFL Photos via Getty Images)

By the second term, having given up on any marking influence inside 50, the Power had resorted to long bombs from outside 50, which, as defender Tom Clurey’s running shot that fell short to be easily mopped up perfectly exemplified, wasn’t going to work any better.

It was ‘structured and stale’, as Watson described – and then, the Dees flipped the switch.

After one goal in a quarter and a half, five quickly followed as the Demons put the Power to the sword in stunning fashion. Ruthless out of the centre, marking everything inside 50 and finishing clinically, it was everything the Power had been unable to do in their brief period of ascendancy in the first term.

It wasn’t even the tall timber doing most of the damage, though – Tom McDonald booted only one goal, Sam Weideman was held well enough that Ben Brown should have no issues regiaining his spot in the team, and Jackson and Gawn’s influence was more defensive than offensive. But space opened up for James Harmes and Bayley Fritsch to capitalise, while twin free kicks to Ed Langdon and Jack Viney showed the looming lack of discipline.

An off the ball free kick on the half time siren, denying Marshall a shot at avoiding the Power’s AFL-first goalless half, couldn’t have summed it up better.

Too little too late, the Power opted for a more attacking bent in the third quarter, which briefly brought results – a barnstorming run from Mitch Georgiades towards goal the perfect example of how the Dees’ impeccable defence can be breached.

But it was at this point that the Demons tightened the screws ever further.

Continuing to dominate the clearances, helped by Gawn’s dominance over a wounded Scott Lycett and Ollie Wines’ mid-game bout of nausea., ensured the Dees could always find a goal whenever they so chose – but following that five-goal stint that broke the game before half time, Melbourne’s performance reached no further great heights. It didn’t need to.

Three goals in the final term, while enough to avoid Port’s lowest-ever score, shouldn’t come as any consolation to Hinkley or his players. If you want to search for positives, you’ll find some – Willem Drew largely curtailed the impact of Christian Petracca, Tom Clurey read the play nicely in the backline on return from injury, and they did restrict the Dees to just 18 scoring shots.

But the Power are in a rut. The solution? Perhaps one of Einstein’s actual quotes can help.

“We cannot solve our problems with the same thinking we used when we created them.”

The Power can’t keep going back to the well with their current game plan – 135 marks and 411 disposals for only four goals is more embarrassing than to put on that score having been smashed in the stats.

Dixon is out, and won’t be returning anytime soon, his ankle injury having re-flared during the week. A game plan tailored to his involvement isn’t workable with Georgaides, Marshall, and God forbid Sam Mayes as your pillars in attack.

But it’s not as if Port haven’t had success in other ways. Back in 2019, taking on reigning premier West Coast and intercept king Jeremy McGovern, a Dixon-less Power famously opted for ‘dirty ball’ inside 50 – scrubbing the ball along the ground and avoiding the sort of long kicks that proved so ineffectual on Thursday night.

The result? A famous 42-point victory, with ten individual goalkickers – and only two, Marshall and Paddy Ryder, were over 190cm.

Will that work in dry conditions? Who knows. But it can’t be any worse than what Port are currently dishing up.

Hinkley has shown tactical flair in the past, sufficient to get the Power out of the funk they’re in. Surely now it’s time to try something new – to not, well… even Einstein would have to say that’s insanity.