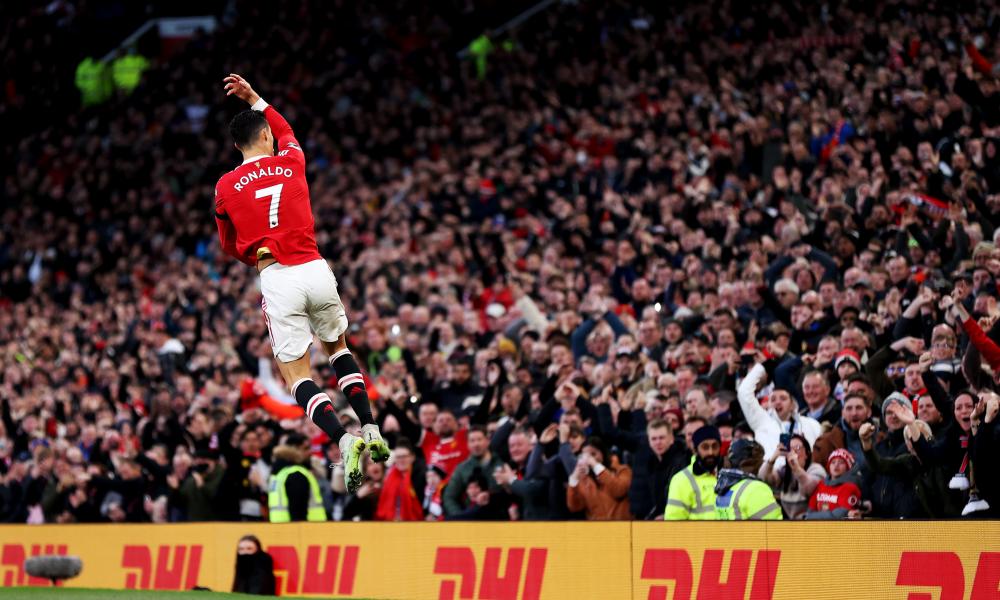 Manager wants supporters to be United’s ‘12th and 13th player’

Ralf Rangnick wants Manchester United fans to be the “12th and 13th player” on Tuesday night at Old Trafford when his team bids to knock out Atlético Madrid and reach the Champions League quarter-finals.

United have reached the last eight only twice since Sir Alex Ferguson retired in 2013 – the following year and in 2019 – and with the tie poised at 1-1 after the first leg Rangnick said he was looking for the home fans to make the same difference as they did in the 3-2 win over Tottenham on Saturday.

Related: Ronaldo continues to be a problem and a magnificent solution for United | Jonathan Wilson

“Quite like in the game against Spurs we need our players and supporters to be on top form on Tuesday night,” he said. “Our supporters play a vital role and it’s always a very special atmosphere at Old Trafford – even more so for international [European] games. They can be our 12th and 13th player on the pitch and make the difference – making it a very special experience for everyone. In the end it’s up to us, we have to create those moments and then the rest will come from our fantastic supporters.

“The supporters are the ones we can rely on and what kind of energy that happens [comes from them] is up to us. Antonio Conte said on Saturday that it was a very difficult atmosphere for them to play and that’s probably one of the biggest compliments you can get: if the opposition manager says that after the game.”

Alex Telles echoed Rangnick’s sentiment. “The support is extremely important,” said the defender. “If we play well the fans will always be behind us. We feel that when we’re at home. We have fantastic fans and they’re very positive and we react positively to that – that’s how it was against Spurs and I think it will be the same against Atlético: we’re really happy with the fans.”

Bruno Fernandes is set to return, having missed the Spurs win because of Covid. He has now tested negative. “That’s the reason why he could train today [Monday],” Rangnick said. “As it is right now we have all the players available tomorrow. There’s a small question mark over Luke Shaw – he was training yesterday [Sunday] and today. We have to wait and see if he’s fully fit to be available for the game. All the other players are back in training and available.”

The Champions League is the last competition United can win. Rangnick is intent that they progress to the next round to match the club’s status as three-times winners. “For us it’s about our own sporting ambition – we’re highly ambitious and we want to proceed and show we can compete with the best teams in Europe,” he said. “We have a fantastic opportunity to be in the top eight teams of Europe if we beat them on Tuesday and that’s exactly what we’re trying to achieve. The game against Tottenham showed the level we can play and with another 10 or 20% on top of that I’m sure we can win.”

Regarding Cristiano Ronaldo, who scored a hat-trick against Spurs, Rangnick has no concerns about the 37-year-old having to play again only 72 hours later.

“I’m not worried that he has not been able to recover,” the 63-year-old said. “So far he’s always been a person who looks after himself and his body and he knows what to do. I’m not worried about that. If he can score another three we will see. It’s not so easy to score three goals against this team at all. His overall performance was good if not even very good [against Spurs] and this is what we hope to get from him again tomorrow night. He’s still a very important player for this team and it will be good for us if he has a similar performance to the one against Tottenham.

“It’s not just about Cristiano – it’s about the whole team. We saw in the first half in Madrid [when conceding after seven minutes] what we shouldn’t do and how we should not play and this was obviously a big topic for us yesterday and today when we spoke about the game. We have to know what it takes: what it tactically takes and then the rest is about energy. We had a team against Spurs that just wanted to win that game, and it became obvious and the supporters played a vital role because they realised how much we wanted to win that game and tomorrow will be similar.”