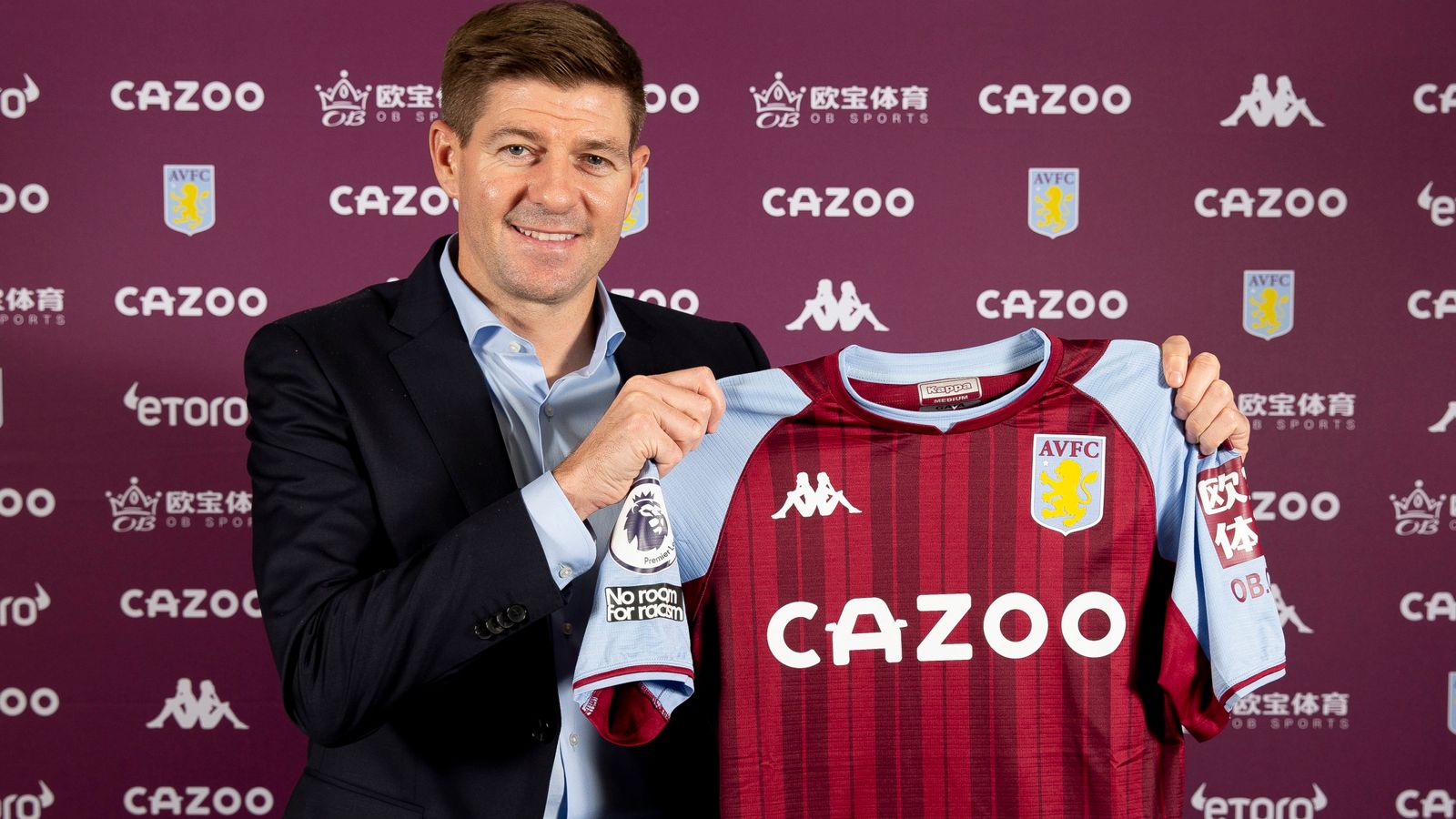 Steven Gerrard has been appointed as the new Aston Villa head coach on a three-and-a-half-year deal.

The former Liverpool midfielder left his role as Rangers manager to replace Dean Smith, who was sacked last weekend after a run of five successive defeats.

Compensation of between £3.25-4m agreed with the Scottish champions for Gerrard and his assistant Gary McAllister.

Gerrard said: “Aston Villa is a club with a rich history and tradition in English football and I am immensely proud to become its new head coach.

“In my conversations with Nassef, Wes and the rest of the Board, it was apparent how ambitious their plans are for the club and I am looking forward to helping them achieve their aims.

“I would like to express my sincere gratitude to everybody associated with Glasgow Rangers for giving me the opportunity to manage such an iconic football club.

“Helping them secure a record-breaking 55th league title will always hold a special place in my heart. I would like to wish the players, staff and supporters the very best for the future.”

Gerrard, 41, had been in charge of Rangers since June 2018 and led the club to the Scottish Premiership title last season, ending Celtic’s nine-year reign as champions.

Villa sit 16th in the Premier League table, two points above the relegation zone after 11 games of their campaign.

Gerrard’s first match in charge is set to be the Premier League match against Brighton on November 20.

Purslow said: “Since moving into coaching after his illustrious playing career, Steven began by managing and developing top young players in the Liverpool FC academy which is experience we value highly at Aston Villa.

“It has been very clear in our discussions with him that Steven’s coaching ambitions, philosophy and values entirely match those of Aston Villa.

“We are excited he has agreed to lead us in the next phase of our ambitious plans as we look to build on the progress made since Nassef Sawiris and Wes Edens took over the club in 2018.”

Rangers said they “flourished” under Gerrard’s management and helped build “outstanding, highly competitive playing squad which is capable of both winning and entertaining on all fronts”.

Chairman Douglas Park said: “I would firstly like to put on record my thanks to Steven for his outstanding efforts over the last three-and-a-half years at Rangers.

“He has provided us all with some unforgettable moments, not least his delivery of the Scottish Premiership title back to Ibrox last season having not lost a match in the entire league campaign.

“In European competition, he has restored the good name and credibility of our club on the continent and leaves us in a very healthy position on the pitch.”

Gerrard took to Instagram shortly after confirmation of his move to Villa Park to address the Rangers fans and said he hopes supporters would understand his decision to leave Glasgow.

“I want to say a heartfelt thank you to everyone associated with Glasgow Rangers, especially the fans, for the love and support you’ve all shown me during my time in Scotland,” his post said.

“Winning ’55’ will always hold a special place in my heart – each and every one of you played a part in that and, believe me, there will be many more to come.

“I hope in time you can understand and accept my decision to move on but I honestly fell in love with the club and will always follow the team.

“I think it’s a good deal for both parties, but maybe more for Steven Gerrard in some ways. It’s his first job in the Premier League, and to get a job as big as Aston Villa for your first job is fantastic. It gives him a real opportunity to push for European places.

“No manager is ever going to get one of the real plum jobs, so to get Aston Villa, one of the biggest clubs in the country who I class a top-10 club at least, I’d say it’s a good deal and a great job for Stevie.

“It would have been a difficult decision because of the timing, I think Stevie would have loved to have won another title and ended four years at Ibrox having won the league twice.

“The fact it’s halfway through a season and he’s straight into things at Villa may have torn him, but in terms of going from the Scottish Premiership to the Premier League, I just don’t think there is a decision, and that is just unfortunate for Rangers and Celtic, two of the biggest clubs anywhere.

“When a Premier League club comes calling, certainly the one of the size of Aston Villa, it’s a no-brainer.”

“What you have to remember here is the relationship between Christian Purslow and Steven Gerrard, they had dinner in London last night where the final details of the deal were worked out.

“Purslow worked very closely with Gerrard when he was still a player. He was Liverpool’s managing director from 2009 and they bonded at that point, and even then Gerrard had made it clear he wanted to go into management.

“Purslow clearly thought he had the attributes to make a good manager, and I think Villa have taken this decision looking at all the possibilities of who they might be able to attract, but deciding that Steven Gerrard is the best candidate going forward.”

Villa have appointed Gerrard but what is top of the agenda for the new man at Villa Park?

From gelling new signings, sorting out the defence, promoting youth and connecting with the fans, we leaf through Gerrard’s in-tray…