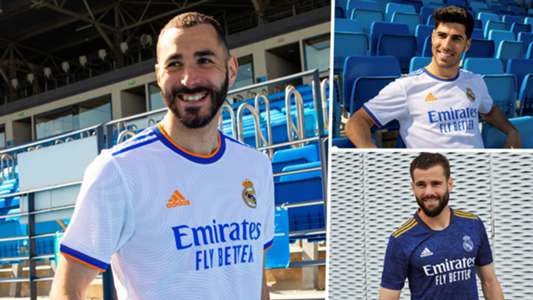 Real Madrid will be unveiling their latest kits under adidas throughout the summer, with the home jersey already having been released

Real Madrid may have finished the season trophyless for the first time since 2009-10, but the Liga side will be looking to gear up for next season and challenge for silverware and titles once more.

They will be dealing with the departure of head coach Zinedine Zidane from the club, with Carlo Ancelotti returning as his replacement.

Los Blancos will be a semi new-look side for the 2021-22 season, and they’ll be decked out in an all-new set of shirts by manufacturer  adidas.

Goal  takes a look at what Real Madrid will be wearing in the new campaign and release dates, as well as leaks and rumours about potential styles.

It features the club’s signature, classic all-white kit, but this time it features additional blue and orange accents for a more eye-catching pop.

The design for the latest home strip has been inspired by the city of Madrid, as well as the worldwide support for the team.

adidas combined the traditional Los Blancos white with a spiral design that symbolises the iconic Plaza de Cibeles fountains, an area in the city of Madrid where the supporters gather to celebrate victories and titles.

The kit, with its trademark white base, is accentuated by shades of orange and blue as a means to illustrate Madrid’s status as an urban and cultural hub. It also pays homage to adidas’ signature three stripes, with the corresponding logos and sponsors – still Emirates – on the front.

“Real Madrid is a unique team with a unique history. We wanted to keep the design of this season’s jerseys bold yet simple to reflect the expectation that comes with the badge, and that is to win,” said Marco Omiccioli, designer at adidas.

“With a meaningful reference to the Cibeles within the city and the colours of the stadium, which the clubs’ players and fans are proud to call home, we wanted to give supporters a sense of pride when they put on this season’s shirt. Real Madrid has always been a club cut from a different cloth, and this year’s jersey is no different.”

Real Madrid’s away kit was officially released on August 5, and is available to purchase via the adidas website and the club’s online store.

The design represents art, music and people –  the three pillars of culture in the Spanish capital – and has been inspired by the Malasana district, with an abstract graffiti graphic engineered into the fabric of the shirt.

The victory blue base colour is complemented by lucky orange stripes on the shoulders, with the loop label of the neck also in orange and embedded with a special art-inspired Real Madrid logo.

A series of high-performance recycled materials named PRIMEGREEN completes the makeup of the new jersey, with adidas’ temperature regulation innovation incorporated to keep the players cool on the pitch.

Real Madrid Women’s team will don the shirt for the first time today against Sparta Prague, while the Men’s team are due to model the away jersey in a friendly clash with Milan on August 8.

Real Madrid’s third kit sees them go back to the light-blue/turquoise look that they previously donned in their third kits in 2019-20 and 2017-18.

This season’s version sees the familiar base colour combined with black and white, with the adidas logo being a mixture of the two colours.

The famous three stripes and the Real Madrid badge itself are white, as is the sponsor logo on the front of the jersey.

It is topped off with a distinct, black crew-neck collar.

The third kit was officially launched on September 17, 2021.

How much will they cost & where to buy?

Fans will be able to buy the new Real Madrid kits from the club megastore, as well as the usual high street sports retail outlets.

Last season’s Real Madrid jerseys can be bought for £44 for adults.