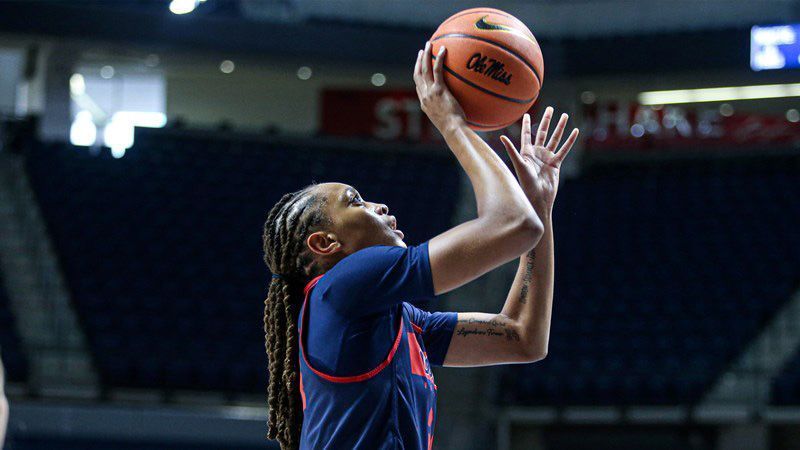 WEST PALM BEACH, Fla. – Ole Miss wrapped up the non-conference slate at the West Palm Beach Invitational with it’s toughest test to date against No. 18 South Florida and proved why its one of the hottest teams in the country with a 61-53 victory. The triumph over USF is Ole Miss’ first ranked win against a non-conference opponent since 2007. The Rebels extend their winning streak to 12 games, the program’s longest since 1991.

“Our defense wears people down so we don’t really have to press. Because, first of all, I’m going to play 10 people at least,” said head coach Yolett McPhee-McCuin. “So those shots they were making, they didn’t have the legs to make them when they needed to, and that’s because of our defense. And so, if you have to play us the next day, you can’t get rest, and you just play the game; you know you’re in for a fight because we’re going to wear you down for 40 minutes.”

It was a balanced attack from Ole Miss (12-1) with seven scorers finishing with five or more points. For the third game this season, Madison Scott led the Rebels in scoring as she recorded 12 points after shooting 6-of-8 from the field. After a monster performance off the bench yesterday with 24 points, Angel Baker followed up with another double-digit outing with 11 points. Off the glass, Shakira Austin carried the Rebels with eight rebounds and added eight points.

The Ole Miss defense continues to prove why it’s not only the best in the SEC but one of the best in the nation, forcing 14 turnovers from South Florida (9-4) and only surrendering 16 field goals to the Bulls. Despite allowing USF to drain seven triples, Ole Miss continued to hit shots when it needed to most as the Rebels shot 47.1 percent from the field for its sixth game in a row shooting over 40 percent.

Early on, it was clear to tell that a neck and neck battle was in store with both teams trading blows back and forth to end the first quarter tied at 12. Ole Miss came out of the gate together, with five different Rebels finding their way to the basket in the first ten minutes.

Scott proved to be the key component to the Rebel offense, with Austin sitting out most of the first half after picking up two early fouls. Facing their largest deficit of the day trailing by three, Snudda Collins provided a boost with the squad’s first three of the day to tie the game up yet again at 26 with a minute remaining in the second quarter. Two baskets from the Bulls in the last minute allowed them to carry a 30-26 lead into the halftime break, as Ole Miss trailed through two for only the second time this season.

Baker emerged out of the locker room ready to go, with back-to-back buckets even it all at 30. The Rebel offense started to get cooking with an 11-4 run to take its largest lead to date up by five with four minutes remaining in the third quarter. Ole Miss ultimately outscored USF 15-5 in the third.

Defensively, Ole Miss refused to let up on USF keeping them scoreless through the first six minutes of the fourth quarter. On the opposite end of the floor, Austin went to work in the paint to extend its lead by 12, up 47-35 with four minutes remaining. USF would not go away quietly, as a 5-0 run from the Bulls cut the Rebel lead to six with less than a minute remaining. Composed at the line, Lashonda Monk knocked down two free throws to ultimately cement a Rebel victory as Ole Miss toppled the No. 18 Bulls 61-53.

Ole Miss will enjoy a short break before diving into SEC play opening with Arkansas at the SJB Pavilion next Thursday (Dec. 30) at 6 p.m. CT on SEC Network +. The Rebels then begin the new year on the road Jan. 2, with an opportunity to make some noise against No. 1 South Carolina at 12 p.m. CT on SEC Network/ESPN2.