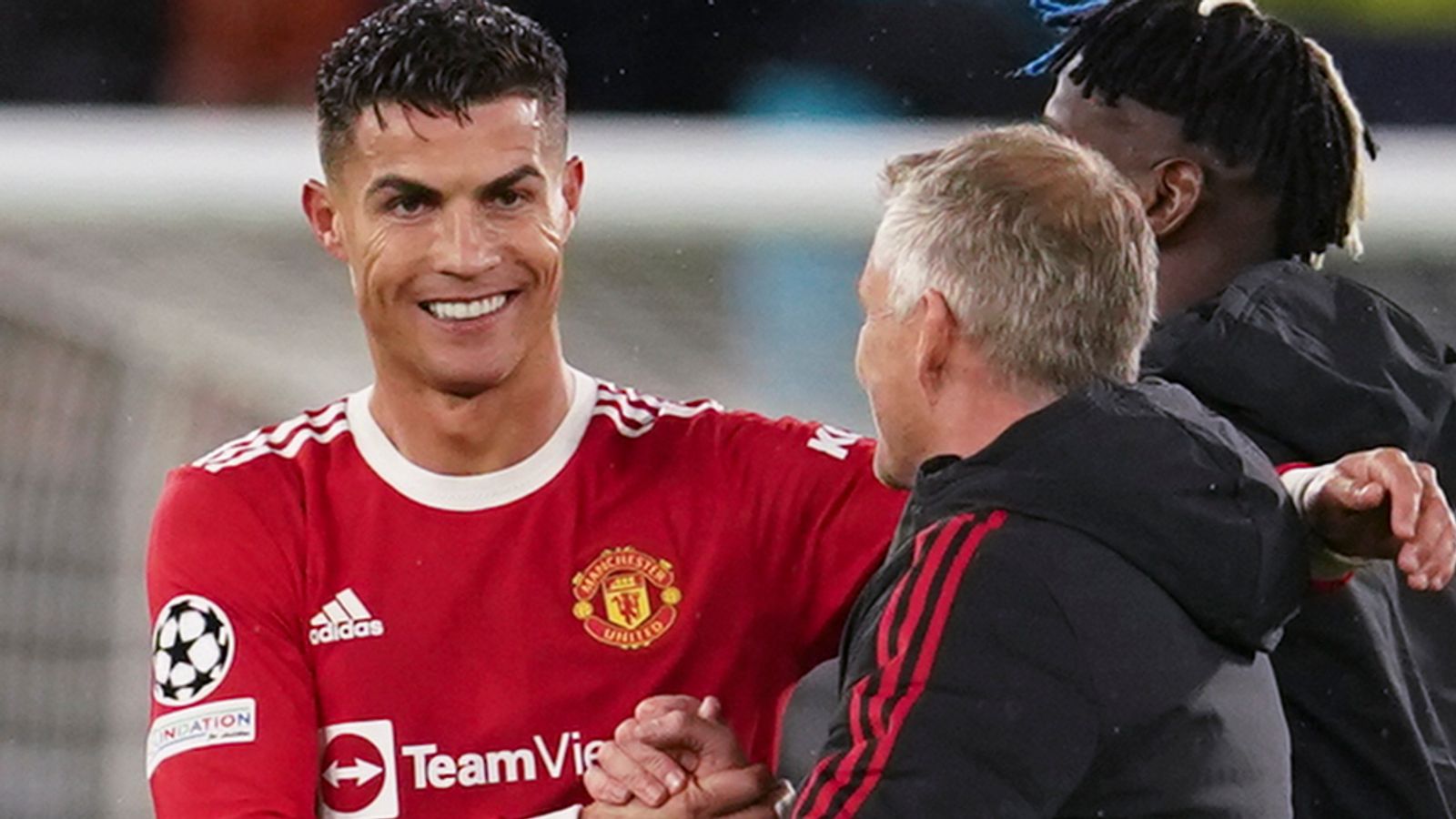 Cristiano Ronaldo’s dramatic late winner against Villarreal made up for Man Utd’s concerning display in the Champions League on Wednesday, while Chelsea couldn’t break down Juventus, and Barcelona lost again…

It was one of those mystical Champions League nights at Old Trafford. Fans were back inside the famous ground for European football for the first time in 18 months, and they spurred their side onto victory.

Their support was needed too. Manchester United lost in dramatic fashion to Young Boys two weeks ago to give them an uphill climb in a tight group, but the tables were turned this week when who else but Cristiano Ronaldo popped up with a winner.

It was exactly what the striker was brought back to the club to do – make a difference in those tight games.

It was an instinctive touch into his path from Jesse Lingard – atoning for his own calamitous error against Young Boys – and a well-taken goal from Ronaldo that shows just why he is considered one of the best ever.

Had United drawn against Villarreal, it would not have been disastrous, but it would have further piled on the pressure under which the club is already creaking. Now, they have a bit more breathing space ahead of a double-header against early leaders, Atalanta.

But there were still glaring areas of improvement for United. Diogo Dalot may be the second choice at right-back, but Arnaut Danjuma gave him the runaround every time he ventured down that wing.

Overall, you felt as if there was lots of individual quality on the pitch, but not much cohesion within the XI as a whole – Ronaldo barely saw the ball until he popped up with the winner – which was even more apparent against a well-drilled Villarreal.

It is an issue that Ole Gunnar Solskjaer will be keen to solve as consistency and cohesion remains lacking from an ambitious United side.

Romelu Lukaku was supposed to be the missing piece in the Chelsea jigsaw – and he probably still is.

However, what many people didn’t foresee coming was the service into the striker dropping in quality. For the second game running, Thomas Tuchel’s side carried little threat in the final third despite recording 73 per cent possession against Juventus. Yes, you have to factor in the level of opposition, but in 180 minutes against Manchester City and Juve, Chelsea have registered just one shot on target. It’s far too early for alarm but Tuchel needs to find a solution. From 37 crosses in the match, Chelsea found the head of Juventus defender – most often than not Leandro Bonucci’s.

Chelsea are blessed with players that should be in their element playing off a striker like Lukaku. Kai Havertz and Hakim Ziyech were the two chosen to provide the ammunition for Chelsea in Juventus but both played without spark or guile. Both failed to create a single chance for a teammate. Ziyech was hooked on 60 minutes and Havertz seemed more comfortable playing alongside Lukaku for the final stages when Chelsea created their two best chances of the match. Lukaku fired wide and Havertz headed over the bar.

Tuchel said: “We struggled to create our own rhythm because they were so deep and so passive. We struggled to find our own intensity, but this is what you need to do.”

The answer could be Ruben Loftus-Cheek, who confidently moved the ball in zippy fashion in another good cameo. However, he has flattered to deceive for years now after threatening signs of promise. Or perhaps Ross Barkley, who set up the late chance for Lukaku, can show Tuchel his best form?

Tuchel’s selection in behind Lukaku for the clash with Southampton on Saturday will be a tricky one for the boss. He needs to get his decision making right regarding his decision makers in the final third.

In a week in which Lionel Messi demonstrated he can still produce magical moments, scoring a fine first goal for PSG in their win over Manchester City on Tuesday, his former club Barcelona showed they are badly missing their former icon.

Ronald Koeman must feel the pressure mounting after seeing his side record their worst-ever start to a Champions League campaign by following up their 3-0 defeat in the opening round of games to Bayern Munich by losing by the same scoreline at Benfica.

The Catalans were behind after just three minutes and while they created dangerous moments of their own, their Portuguese hosts were always threatening and underlined the scale of the rebuild job required at Barcelona with two more second-half goals. Eric Garcia’s red card added salt to the visitors’ wounds, while Gerard Pique’s first-half substitution will be a talking point in the coming days.

Barca may be unbeaten in La Liga this term but draws with Cadiz, Granada and Athletic Bilbao have hardly inspired confidence or belief, and they face Atletico Madrid next up in what looks set to be another tricky examination of where they’re headed this season under Koeman.

Those glorious Champions League nights, when Messi was in Barca colours and weaving his magic for the club, suddenly feel a long time ago.

The 36-year-old’s inclusion comes in his first month back in England’s top flight, where he has made an instant impact with three league goals – including two on his debut against Newcastle.

Ronaldo, who returned to Old Trafford from Juventus in August, also scored in United’s 2-1 victory at West Ham on September 19.

He is one of six players up for the award, alongside compatriot and Manchester City defender Joao Cancelo, Chelsea’s Antonio Rudiger, Allan Saint-Maximin of Newcastle, Liverpool forward Mohamed Salah and Watford’s Ismaila Sarr.