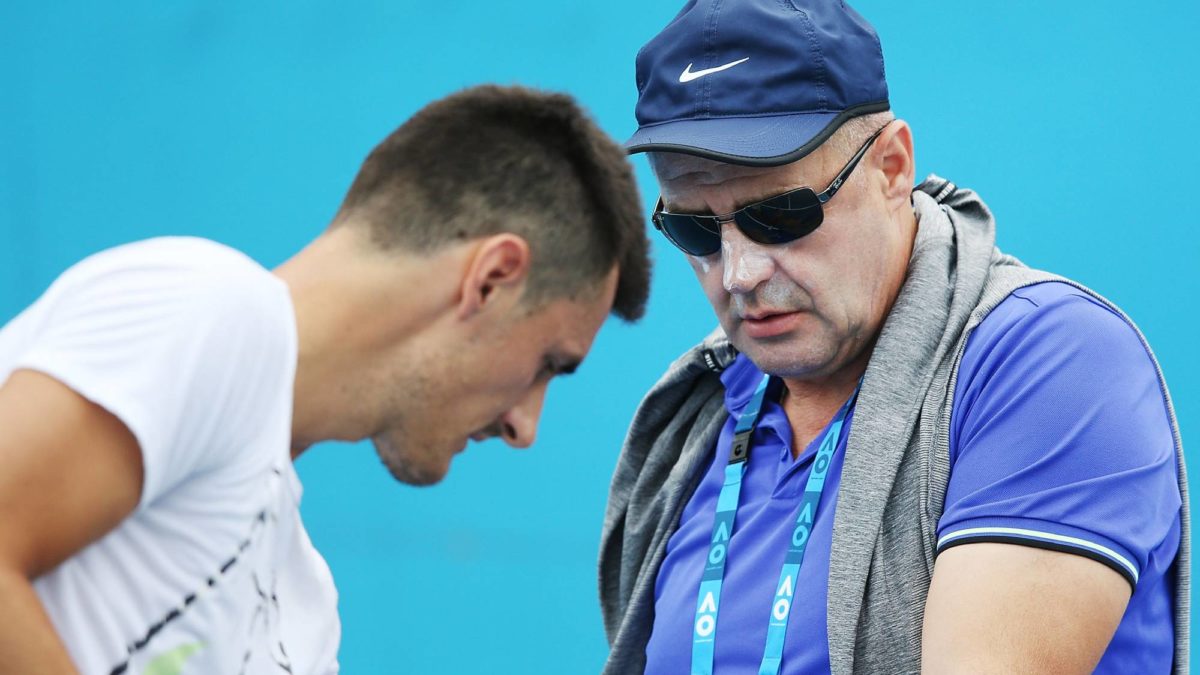 Bernard Tomic, described as a ‘great waste of talent’ by a former Tennis Australia boss, has revealed the brutal role played by his father John in his faltering career.

In a revelatory interview with the Sydney Morning Herald on Friday, Bernard Toimic described father John as crazy, and detailed the treatment he received over a number of years.

Tennis fathers have a notoriously bad name, and it’s no real surprise to hear Bernard’s story.

“I’m still scared of my dad,” Tomic told the SMH. “I wouldn’t want to be raising my kid the way I was raised.”

Bernard, however, defended John with the SMH saying the player – who lost in the Australian Open qualifiers while suffering from COVID this week – was “struggling to separate the emotions of appreciation and resentment” towards his dad.

“He’s done many things to me,” Tomic said in the interview. “He’s whacked balls at me, racquets and stuff. I mean, the guy is a crazy man, for sure. But he made me who I am today. It was discipline at 100 per cent.”

“When you look at it now, in a way I wouldn’t raise anyone like that. But I didn’t know any better. Parents can be a little bit … you know? He’s a good man and has a good heart and he put a lot of time and effort into making me who I am.” 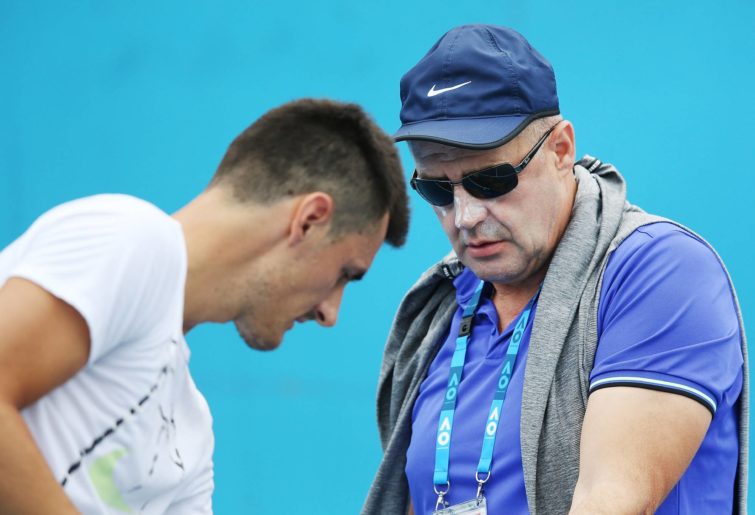 Former Tennis Australia president Steve Healy told the paper that they lost the battle to win Bernard’s attention over that of his domineering father.

“My impression was that Bernard wasn’t prepared to take control of his own career away from his father,” Healy said.

“His talent was immense, and it was obvious from a young age. But John controlled the money. John’s take was, ‘Give us the cheque and we’ll take care of everything else’. But our position was that there are conditions attached to the provision of support.

“He wouldn’t agree to meet them. He wouldn’t let go. John controlled Bernie emotionally. It was just such a domineering presence. John would just never get out of the way. There’s a great waste of talent.”

While fans and AO organisers await the government’s decision on whether to let Novak Djokovic defend his title, Australia’s Immigration Minister Alex Hawke has been smashed for taking too long over his call.

The world No 1 was named Thursday in the draw for the tournament, to face Serbian compatriot Miomir Kecmanovic in the first round. A final decision on his involvement is expected Friday.

“Why does this keep dripping out of the tap?” Independent Tasmanian senator Jacqui Lambie said on TV on Friday.

“It’s about time to stop this debacle, finish it once and for all. Alex Hawke, where are you? Missing in action?

“If you can’t make a decision on Novak Djokovic, goodness me, how are you guys running the country? This is an absolute shambles.”

Four-time grand slam champion Naomi Osaka is the world’s highest-paid female athlete, with Australia’s world No.1 Ash Barty also in the top 10, according to a list published by Forbes magazine.

Osaka raked in $US57.3 million ($78.7 million) in prizemoney and endorsements over the past year, nearly all of which came from an endorsement portfolio that has added more than 10 brand partners over the last year and a half.

Barty, who was eighth on the list with $US6.9 million, made more on the court than any other women’s tennis player in 2021.

The list was published after a year in which Osaka withdrew from the French Open to focus on her mental health amid a public row over mandatory press conferences at the grand slam, saying they took too great a toll on her mental wellbeing.

Osaka – drawn to meet Barty in the fourth round in Melbourne should both advance – is heading into the 2022 Australian Open as the defending champion and with what she says is a fresh outlook on tennis.

“I feel like, for me, I only really have one major goal this year, and it’s completely unrelated to results and stuff like that,” Osaka said.

“For me, I just want to feel like every time I step on the court … I’m having fun. I can walk off the court knowing that even if I lost, I tried as hard as I could.

“Also, I have a goal in the press room that I’m never going to cry again. So hopefully that works out in my favour.

“During the offseason, I just hung out with my friends and talked to my family a lot. I felt like that was a way of decompressing the pressure I had on myself. Then I just slowly started to regain the feeling of love that I had towards the game.”

World No. 4 Stefanos Tsitsipas says Novak Djokovic refusing to get vaccinated and “playing by his own rules” makes the majority look like “fools.”

“The stats say 98 per cent of players have been vaccinated and did what they had to do in order to come and perform and play in Australia,” Tsitsipas told WIO News.

“One side of it is, yeah we’ve all followed the protocols in order to compete in Australia, we’ve been very disciplined in that part. “The other side, I’d say that it kind of seems like not everyone is playing by the rules of how Tennis Australia and the government have been putting things.

“A very small group chose to follow their own way and it kind of makes the majority look like they’re all fools or something.

“For sure he has been playing by his own rules and has been doing something that not many players had the guts to go and do, especially after the ATP announced certain criteria for players to enter the country.

“No one would have really thought I could come to Australia unvaccinated and not having to follow the protocols that they gave me, which takes a lot of daring to do, and putting a Grand Slam at risk. I don’t think many players could do that.

“I chose to go and be 100 percent ready for whatever was to come and not having to think about anything else. “For me, it worked one way, for Novak, it worked another way. That doesn’t really mean that my way is the right one and his way is the wrong one, it’s just each person’s perception about it”.

In-form Australian Thanasi Kokkinakis and a host of his countrymen will have to draw upon their fighting spirit after being on the receiving end of a brutal draw at the Australian Open.

Wildcard Kokkinakis has drawn a qualifier first up but should he progress is likely to have to face 20-time grand slam winner Rafael Nadal.

Australia’s top-ranked men’s player, world No.34 Alex de Minaur, is on a collision course with world No.8 Casper Ruud in the third round, while Nick Kyrgios could face world No.2 Daniil Medvedev in round two.

If James Duckworth makes it through to the second round, he is likely to face world No.10 Hubert Hurkacz.

Kyrgios, who has drawn a qualifier first up, faces arguably the biggest challenge, given that he hasn’t played any lead-up events after testing positive to COVID-19.

Kokkinakis has taken on Nadal once before – in the second round of the 2014 Australian Open.

“It was a pretty cool experience,” Kokkinakis said.

“I thought I didn’t do too bad, honestly. I had like a little sniff here and there. Obviously, he was the way better player.

“I had a couple chances. He’s so resilient. What he’s been able to do over the years is nothing short of impressive. He’s one of the best competitors there is.”

Kokkinakis was set to take on Nadal in the second round of the 2019 US Open, but he was forced to withdraw with a torn pectoral.

“I wasn’t in good shape. I was pretty shattered I had to miss that,” Kokkinakis said.

“It would be good if I could win (the first round) and get another shot at him.”

In the first set alone, Kokkinakis blew nine break point opportunities, and he literally beat himself up over the missed chances.

“I did slap myself in the face,” Kokkinakis said.

“I have a bit of a headache because I hit myself in the head with my racquet a few times. Probably harder than I should have.

“I reckon I’m feeling it to be honest.”