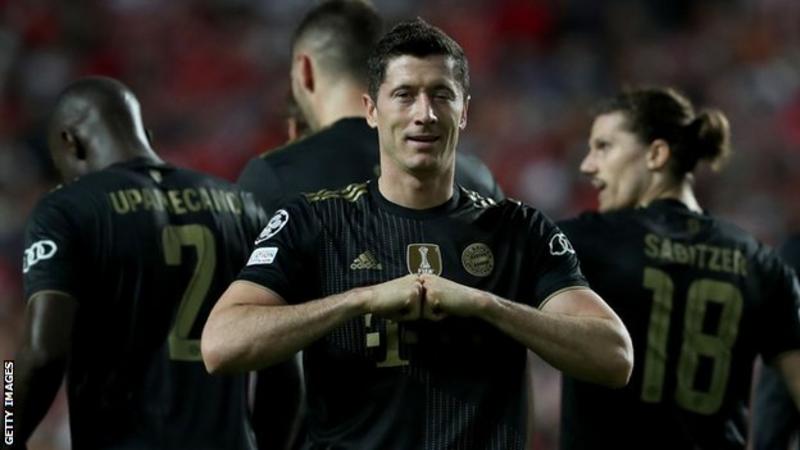 Lewandowski, 33, claimed the prize for the second consecutive year after scoring 69 goals.

He won ahead of Liverpool’s Mohamed Salah and Paris St-Germain’s Lionel Messi.

Ronaldo was lauded for being the men’s international all-time top scorer.

Lewandowski broke the late Gerd Muller’s 49-year record for scoring the most Bundesliga goals in a calendar year with 43 in 34 league appearances.

Chelsea boss Thomas Tuchel won the award for the Best Fifa men’s coach for guiding Chelsea to their second Champions League title after only joining the club in January.

Former Tottenham winger Erik Lamela – sold to Sevilla in the summer – won the Fifa Puskas award, which recognises the best goal in world football during the year, after his ‘rabona’ finish in the north London derby against Arsenal last March.

Chelsea’s Edouard Mendy won the award for the Best Fifa men’s goalkeeper after a successful first season with the club, including a clean sheet in the 1-0 win over Manchester City in the Champions League final.

The Denmark national team and their staff won the Best Fifa fair play award for their swift response after Christian Eriksen collapsed on the field during the Euro 2020 game with Finland.

On a successful night for Chelsea, Emma Hayes also won the award for the Best Fifa women’s coach as her side won a treble of domestic trophies.

As for the collective awards, Manchester City’s Ruben Dias and Kevin de Bruyne joined Chelsea’s N’Golo Kante and Jorginho, and Ronaldo, in the Best Fifa men’s team of the year.

Lewandowski defends crown
The Polish striker was overlooked for the Ballon d’Or as Messi won it for a seventh time in November, but the Best Fifa award will provide some consolation.

Lewandowski was influential as Bayern defended their Bundesliga title and won the Club World Cup and the German Super Cup.

Speaking via video link after receiving the award, he said he never dreamed of breaking the record set by Muller, who died in 2021.

“If you you asked me a few years ago, I would have said it is impossible to break that record and score that many goals in the Bundesliga,” said Lewandowski.

“But now he (Muller) is not with us anymore and I also say thank you to him because this record would not be possible without him. He set so many – and for the next generation of players it was to try and beat it.”

Ronaldo hopes to play ‘four or five’ more years
While two-time men’s winner Ronaldo was omitted from the shortlist for the individual prize for the first time since its inception, it was a successful night for the Portugal captain, who was given the special award after surpassing Ali Daei’s 109-goal record for Iran.

The 36-year-old set a new international mark after scoring his 115th goal in 184 appearances for Portugal in October.

Speaking live at the ceremony in Zurich, he described the trophy he was presented with as the “bling bling”.

“I never thought I would set that record,” said Ronaldo. “I’m so proud and this is a special award from Fifa, an organisation I respect a lot.

“I’m really proud and it is a great achievement. I still have the passion for the game. Not just to score goals but to entertain.

“When I go to the pitch, even in training, my motivation is still there. I’m going to be 37 soon but I feel good and I want to continue.

“People ask me sometimes how many years I have left and I hope to play four or five years as it’s a mentality. If you treat your body good, when you need your body, it will give you back.”