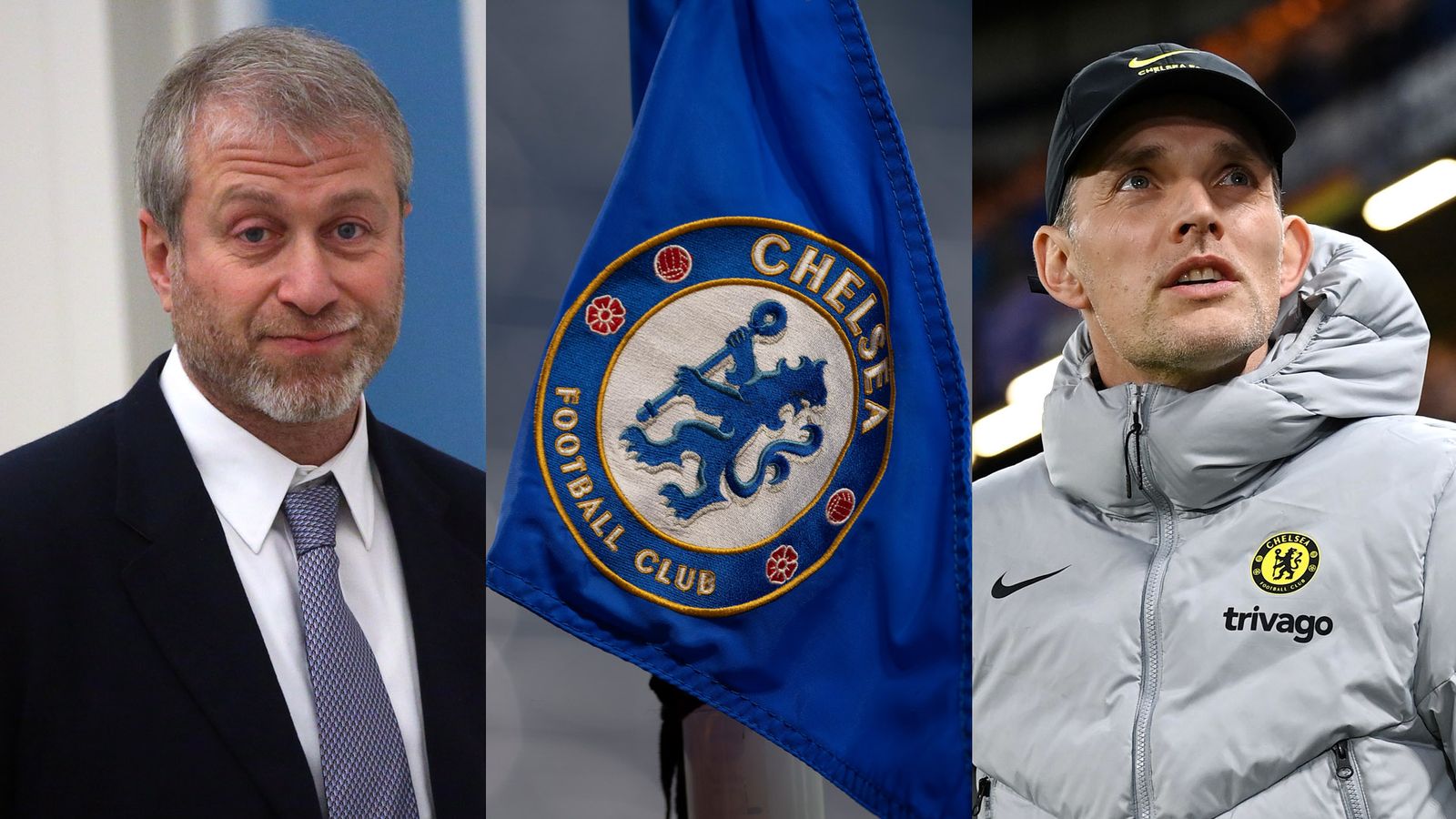 Chelsea can now spend up to £900k on match-day costs, up from £500k; club can receive prize money this season; Merson: “If I was Man Utd, I would be all over Thomas Tuchel”; Sir Martin Broughton, who once rescued Liverpool from a bitter boardroom battle, in talks for rescue bid

Roman Abramovich has been disqualified as a director of Chelsea by the Premier League board but the sale of the club is expected to progress with Government oversight.

The sanctioning of Blues owner Abramovich by the UK Government on Thursday saw the Russian-Israeli billionaire’s UK assets frozen, including Chelsea, which stalled proceedings.

Chelsea have been handed a new licence to continue operations, however, and the European champions are still locked in negotiations with the Government to ease restrictions.

Chelsea are now allowed to spend up to £900,000 on match-day costs, up from £500,000, following talks between club officials and the Government.

Travel costs for away games remain at £20,000 but the club can receive prize money this season from the competitions they are competing in, with further changes expected in the coming days.

The Government reiterated they are open to issuing a further licence to allow a sale of Chelsea to proceed.

A Government spokesperson said: “The Government is open to a sale of the club and would consider an application for a licence to allow that to happen.

“We are absolutely clear that any such licence would not allow Roman Abramovich to benefit from the sale.”

New York merchant bank the Raine Group has now assessed the terms of the licence and agreed a route forward for the sale with the Government, the PA news agency understands.

The Premier League board’s decision to disqualify Abramovich is unlikely to have any real impact given the sale process was already under way. It does not affect Chelsea’s ability to play matches.

Abramovich put Chelsea up for sale on March 2, pledging to write off the Blues’ £1.5billion debt and to divert all proceeds to a new foundation to benefit victims of the war in Ukraine.

The 55-year-old moved to sell Chelsea after 19 years at the Stamford Bridge helm, amid Russia’s continued war in Ukraine.

The Government sanctioned Abramovich after claiming to have proved his direct links to Vladimir Putin’s Russian regime, although Chelsea’s owner has always denied any association.

The Raine Group’s progression of the sale means Chelsea’s suitors can again push forward with their bids to take control of the European and world champions of the club game.

Abramovich was understood to have been ready to work with Government oversight on the sale and, now the Raine Group has completed suitable checks, the interested parties can press on.

If I was Man Utd, I would be all over the manager Thomas Tuchel. He’s top drawer, I don’t care what anybody says. He’s world class, and I would be tapping him up straight away.

Whoever buys this club will have to love Chelsea Football Club like Abramovich did. If they don’t, it’s just going to fizzle away.

Chelsea’s biggest hope is that it’s a Chelsea fan buying it. I don’t see anyone else coming into the club again and spending that kind of money.

I worry for Chelsea now. It was in a song: “When you’ve seen such riches, you can’t live with being poor.”

I don’t where the money is going to come from: I don’t see anyone spending the money Abramovich has been spending.

In terms of players and raising funds, someone could come in and buy the club and sell five or six players straight away for £400-500m! I hope that doesn’t happen. Now, as a Chelsea fan, you don’t know what you’re going to get, it’s like a bag of Revels.

Sir Martin Broughton, the British businessman who rescued Liverpool from a bitter boardroom battle a decade ago, is in talks to spearhead a rescue bid for the club.

Sky News has learnt that Sir Martin, a lifelong Chelsea fan, has held discussions in recent days about playing a role in bids being prepared by Todd Boehly, the LA Dodgers baseball team’s part-owner, and Josh Harris, a backer of the Philadelphia 76ers basketball side.

The former British Airways chairman is also negotiating with potential financial backers about tabling his own bid, as a field of international suitors circles Chelsea ahead of a deadline for offers next week.

Jonathan Goldstein, a London-based investor who owns the Prezzo chain of restaurants, is part of Mr Boehly’s consortium.

Mr Goldstein runs Cain International, a property and development group that could be instrumental in revamping Chelsea’s Stamford Bridge home or the construction of a new stadium.

British property tycoon Nick Candy has also confirmed his strong interest in buying the Blues and is in the process of building a consortium.

Chelsea saw several credit cards temporarily frozen on Friday amid a frenzied day of negotiations with the Government over the terms of their new operating licence.

Downing Street chiefs are ready to amend the terms of the licence so Chelsea can operate as normally as possible while ensuring Abramovich does not profit.

But Chelsea argue that Abramovich did not profit from regular operations anyway, so are hopeful of a swift restoration of a number of currently restricted concerns.

Chelsea cannot sell any new tickets, leaving fans who have not got season tickets or pre-purchased tickets unable to attend future matches.

The Blues cannot sell any merchandise, including new match programmes, meaning vendors will not be able to work their shifts in Sunday’s Premier League clash against Newcastle at Stamford Bridge.

Chelsea’s players, meanwhile, are determined to show how committed they are when they play Newcastle United on Sunday despite the uncertainty surrounding the club.

A source close to the dressing room told Sky Sports News: “Now is the time to stick together until the storm passes. The club are working hard to stabilise the situation and minimise the impact of what is happening.

“Now is not the time to be speculating about your future. No one is thinking about the transfer market at such a difficult time for the club. The squad is focusing on football and staying strong together.”

Tuchel: Hard to focus on football | We are privileged

Chelsea boss Thomas Tuchel has told Sky Sports it is “hard to focus only on football” amid Russia’s invasion of Ukraine and feels “very privileged” to be a Premier League coach.

Chelsea owner Roman Abramovich was hit by sanctions from the UK government on Thursday morning – resulting in the Russian-Israeli billionaire’s assets being frozen, plus “a prohibition on transactions with UK individuals and businesses, a travel ban and transport sanctions”.

The sanctions are intended to stop the 55-year-old from making any money in the UK, but the government has granted Chelsea a special licence to allow fixtures to be fulfilled, staff to be paid and existing ticket holders to attend matches.

However, Chelsea cannot offer new contracts to players or staff, conduct any transfer business or sell new tickets to matches as things stand.

Tuchel said after Chelsea’s 3-1 win over Norwich on Thursday he is “still happy” to be head coach but admitted he “cannot influence” the situation.

In an interview with Sky Sports’ Geoff Shreeves ahead of his side’s Super Sunday clash with Newcastle, the German was asked what he has had time to reflect on in challenging circumstances.

“Maybe it has never been more true to live in the moment because everything else seems very, very difficult,” he said.

“To understand the situation feels very difficult, to see where it is going is maybe impossible. So in the end we stick to the mantra to live in the moment and worship where we are.

“It is not easy, but it is out of our control. Sometimes it makes things more difficult, but sometimes more easy to accept we cannot do anything in the moment, to wait and to constantly adapt.”