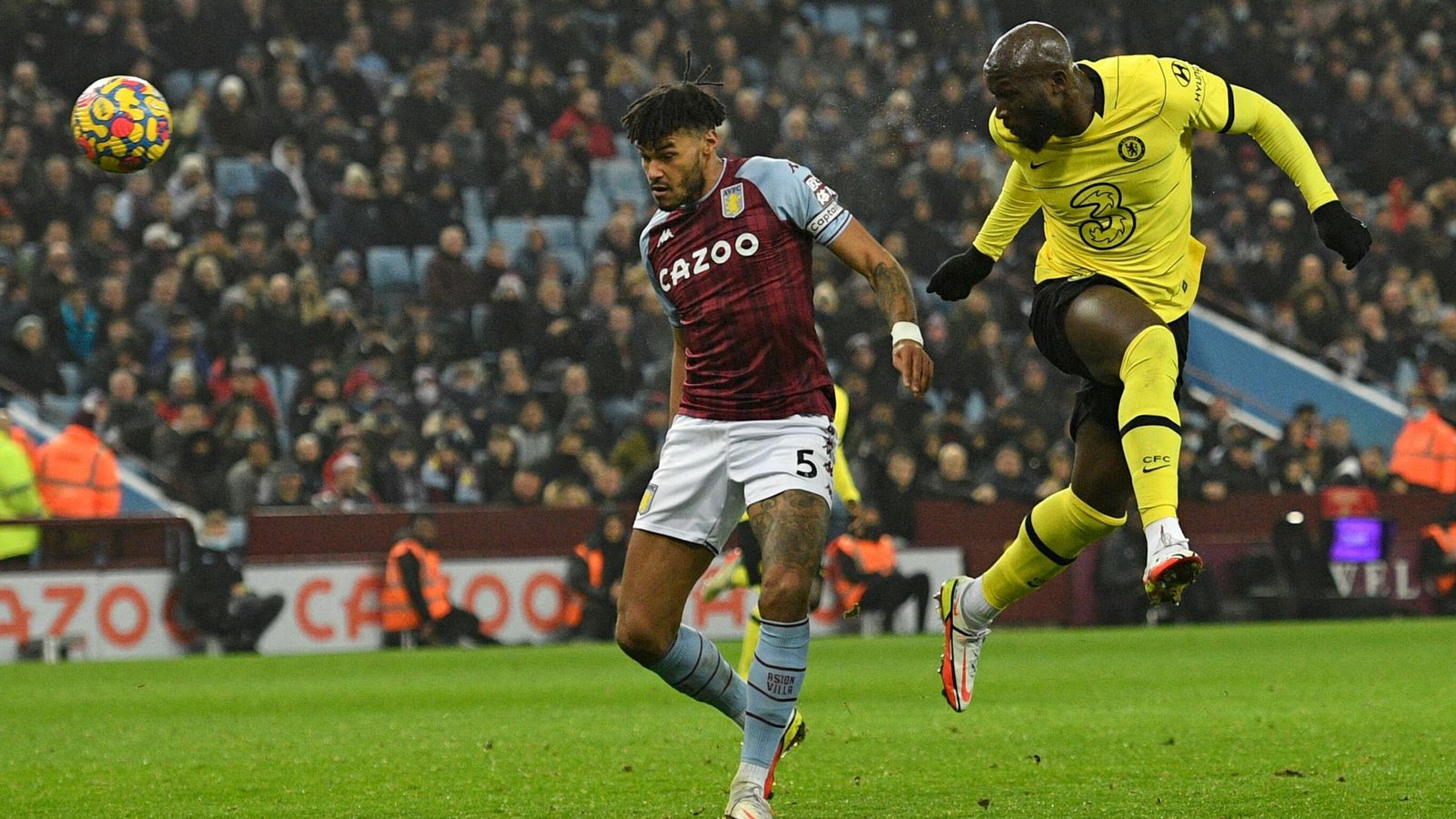 Romelu Lukaku stepped off the bench to score one and then win a penalty as Chelsea beat Aston Villa 3-1 to go level on points with Liverpool – who have a game in hand – and stay six points behind Premier League leaders Man City. Jamie Redknapp says Belgian key to Blues’ title hopes

Romelu Lukaku has hauled Chelsea back into the Premier League title race, says Jamie Redknapp, following the striker’s big impact in the win over Aston Villa.

The Belgian – who hasn’t started any of Chelsea’s last 11 in the league due to injury and illness – was sent on at half-time with the score 1-1. Within 11 minutes he’d headed them in front with his first league goal since September. He then capped an eye-catching performance with a driving run to win a late penalty to wrap up a vital three points.

With Manchester City winning earlier on Boxing Day, Chelsea couldn’t afford another slip-up and they are now level on points with second-placed Liverpool – who have a game in hand – and six points behind the defending champions.

It is still a big task for Chelsea to return to top spot after disappointing results in recent weeks, when they’ve failed to turn dominance into goals. However, Redknapp says that with Lukaku back fit, they are right in the mix.

“Lukaku has single-handedly got his team back in this title race,” said the Sky Sports pundit.

“They needed something, they needed a spark and that’s exactly what he brought. In the first half they were going nowhere fast, the manager was scratching his head thinking ‘what do I do?’.

“The obvious thing was to bring him on, because they struggled so much with Christian Pulisic in the first half as that No 9.

“Tyrone Mings and Ezri Konsa had bullied Pulisic. It was too easy for them. But when Mings crashed into his goalkeeper a minute after Lukaku came on, they knew they were going to be in a fight for the next 45 minutes. That set the tempo.

“From minute one when he came on he just made such a difference. He added that confidence. Everything started to click.

“You could play from deep, you could play it in behind, he gives you that focal point and you can pop it into him… He gives them something completely different.

“They looked a completely different proposition with him up front and when they can get their best players on the pitch – N’Golo Kante, Lukaku – Chelsea look a much better side. And of course, they’re right in this title race.

“City and Liverpool are right now, for me, the best teams, but Chelsea have to hope City maybe have a blip or things don’t go their way.

“But if Chelsea are to win it, Lukaku is going to play a massive part.”

Lukaku has been blighted by an ankle injury and then Covid-19 since October and while Tuchel was delighted with his impact, he said it was “not fair” to force him back into action for a full half.

Tuchel said: “There is no doubt he is super-important. Romelu will be a key player. Last time he started for us was in October, not because of quality or that we have any doubts we are better without him. He is unlucky to get injured.

“When he was struggling to come back in the schedule we have, he caught Covid. It (45 minutes) was more than the fitness and medical department recommended for him but we thought we could take the risk and be more offensive.”

Lukaku: We are the hunters

Chelsea led the Premier League in the early part of this season but now they must make up ground on Manchester City. However, Lukaku says they will relish their role as ‘hunters’.

Speaking to Sky Sports after the win at Villa, he also referenced his frustration at being stuck on the sidelines.

“I think I needed a performance like this today, it has been difficult as every player wants to play,” he said.

“The manager has his reasons but I kept working hard. Today it was good for us to win, and I am happy with my performance.

Tuchel: It’s a big win but demands ‘not fair’ on COVID-hit squad

Thomas Tuchel praised Lukaku’s performance after the game – but says it was not ideal to play him, with the striker only just getting over COVID.

Tuchel also highlighted how his squad has been stretched and his players left vulnerable to injuries by the current combination of lots of games and illness in the camp, pointing to problems sustained during the game by Thiago Silva and N’Golo Kante.

“It’s a big victory. The reaction was very, very good, and the mentality was outstanding,” he said. “We did not allow any chances and created a lot of chances. Job done, but we are worried. We have another injured player. We play against a team with no international duty. At some stage it’ll catch us.

“It’s not fair today. He [Lukaku] had a very good performance, he was very helpful, but it’s not fair. He’s not ready for that even if he wants it.

“We’ve all been in bed for 10 days with flu. I did not play two days later a match at Villa Park – we don’t know what happens from that. We just put the players in but we don’t know [what the impact is]. He was a game-changer today. I’m super impressed with the guys but I’m super concerned.

“It is hard, we are struggling, we are pressing our players. It is very hard to demand it. I have maximum respect for what the players did today. It’s a fantastic result and the effort was outstanding.

“We do changes because of injuries. We don’t change for tactical reasons anymore. We took the risk to let Callum Hudson-Odoi start, so he can share minutes with Lukaku but Kante again was injured, Silva was injured.

“We have only three [subs]. It backfired on us. Hudson-Odoi was outstanding today, one of his very best performances since I’ve been here. But still, we were even in doubt he can play one half but he ends up playing 90 minutes because he needs to.”

“Lukaku’s impact at Villa was a reminder of his debut against Arsenal, bringing quality finishing to an all-too-often wasteful Chelsea attack, and pace and power to the frontline.

“His header was his first Premier League goal since September, back when Chelsea won five of the seven league games he has started in this campaign.

“Chelsea only dropped points to Liverpool and Manchester City during that run, and they meet those sides again in back-to-back league games at the start of January. It will be the defining moment in Chelsea’s title challenge.

“With Lukaku fit and finding his form before those blockbusters, Chelsea can believe again.”