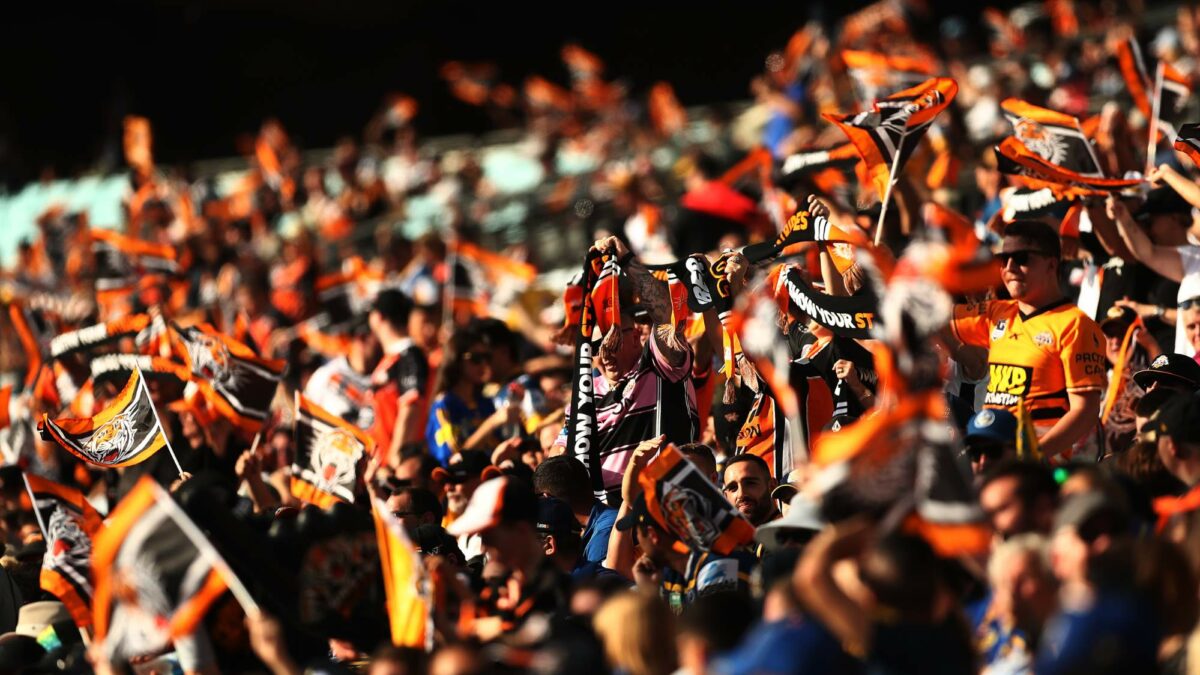 This is the tenth article in the series with which I’m paying tribute to the pioneers of each of the 11 surviving clubs that entered the league since I began following the game back in the 1960s and tell you a little about who they were and where they came from.

Today I look back at an unhappy marriage of 22 years, the Wests Tigers.

Wests Tigers were formed as a joint venture club between the Western Suburbs Magpies and the Balmain Tigers in mid-1999 as preparations began for the 14-team NRL premiership in 2000. Both clubs were struggling for survival at that time, with Wests coming off back-to-back wooden spoons in 1998 and 1999 and the star-studded Balmain line-ups of the 1980s a very distant memory. Neither club had the financial clout to compete for players in the post-Super League market.

Initially both clubs appeared to be headed for mergers with other more financially secure partners, Balmain with Parramatta and Wests with Canterbury, but at the last moment the two foundation clubs decided they had more in common with each other and the deal was done.

Here’s the team that took the field in the joint venture’s very first game against Brisbane, the season’s eventual premiers, at Campbelltown on 6 February 2000, ending in a 24-24 draw.

Numbers in brackets are the total first-grade games the player played for the West Tigers. 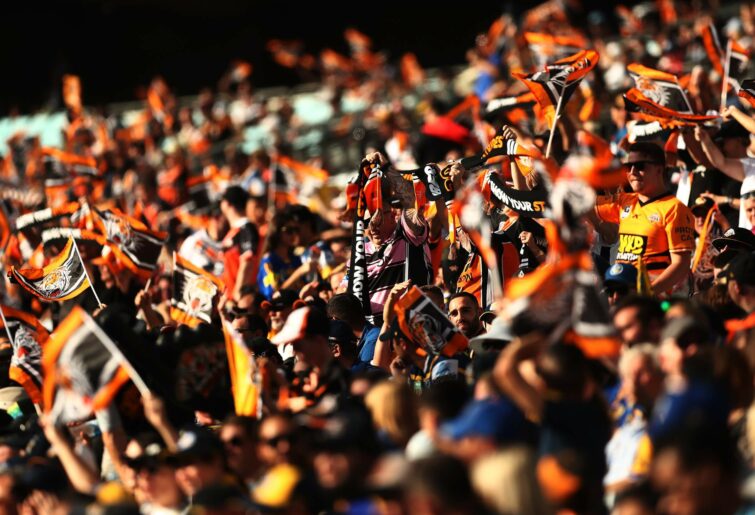 Caine debuted for St George in 1998, moved to Balmain in 1999 and found himself in the No. 1 jersey for the inaugural Wests Tigers game. He certainly made the most of it, scoring three tries and kicking four goals that day. He finished with the most tries, points and games for the club that season. He left for the UK in 2003.

After debuting with the Hunter Mariners in the Super League competition in 1997, Carlaw was part of the Storm’s inaugural side a year later and then joined Balmain in 1999, staying on for the joint venture. He left for the Warriors in 2002.

Few players possessed the natural talent that Craigie had, and one wonders where he would have gone in the game with the right attitude and mentorship. He joined the Tigers from the Knights in 2000, had two disappointing seasons and then moved on to South Sydney.

Hill had ten years in the top grade, a premiership in 1996, 13 State of Origin appearances for New South Wales and nine Tests for Australia when he joined the joint venture from Manly in 2000. He had four injury-interrupted seasons with the Tigers before retiring at the end of 2003 only to make a brief comeback with Manly in 2005.

Hopoate joined the Tigers from Manly in 2000 but spent most of his time either before the judiciary or suspended. His Tigers career came to an abrupt end in 2001 when the club showed him the exit door following some on-field amateur proctology. He turned out for the Northern Eagles later that year. Some clubs just don’t have any standards, I guess.

Better known as a centre, McGuinness found himself wearing the No. 6 jersey in the inaugural Tigers game. He debuted for Western Suburbs as a 19-year-old in 1995 and spent three years with the joint venture before shifting to Manly in 2003. In the 2001 season he, along with halves partner Craig Field, returned a positive drug test and was suspended for six months.

Field was a Souths junior and debuted for the club as a 17-year-old in 1990. He found his way to the Tigers after stints with Souths, Manly and Balmain and was effectively punted by the club early in the 2001 season after being suspended by the NRL for a positive drugs test. He was, as they say, a very colourful character.

Lowrie brought a lot of experience to the Tigers and had 129 first-grade games and 15 Tests for New Zealand under his belt when he joined the merger from Balmain. He left the club at the end of the 2001 season.

Senter was a versatile player who was equally at home as hooker as he was in the back row. He joined the merger from Balmain after originally making the first grade with Canterbury, and he captained the Tigers for most of his time there after taking over from Jarrod McCracken. He retired at the end of the 2004 season.

Walker had over 100 games under his belt in a ten-year career when he came to the Tigers as a 29-year-old, most notably with Balmain. He moved to the Storm in 2002 for his final season in first grade.

McCracken was a star signing for the Tigers and had played over 170 first-grade games and 22 Tests for the Kiwis when he joined to captain the club. Unfortunately his career came to an abrupt end in the Round 15 clash with Melbourne when he suffered serious neck injuries as the result of a spear tackle.

Hailing from Temora, Stimson joined Balmain in 1996 and stayed on following the merger. He retired at the end of 2000.

Tyran Smith seemed to have wanderlust, and had played with five clubs before playing in the inaugural Tigers match. He found a home at the Tigers for a couple of years and was their player of the year in their first season. He played eight Tests for New Zealand in his career and moved on to the Canberra Raiders in 2002.

Primarily a hooker, Nable came to the merger from Balmain and left the Tigers for North Queensland at the end of 2000.

Georgallis was a handy utility player and had 11 years in the top grade with both Easts and Wests when he signed on for the joint venture at the age of 31. He had just one season with the Tigers before finishing his playing career in England.

A Tigers stalwart, the powerful back rower joined the joint venture after a 102-game career for Balmain and was one of only two players from the inaugural side to win a premiership with the Tigers, along with John Skandalis. He wasn’t offered a Tigers contract for 2006 and finished his career in England.

The big front rower became a Tigers legend after joining the club from Western Suburbs, where he made his first-grade debut as a 19-year-old in 1996. He had seven years with the club, moved to England for a couple of years in 2007 and then made an unexpected comeback with the Tigers for two more seasons in 2009. He scored the first try for the Wests Tigers in their inaugural game.

A talented outside back, McGuiness debuted for Western Suburbs as a 19-year-old in 1994 and played four Origins for New South Wales across the 1997 and 1998 seasons. He never recaptured his best form with the Tigers, and he left the club at the end of 2000.

Pearce was and is a Balmain living legend, but he was a surprise choice of coach for the joint venture club in 2000 given that he had spent the last six years coaching Balmain into oblivion. He resigned as coach after just one season.

The Wests Tigers used 34 players in first grade that year, and some of the better known players from 2000 who were not in that inaugural team included the following names.

Mescia was a tough little competitor and a very handy hooker who spent six seasons with Western Suburbs before joining the joint venture. He retired before the 2002 season got underway due to a serious back injury.

After just three first-grade games with Balmain in 1999 the tough back rower joined the Wests Tigers but played only one game of the 2003 season after receiving an 11-week suspension for foul play. He headed north to the Cowboys in 2004.

Primarily a speedy fullback, Seers spent seven years with the North Sydney Bears and had played four Origins for NSW by the time he came to the Tigers. It didn’t take him long to establish himself as the No. 1 fullback in the club before finding his way into the centres in 2002. He left the Tigers for the ESL in 2003.

The Wests Tigers got off to a pretty good start in their debut season, losing just two of their first ten games, and they were sitting in second place at the end of Round 16, but then the wheels fell off and they won only two of the last ten to finish just two points out of the top eight.

The following season saw them struggle, mainly due to the scandals involving Craig Field, Kevin McGuinness and John Hopoate, but they didn’t have to wait too long for premiership success.