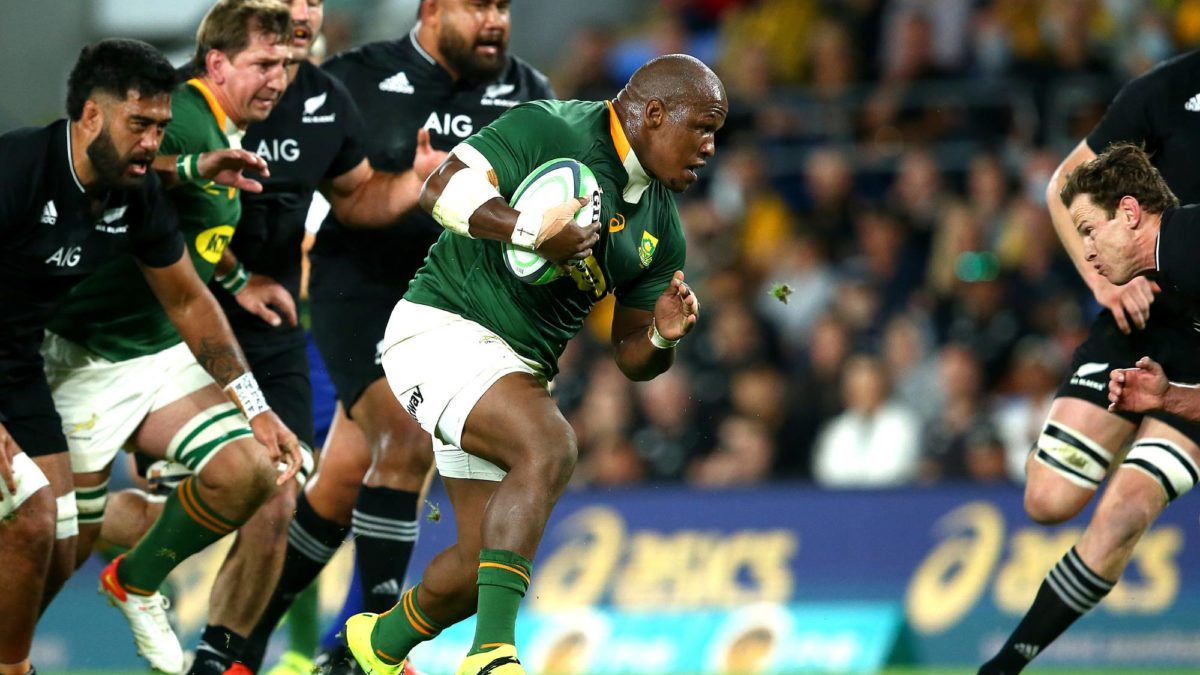 The Springboks rebounded from a crescendo of criticism over their three straight defeats to inflict the All Blacks’ first loss in The Rugby Championship and stamp their authority as world champions.

South Africa finally head home after a challenging “lifetime in a bio-bubble’ in Australia to close out the tournament impressively after an Elton Jantjies penalty kick in the final minute crowned an epic 31-29 win on the Gold Coast.

It was redemption for Jacques Nienaber’s Boks after being castigated and written off by the rugby world a week earlier as the instigators of anti-rugby and killing the game.

“Never mind the three defeats they took in the Rugby Championship prior to this game. Never mind the setbacks. With this one performance, the Springboks stamped down their authority as world champions,” trumpeted the IOL’s Wynona Louw.

“They stuck to their traditional strengths, with their pack putting in a big performance, their lineout, despite a couple of issues, worked a treat overall and their maul was a beautiful sight. Their kicking game was good.

“And one of the most pleasing stats to see was the metres and carries made department, where the Boks clocked 378 metres compared to the Kiwis’ 312 and 86 carries to their 82. Not only that, but the tackle stats were also telling – 120 compared to the South Africans’ 109.”

Brenden Nel, writing in Super Sport, highlighted the resilience of the Springboks to fight back after all their adversity on tour.

After the dust has settled, my view is not that refs are bad. The laws are the problem. They’re too complex and there are too many grey areas.
Watched 3 games this weekend, 3 different breakdown interpretations. If there is no consistency, there will always be frustration.

“Elton Jantjies produced the sweetest sound since the start of the pandemic for South African fans as his boot kissed the rugby ball, drilling home an 82nd-minute penalty to give his side a famous, epic victory over the All Blacks,” Nel extolled.

“The Boks have been through 18 weeks of living in a bio-bubble which included a Covid outbreak, a Lions [series] and a strict 14-day Australian quarantine.

“After losing to Australia and New Zealand by 78th-minute penalties and a poor performance in Brisbane, and being castigated and written off by the rugby world as anti-rugby and killing the game, the players in the Green and Gold stood up and stood tall.

“The immense, never-say-die spirit that took this side to a World Cup and a Lions series victory re-emerged in the most trying of times, against the odds and carried them home.”

The IOL’s Mike Greenaway was typing his agreement: “There was heartbreak no more for the Springboks when they scrapped their way to an epic victory over the All Blacks to end a three-match losing streak and to reinforce the fact that they are very much a champion side.

“The Boks return home to South Africa now with their heads held high and with so many critics the world over silenced for the unrelenting criticism that the Boks are a boring side.

“Well, not even the most crazed adrenalin junkie could have found anything remotely dull about this cliff-hanger.”

Gavin Rich, in Super Sport, said it was a decided change in strategy and tactics by coach Nienaber, more ball in hand, that was the springboard for the Springboks’ morale-boosting victory.

“The Boks have been the target of ongoing, carping criticism ever since they beat the British and Irish Lions in the iconic series that was completed seven weeks ago, with many labelling them boring and saying they were anti-rugby because of the way they relied so heavily on contestable kicking,” Rich said.

“However, in the match at CBUS Stadium, like in the Rugby World Cup final against England in the World Cup final nearly two years ago, the Boks appeared to change their strategy by attacking more with ball in hand.

“While they still kicked 28 times, they had more running metres in the game than the All Blacks, which doesn’t happen often against the Kiwis.”

Springboks warrior No.8 Duane Vermeulen gave an insight into the pressures within the camp of the weeks in lockdown in Queensland culminating a mentally challenging time for members of the touring party.

“You have the public and the media that have their opinion on what we do on tour and the things we go through, but if you are not here you don’t really understand what we are going through,” he said. “It’s difficult. People say it is your job and whatever, and we don’t listen to the public’s opinion, but it’s not as easy as people think,” said Vermeulen, the 2019 World Cup final player of the match for the Springboks.

“You are away from home, away from your families, you don’t see your kids. There are a lot of guys that have children and you don’t spend time with them and that is vital to your mental state and where you are as a person and as a player. It’s a difficult thing being away from home and we had our challenges with the team.

“You have got to keep on adjusting to what is thrown at us and sometimes it is difficult and we miss it a bit. But at the end, we got it all together and walk away with a win at the end of our tour.”

New Zealand rugby pundits saluted the Springboks on their bravura performance and intestinal fortitude.
“Good on ya, Springboks,” toasted Marc Hinton in stuff.co.nz.

“The All Blacks may have won the Rugby Championship, but the gritty, competitive, feisty South Africans won the final battle to deliver a resounding message on a number of fronts with a victory that will live long in the memory.

“Yes, they play their style of rugby, based very much on defensive pressure and the kick and chase game, but they do it so very, very well that there has to be a place for it in modern rugby.

“There just has to be. You don’t get Test matches like this one, so competitive, so close, and so enthralling, without having a couple of teams who are very good at what they do. And they don’t have to be very good at the same things.”

The New Zealand Herald’s Gregor Paul surmised: “If the All Blacks are honest, they will know they didn’t deserve to make another late escape against the Springboks.

“They were hanging on for most of the second half – being beaten up at the tackle, the scrum, the lineout and they looked punch drunk and incapable of escaping.

“But South Africa, who were quite brilliant for 80 minutes, were able to use their incredible pack of forwards to dig the win out in the last minute with a superb driving maul.”

Fair play to the Boks. Superb test. Deserved victory. And they played much more rugby. Long may it last.

All Blacks coach Ian Foster said the Springboks flustered his team in the second half dog-fight.

“We are bitterly disappointed,” Foster said. “It’s frustrating when you’ve got control of it but it was a massive arm-wrestle. The South Africans played superbly.

“They came with a lot of attitude; they carried hard, they moved us around and challenged us in many ways. They had a really strong third quarter and got us a bit flustered.”