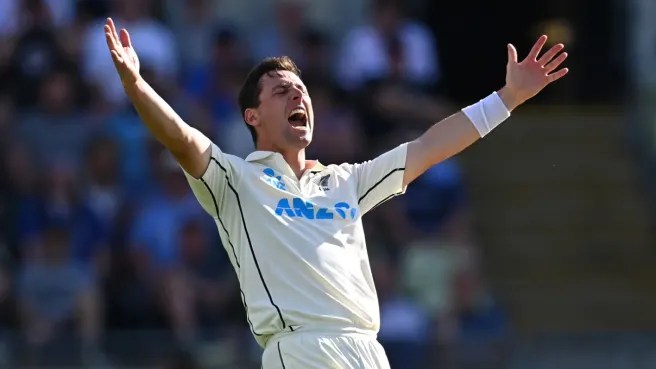 Henry came in as a replacement for Boult, but he put on a stunning display of bowling with 7/23.

He was relentless with his lines, made the batters play, move the ball both ways with swing and seam movement.

Bowled quite a few unplayable balls and eventually recorded New Zealand’s third best Test figures ever in an innings.

At Lunch Break – South Africa were 44/4. But right after lunch, Tim Southee sent Temba Bavuma also back to pavilion for just 7 and visitors score reading at 52/5.

South Africa is playing the test with seven specialist batters.

South Africa 1st Innings – SA All Out for 95

NZ vs SA LIVE Score: South Africa opted for seven specialist batters and reinstalled Zubayr Hamza, who last played a Test two years ago against England and was selected after Petersen was ruled out, at No.6. That left them without an allrounder or a specialist spinner, with neither team choosing to field a slower bowler on a greentop.

Taylor retired last month and Williamson is injured, leaving the Black Caps without the pair’s steadying influence against a dynamic Proteas pace attack.

South Africa arrived on a high after completing a double of Test and one-day series wins at home against India. New Zealand coach Gary Stead admitted his team face a tough challenge in the two-Test series. “They’re obviously a quality side, capable of beating India in South Africa,” he said. “They’ve got classy players throughout and while they lack some experience you certainly can’t underestimate them.

New Zealand are also without pace spearhead Trent Boult, who is awaiting the birth of a child, with Matt Henry coming in as a replacement. Batsman Devon Conway and fast bowler Neil Wagner were both born and raised in South Africa and Stead said they would relish playing the Proteas.

“From our perspective they’re true-blue Kiwis now, even though they might have slight accents at times,” he said. “They’re working hard for the ‘Silver Fern’ but I guess playing against South Africa will be exciting for them as well.” The inaugural World Test champions begin the series as favourites, lying second in the ICC Test rankings, with South Africa fifth.

But they have never won a Test series against South Africa and have recorded only one home victory over the Proteas in 20 attempts. Former Black Caps skipper Brendon McCullum said South Africa under captain Dean Elgar were “tough, gritty, they don’t give
you an inch”.

“I think this will be a ripper series, I’m predicting it could be 1-1 but I actually have South Africa going in as slight favourites,” he said.

“That’s pretty hard considering how good New Zealand have been in the last little while.”
Elgar was wary of New Zealand’s threat on a quick wicket at Christchurch’s Hagley Oval but said the India series showed South Africa could cope with pace.

“With respect, New Zealand’s attack are a little bit down on pace compared to the Indian attack,” he said.

In saying that, they execute their skills perfectly in their conditions.