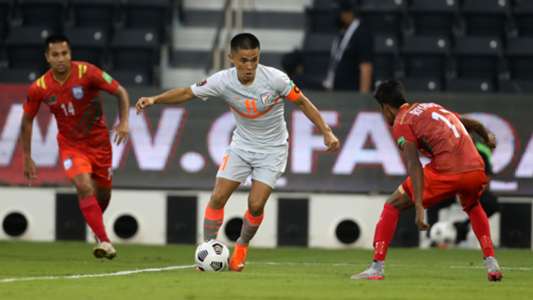 Bangladesh have got off to a positive start in the SAFF Championship 2021 after they edged Sri Lanka 1-0 in the tournament opener at the National Football Stadium in Male, Maldives on Friday evening. They will next go up against India on Monday.

In their previous encounter with the Blue Tigers, they were defeated 2-0 courtesy of a brace from Sunil Chhetri. So this time they will have a  point to prove against Igor Stimac’s men. But do they have enough firepower? We tried to find out which team have players with better height and in this aspect, India clearly have an advantage over their neighbours.

Oscar Bruzon’s first-choice keeper, Anisur Rahman Zico (175 cm), might be known for his reflexes and agility but he is leagues behind India’s Gurpreet Singh Sandhu (198 cm) as far as their height and reach are concerned. Similarly in defence, If Stimac chooses to field a three-man backline with Pritam Kotal/Rahul Bheke, Chinglensana Singh and Subhasish Bose, India can dominate aerially against Bangladesh’s forwards Suman Reza and Biplo Ahmed who are just 165 cm and 167 cm respectively.

However in midfield, the Bangla Tigers might have a slight advantage as they have the likes of Atiqur Rahman (177 cm), Rakib Hossain (175 cm), and Jamal Bhuyan (173 cm) who are taller than their Indian counterparts of Anirudh Thapa (169 cm), Brandon Fernandes (167 cm), and Suresh Singh (170 cm). But if Glan Martins (183 cm) is given a start then the Goan can be a towering presence in the centre of the park.

In attack, the scales once again tilt towards India. Although Sunil Chhetri (170cm) is not one of the taller players on the pitch, his aerial abilities are well documented. Whereas Manvir Singh (188 cm) is taller than any of the other Bangladeshi defenders. Even if Rahim Ali (179 cm) takes the field on the left wing, he will be a handful for right-back Bishwanath Ghosh who stands at 165 cm.

So it will not be surprising if India dominates the aerial duels on the field as they have taller players on the roster and the average squad height is significantly better than the opposition. Have a look at the height of each player of the respective squads in the tables below.