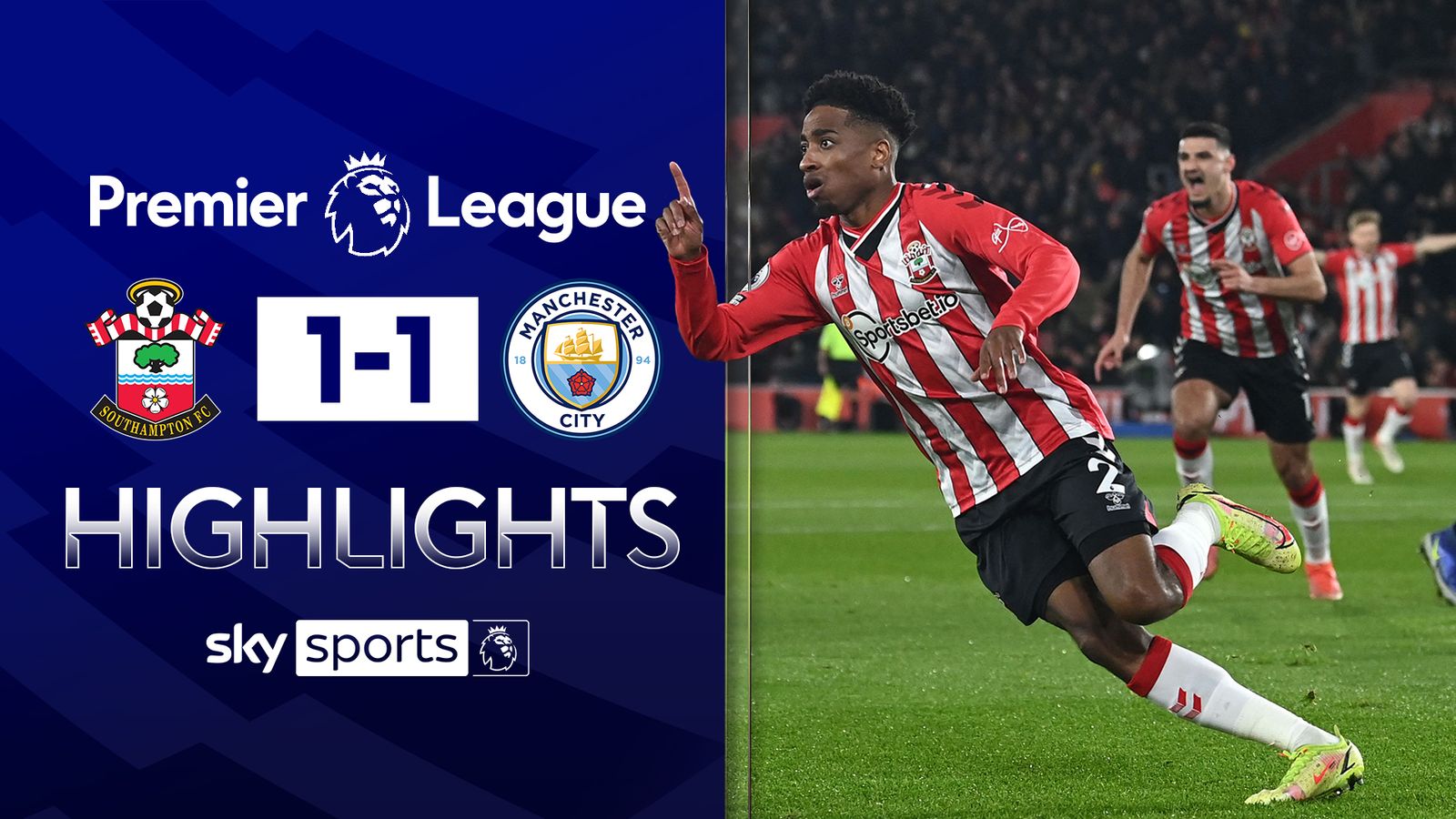 Southampton ended Manchester City’s winning run of 12 Premier League games after battling away to a 1-1 draw with the league leaders.

Kyle Walker-Peters sensationally put the Saints in front after a fine team move and finish but Aymeric Laporte headed Pep Guardiola’s side level in the second half. City struck the woodwork twice late on but could not find a winner.

City are now 12 points clear of Liverpool at the top but Jurgen Klopp’s team do have two games in hand.

The opening goal from Southampton was one Pep Guardiola would have been proud of had his side scored it. A switch of play saw Walker-Peters join the attack and his one-two with Nathan Redmond confused the City defence and allowed him the space to fire home a tasty half volley into the far corner. Not a bad way to score your first Premier League goal.

City’s first-half performance was described as “shocking” by Sky Sports pundit Graeme Souness as they took 27 minutes to register their first shot on goal and even that was a speculative effort from Joao Cancelo that flew into the stands.

The visitors were probing but without much penetration. However, Raheem Sterling really should have finished a cross from six yards out but was denied by the giant frame of Fraser Forster.

Man of the match: Kyle Walker-Peters

A second-half onslaught towards the Southampton goal was expected but it was the home side that should have extended their lead. Ederson was quick to react to a Jan Bednarek header from close range before Armando Broja headed against the post following another dangerous James Ward-Prowse corner. Bednarek also had a chance from the rebound but blazed over to spare City.

Missing chances like that will always come to haunt you against City, who drew level on 65 minutes. A Kevin De Bruyne set-piece was drifted towards the back post and three City players were waiting to head home. It was left to Laporte to bullet the cross home meaning Saints have conceded 11 headed goals this season – no team have shipped more.

The goal lifted City to the levels we expect of them. De Bruyne – now running the show – bent a sumptuous effort off the frame of the goal before substitute Gabriel Jesus managed to hit the same post moments later after attacking a back-post cross.

City wanted a penalty on 78 minutes when De Bruyne was sandwiched on the edge of the box by Mohammed Salisu and Oriel Romeu but a VAR decided to stick with the on-field penalty call. It was a busy few minutes at Stockley Park as Stuart Armstong survived a VAR review for a high lunge on Laporte that was only deemed worthy of a yellow card.

A City winner looked nailed-on but credit to Ralph Hasenhuttl’s team, they regained organisation and held on valiantly for their point.

‘City got away with one’

“I think they [City] got away with one today. They were not at their best.

“They were a yard short in the way they ping the ball around. The top players, they fire the ball at each other and they’re trusting the guy they’re serving the ball to control it.

“But tonight I thought it was passive passing, and if it’s slow passing it allows the Southampton player to get to the ball and close it down.

“I thought at half-time they would’ve got a roasting from the manager and come out a very different team. I think they tried to up their game, but the game had been set in its way.

“I’ve been in that situation, when you appear to be coasting to a league championship and you get a game like that where you didn’t lose and you got away with it.

“That’s a golden opportunity for management and staff to get after them tomorrow or Monday morning and point out to them that we have won nothing yet.”

Southampton are a team going places with a manager that is proving he is a dab hand at significantly improving players without the need to spend big money.

Just look at their two outstanding performers in this impressive draw. Walker-Peters, a £12m purchase from Tottenham, scored a goal that Guardiola would have been proud of if his team had scored it while Salisu, a £10.9m investment from Real Valladolid, put in his best performance in a Southampton shirt to repel City’s array of attacking stars. He is getting better and better under the watch of Hasenhuttl.

Hasenhuttl’s style of football, which demands non-stop pressing, creativity from out wide, and a team focused on turning oppositions with quick counter-attacking football, caused City problems in transitions. The direct running of Armando Broja meant Aymeric Laporte and Ruben Dias could never switch off.

When his team are hot, Southampton are hot. However, inconsistency has hindered progress, to the extent he was nearly dismissed after an embarrassing 9-0 thrashing by Leicester in October.

The remarkable turnaround has won Hasenhuttl and the club plenty of admirers. That the Southampton hierarchy stood by their man and he rewarded that faith, suggests an impressive structure within the club is in place. To avoid defeat in two matches this season against the team running away with this Premier League title is a remarkable achievement. Hasenhuttl is an elite manager. He deserves more respect for the job he is undertaking.

The number of times you type the name of a player out when live blogging a game tends to be a clue about how involved they were in the action. The words ‘Jack Grealish’ didn’t have to be typed out too many times in Manchester City’s draw with Southampton. It was another performance where the England star was on the edges of the game rather than at the heart of it. He only had 56 touches of the ball against Saints. Phil Foden had 90, Kevin de Bruyne had 95. Hey, even Ederson had 31.

It points to perhaps a lack of confidence in a player that has built a career on going searching for the ball even in the most testing of times. Pep Guardiola doesn’t seem worried, though. He had the chance to hook Grealish at any point during this underwhelming showing but decided to switch Raheem Sterling for Gabriel Jesus in his bid to change the momentum of the game. In typical Pep style, it worked the oracle as City enjoyed their best spell of the match with the introduction of the Brazilian. Not that Grealish played too much of a part in the fightback.

In 17 Premier League games this season, Grealish has just two goals and two assists to his name. His last goal involvement came during the 7-0 drubbing of Leeds in December.

In a numbers focused industry that a debatable return for a player that cost Manchester City £100million in the summer.

What the managers said
Pep Guardiola said: “We played really well. Unfortunately, in the first half we conceded a goal, but I think this was one of our best performances of the season, by far.

“They were incredibly organised and this is one of the best performances we played against them. Yes, the result was not good, but in terms of performance and the way we played, it was excellent.

“We played better than in the Arsenal game, when we won, and today we drew. Sometimes you deserve it and you don’t win, but the way we played here was excellent.

“Why should we lose belief in what we have done? It was a good performance. We are going to drop points, but the way we behave is very good.

“We have two weeks to prepare for the next game. People will say the Premier League race is not over and that is good for this side. We have many tough games ahead of us, but we will try to behave until the end.

“I would like to have a 40-point lead ahead of Liverpool, but that is not possible in January. I didn’t expect to have this lead, but now we will rest and come back as best as possible.”

What’s next?
Southampton host Coventry in the FA Cup fourth round on Saturday February 5 at 3pm while Manchester City take on Fulham at the Etihad in the same competition at the same time.