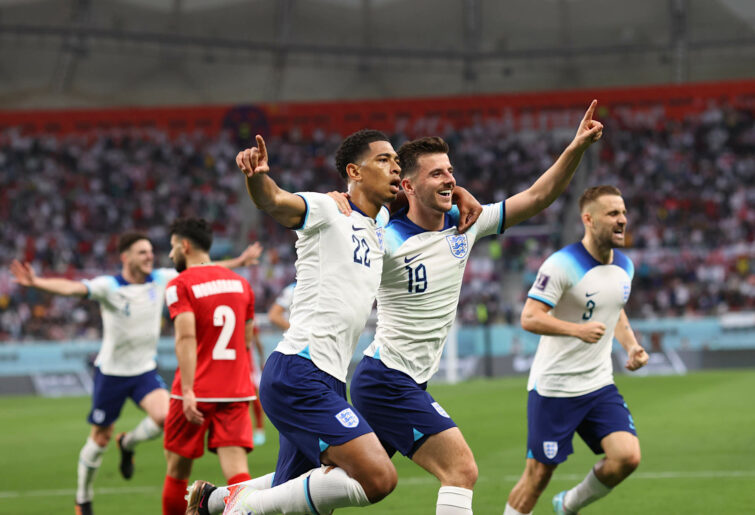 Bukayo Saka had a brace and Jude Bellingham hit his first England goal, with strikes from Raheem Sterling, Jack Grealish and Marcus Rashford rounding out the scoring.

Bellingham got the nod ahead of the likes of Jordan Henderson and Kalvin Phillips in the engine room and it looked like a masterstroke after the Borussia Dortmund man netted the opener.

Trent Alexander-Arnold, who’s had an uncharacteristically mixed start to the Premier League season, had to settle for a bench spot as Gareth Southgate preferred the in-form Kieran Trippier at right-back.

The Three Lions threatened early and controlled possession from the outset. The midfield trio of Declan Rice, Bellingham and Mason Mount dictated the tempo and looked to get their forwards involved.

There was a lengthy delay after Iranian goalkeeper Alireza Beiranvand collided with a teammate. There were concerns for the shot-stopper and it initially appeared he would be taken off, but played resumed with him between the sticks. However, just a minute later Beiranvand signalled to the bench that he needed to leave the field.

When England did manage to penetrate the Iran backline it was Mason Mount with an effort from an acute angle that never looked like going in.

The diminutive Raheem Sterling, struggling for form after his off-season move to Chelsea, looked to get things going without much success.

Harry Maguire then went close, the crossbar reverberating from the centre-back’s header off a set-piece.

In the 35th minute it was 19-year-old Bellingham with the opening goal, and his first for his country, meeting Luke Shaw’s excellent cross with a powerful header from six yards out to settle some English nerves.

Off a set-piece, Bukayo Saka doubled his side’s advantage with a thunderous volley after Maguire had done well to cushion his header into the Arsenal winger’s path.

Just minutes later it was Raheem Sterling’s turn to get in on the fun, turning in Harry Kane’s cross as the Three Lions executed a perfect counter-attack.

The clock struck 45 minutes but, owing to the earlier delay, Iran still had to try and stem the bleeding for 14 more minutes.

In an effort to switch things up Iran manager Carlos Queiroz made a triple change at half-time, injecting Saeed Ezatolahi, Hossein Kanaanizadegan and Ali Gholizadeh into the contest.

England continued to dominate proceedings, however, and it wasn’t long before Saka doubled his tally to push the scoreline out to 4-0.

Just three minutes later, Jordan Pickford’s hopes of a clean sheet were dashed by Mehdi Taremi, the Iranian’s strike going in off the crossbar and cutting the lead to three.

Saka, whose two goals had certainly earned him an early shower, was withdrawn 20 minutes from time for Marcus Rashford as part of a quadruple change from Southgate.

Also taken off was Maguire, who went straight down the tunnel for further inspection by England’s medical team.

Rashford immediately made an impact, restoring England’s four-goal lead with a calm finish after he was fed by Kane, the Spurs man notching another assist.

In the final minute of regular time, Callum Wilson could have gone on his own by instead laid on an unselfish assist to Jack Grealish, putting the cherry on top of the icing on the cake.

With the last kick of the game, Taremi beat Pickford from the penalty spot to double his tally and restore a bit of pride for the Iranians.

After a somewhat nervy beginning, in the end the 6-2 result didn’t flatter England. It gives them a healthy boost to their goal difference, which could potentially be valuable come match day 3.

The Three Lions next take on the United States on Saturday morning (AEDT). Iran will face Gareth Bale’s Wales side on Friday evening, likely needing at least a point to keep their 2022 World Cup flame flickering.