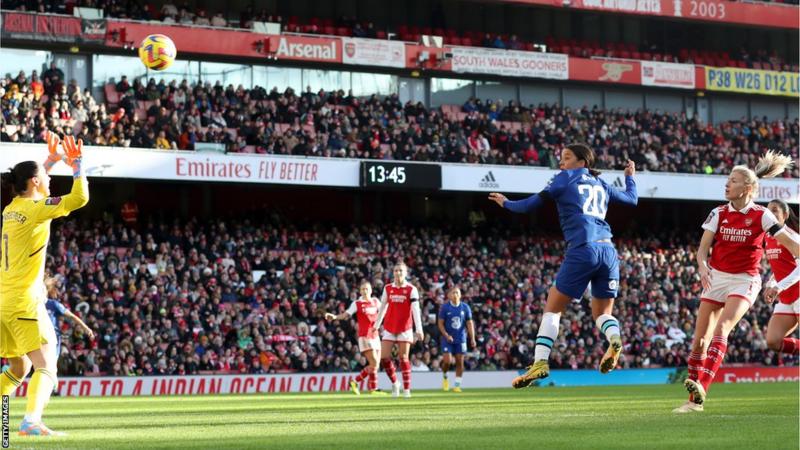 But Kerr headed an equaliser to ensure Chelsea remain unbeaten since the opening day of the season.

They are three points clear of Arsenal, who have a game in hand.

The crowd of 46,811 was the second biggest in WSL history.

Chelsea were below par – their first shot on target came in the 76th minute through centre-back Magda Eriksson – but winning when not at their best is often a mark of champions.

Manager Emma Hayes said: “Of course I’m going to be happy with a point. It was a cagey game. My team showed tremendous character, to get a point when not at our best.

“The quality of chances was woeful – our attacking players didn’t create a lot. But to stay switched on is such an attribute.”

Ultimately, the red majority of the crowd – just shy of the WSL record 47,367 who attended Arsenal’s 4-0 win over Tottenham in September – were sent home wondering what might have been.

“You have to keep two thoughts – be happy with the performance but be disappointed in the result,” Arsenal manager Jonas Eidevall said.

“It is more important to get the performance right in the long term. We need to draw strength from this.”

Kerr saves below-par Chelsea
This was Arsenal’s first WSL game since Vivianne Miedema was ruled out for 2022-23 with knee ligament damage, while Beth Mead suffered her season-ending ACL injury the last time the Gunners played at the Emirates.

For long periods Arsenal looked like they missed the star pairing, creating plenty of chances with no cutting edge – until Charles clumsily felled Foord just inside the penalty area.

The foul began outside the area, but the spot-kick was given by referee Emily Heaslip as the final contact was inside.

“The ref gave it for tangling legs in the box, which is unavoidable,” Hayes said. “VAR needs to be in the game to confirm or deny that.”

Little has had injury woes of her own this campaign, but the midfielder was nerveless in sending Zecira Musovic the wrong way with her spot-kick.

Arsenal came close to a second when Steph Catley’s attempted cross almost caught out Musovic, who scrambled to tip the ball on to the bar.

Also back for Arsenal following injury is Leah Williamson, the England centre-back leading the home defence in quelling the Chelsea attack – until the 89th minute.

It was the 32nd goal Chelsea have scored in 11 WSL games, and few have been as wildly celebrated by the bench, Hayes leaping to her feet and punching the air.

She said of Kerr: “No-one in the world can score the number of goals she has. The standout attribute is that she doesn’t lose focus at any point.

“She knows it takes one chance, and the ball from Jelena was world-class. So was the header.”

Arsenal drop points against title rivals – again
A midday kick-off, it was a bright and early start for both teams on Sunday – and Arsenal were out of bed straight away and pressing Chelsea high up the pitch.

Erin Cuthbert and Millie Bright were guilty of giving the ball away around their own box, and Arsenal created the bulk of the first-half chances. Frida Maanum and Foord shot straight at Musovic, while Lina Hurtig found the side-netting.

However, Arsenal never truly tested Musovic in the first half, while the Blues struggled to create anything early on, save for livewire Lauren James making a 40-yard run and zipping a shot just wide of the far post.

Last season only a point separated these sides, while both clubs had lost only one match this campaign. Such tight margins led to a tight game.

Arsenal have dropped points against Chelsea and Manchester United – their two main title rivals – from winning positions at home.

There were worrying scenes of crowding outside the stadium and many supporters only reached their seats well after kick-off following huge queues.

An Arsenal statement read: “An early kick-off, combined with a number of new supporters to our stadium, coupled with 50% of supporters arriving in the last 20 minutes before kick-off, resulted in busy turnstile areas.”