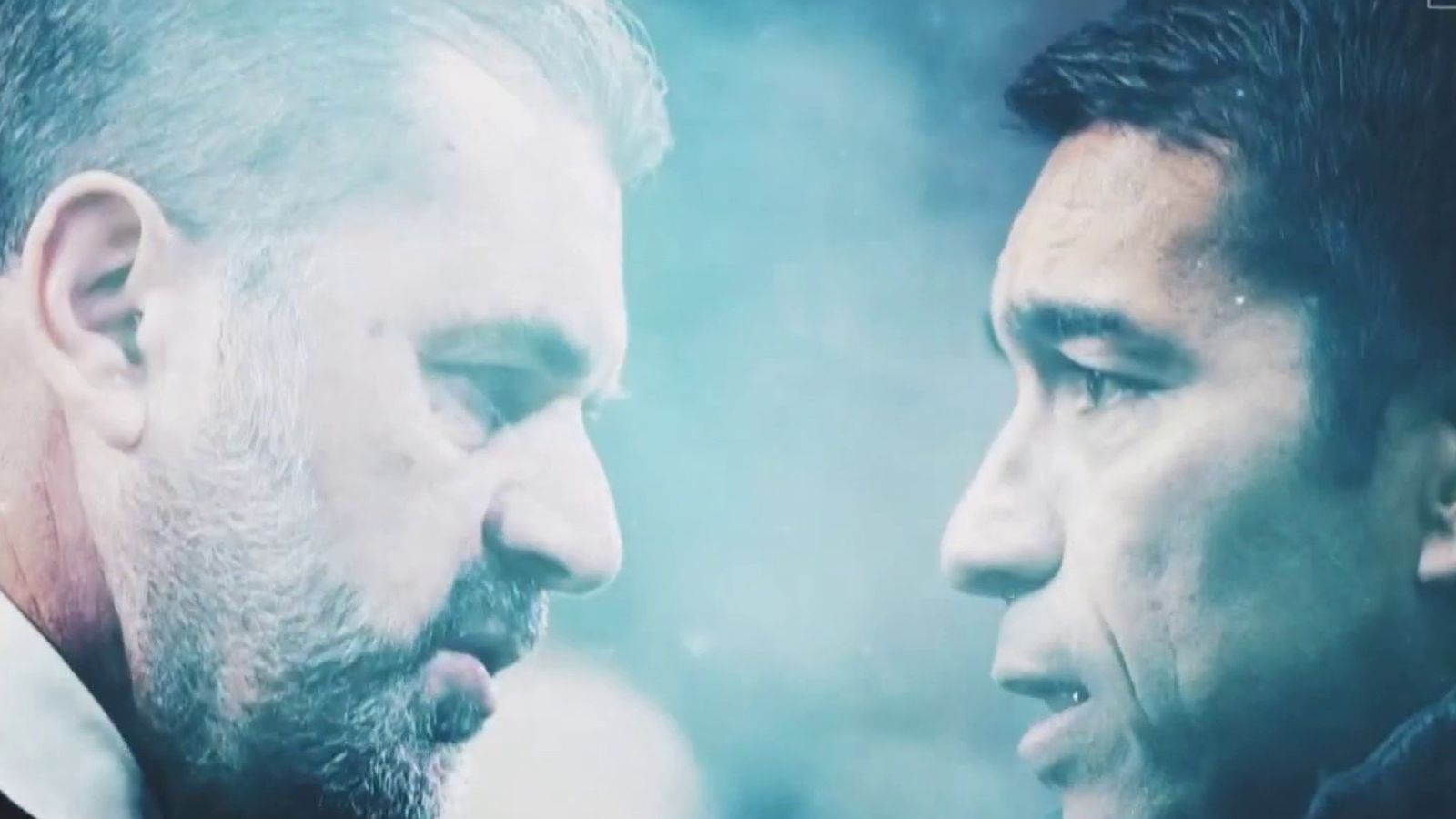 With just three points separating Celtic and Rangers in the Scottish Premiership title race, who will come out on top this season?

Sunday’s Old Firm clash at Ibrox could go a long way to deciding where the trophy will end up, with just seven matches to go.

The pride of being crowned champions will be more than enough for supporters, but this season’s Premiership title comes with an even bigger prize – a guaranteed place in the Champions League, and with that comes a cash injection of £30m and rising.

There’s little, if any, margin for error over the coming weeks for both clubs so strap yourself in for a battle that could go down to the final match of the season – a scenario both sets of fans have experienced over the past 25 years…

Coming into the 1997/98 season, Celtic’s task was crystal clear, stop Rangers from winning a 10th consecutive league title and surpassing the record of nine that both clubs had achieved.

There were several similarities from then to now. There was a new manager in the Parkhead dugout, new captain after Paul McStay left and a new striker up front – Henrik Larsson. And just like this season, it was a campaign that started with defeat.

However, it wasn’t just the Old Firm in the mix as Jim Jeffries’ Hearts went toe to toe with Celtic and Rangers – and for spells of the season, led the way.

With little to separate the leaders, Rangers won the opening clash of the season against Celtic before taking a point at Parkhead – a draw that seemed to give Jansen’s side confidence.

Celtic would go on to lose just two more matches that season and celebrated a first Old Firm win in 11 meetings at New Year – a significant shift in momentum.

When Hearts’ impressive challenge faded – it was a shootout between Glasgow’s big two for top spot, a position Celtic held.

However, five league games remained and another clash at Ibrox was on the cards. Victory or even a draw would have kept Jansen’s side top but Rangers came away with the points to move ahead on goal difference.

In a title race that ebbed and flowed, both clubs dropped points in the run-in but when Rangers lost to Kilmarnock on the penultimate weekend it handed Celtic the chance to win the league at Dunfermline. However, a 1-1 draw at East End Park gave Rangers hope as we went into the final day of the season.

A dramatic finale saw Rangers win 2-1 away to Dundee United to keep the pressure on Celtic. Meanwhile, at Parkhead, an early Larsson goal put the home side ahead but they struggled to find a second.

George O’Boyle missed a golden chance for Saints that could have altered the destiny of the title before Norwegian striker Harald Brattbakk scored to secure a first championship for Celtic in 10 years.

Rangers’ dominance was over, on the final day of the season.

If you thought winning the title by two points was dramatic – imagine if it was decided on goal difference.

It’s an experience Manchester City and Manchester United fans will have different accounts of, following that afternoon in 2012. However, many years before that the Old Firm served up an even more dramatic title tussle of their own.

Alex McLeish’s Rangers side drew 3-3 against Martin O’Neill’s Celtic in the opening Old Firm at Parkhead before Rangers went on to seal victory at Ibrox months later.

It was a sign of things to come as Glasgow’s big two tussled for top spot – never more than a few points separating the clubs.

Celtic would have taken a huge lift in their quest for the title when they won home and away in the Old Firm games that followed but alongside their domestic endeavours was a remarkable run in the Uefa Cup.

O’Neill’s side went on to reach the final in Seville – but with that saw fixtures pile up towards the end of the season.

Celtic and Rangers went into the final day separated by just goal difference, so the pressure was on to not just win, but win big.

Rangers were at home to Dunfermline, while Celtic were at Rugby Park to face Kilmarnock. The stage was set.

Celtic took an early lead and were 2-0 up before the break but Rangers were 3-0 to the good at Ibrox.

As fans, with radios glued to their ears, kept abreast of how their rivals were doing – Celtic went on to win 4-0, despite missing a penalty, and it looked as if the title could be heading to Parkhead.

That was until news filtered through of a late penalty at Ibrox. Mikel Arteta’s injury-time spot-kick clinched the title by the narrowest of margins as Rangers won the title by a single goal.

If that wasn’t dramatic enough, just a couple of years later the title was decided in the final minute and a helicopter – with the trophy on board – had to change course and head from one spot in Scotland to another.

Celtic had regained the title after heartbreak in 2003, but more pain was around the corner in O’Neill’s final season in charge.

It was seven in a row for the Parkhead club as they beat Rangers again in the first clash of the season but McLeish’s men responded with back-to-back victories to close the gap on their rivals.

Craig Bellamy fired Celtic to victory at Ibrox in April and left the Hoops odds on favourites to win the title. Heading into the final day they were two points ahead of Rangers at the top of the table with a game away to Motherwell.

The Fir Park side had nothing to play for in mid-table and Rangers faced what looked to be the much tougher task of a trip to Hibernian.

Celtic looked to be destined for the title when Chris Sutton put them in front after 29 minutes.

Even when Nacho Novo gave Rangers the lead at Easter Road it looked like it was too little, too late for the Ibrox side.

But it was Scott McDonald who broke Celtic’s hearts.

The man, who would later become one of the Hoops’ top scorers, struck twice for Motherwell in a remarkable final three minutes to secure a shock win for the home side.

Rangers held on at Hibs, the helicopter changed direction, the trophy was theirs and the day was dubbed ‘helicopter Sunday’.

The Hoops were hoping to win a third consecutive title but that quest started with a 3-0 defeat at Ibrox in the first derby of the season.

Rangers’ European schedule resulted in the return fixture being delayed and when the sides met for a second time, at Ibrox, Smith’s side won 1-0.

A seven-point gap appeared at one stage as Rangers threatened to pull away from their rivals, but when the clubs met twice in April – Celtic clawed their way back into the race.

A 2-1 victory was followed by a 3-2 win as the title race took another twist, and similar to 2003, European football would create an issue – but this time for Rangers.

The Ibrox club’s run to the Uefa Cup final in Manchester resulted in the season being extended by four days but dropped points saw both clubs going into the final day locked on 86 points, although Celtic’s goal difference was four better.

The destination of the title would be decided at Tannadice and Pittodrie.

Jan Vennegoor of Hesselink earned Celtic a nervy 1-0 win over Dundee United – so could Rangers claw back the goal difference and steal the title? The answer was no as they fell to a 2-0 defeat in Aberdeen as a long season caught up with them.

Three points. Three trophies in a row for the first time since 1974. Three was certainly the magic number as Celtic dedicated the triumph to legend Tommy Burns who had died the week before.

The very next season was just as close in a battle that went to the final day once again.

Having watched Celtic win three consecutive titles, Rangers were out to stop that run and won the first Old Firm of the season 4-2, only for Strachan’s side to gain revenge at Parkhead before New Year.

In stark contrast to the season that had gone before, it was Celtic who had a seven-point lead at one stage this season.

However, that soon evaporated as Strachan’s side dropped points in 10 of their last 18 league games, a draw and defeat to their title rivals included in that run.

Rangers had a two-point advantage going into the last day as they travelled to Tannadice while Celtic had to beat Hearts at home and hope Dundee United could cause a shock.

However, there were no problems for Rangers as Kyle Lafferty, Pedro Mendes and Kris Boyd fired Rangers to a 3-0 win and a first title since 2005, while Celtic suffered a goalless draw at home which was soon followed by Strachan’s resignation. 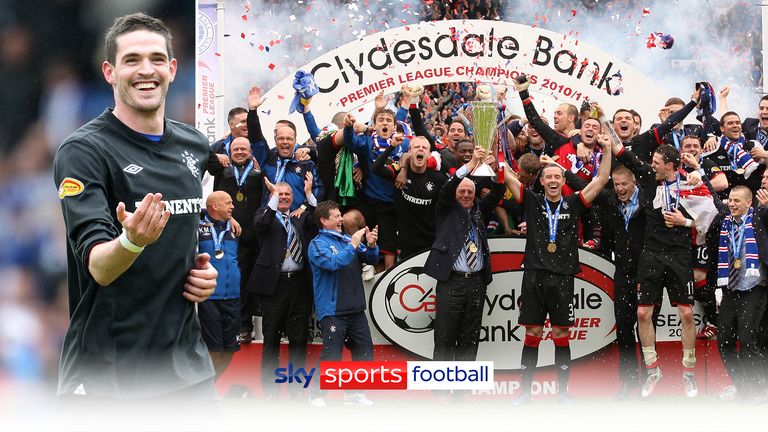 Highlights from Rangers 5-1 win at Kilmarnock in 2011 as Rangers won the top-flight for a third consecutive time, giving departing manager Walter Smith the perfect send-off.

Incredibly, for the sixth time in 13 years, the Old Firm took the title race to the final day as Neil Lennon looked to win the league in his first season as manager, while Smith aimed to bow out with a historic treble.

Celtic, however, were a point ahead heading into the New Year clash by virtue of having played two more games than their rivals.

Georgios Samaras was in inspired form and saw Celtic extend their advantage as they won at Ibrox before Gary Hooper’s double resulted in another win over Rangers in February.

Smith’s side, however, roared back into contention and would drop just four more points across the upcoming 13 games as the clubs went into the final day of the season with Rangers one point ahead.

Celtic again took on Motherwell on the final day but any hopes of a dramatic win were soon extinguished as Rangers took just seven minutes to score three goals at Kilmarnock, with Kyle Lafferty getting the party started inside 50 seconds at Rugby Park.

Celtic also turned on the style, beating Hearts 4-0. It did not matter though, Rangers were champions with a 5-1 win.

The 2010/11 season will be forever remembered by its drama on the final day, will we see more of the same this season?