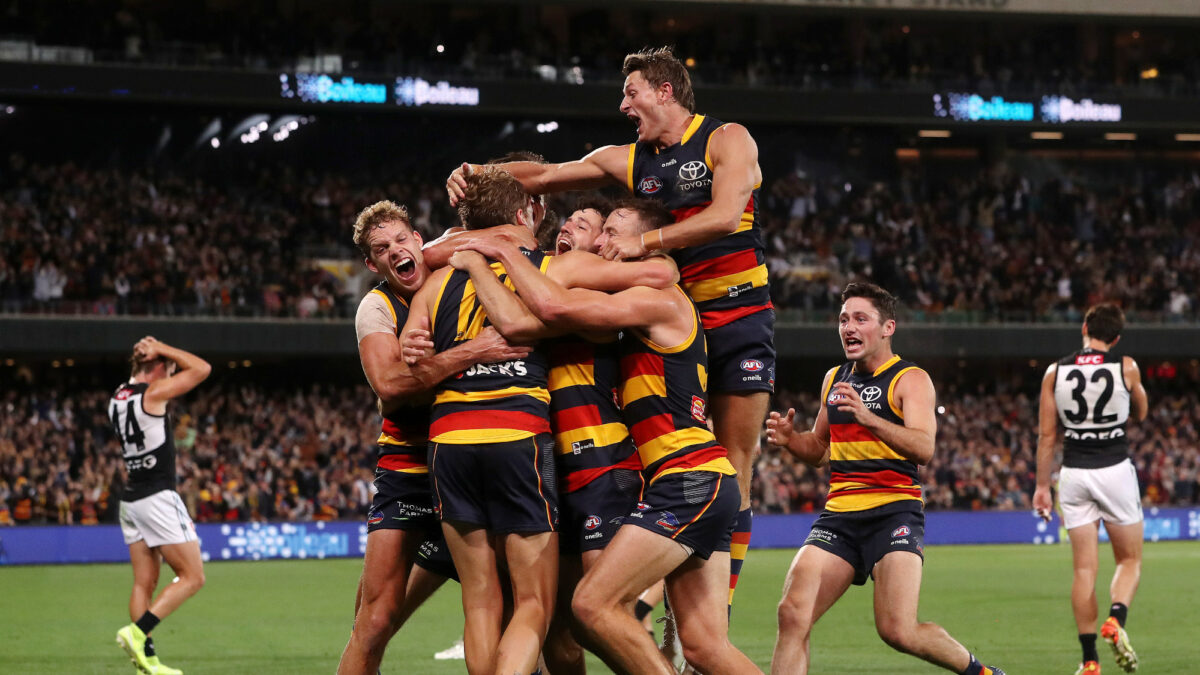 No matter where Adelaide and Port Adelaide are on the ladder, no matter their form line, the most passionate rivalry in the AFL always has the capacity to deliver an instant classic.

The Crows’ unbelievable victory in Showdown 51 was one of the greatest ever. Fierce intensity, goals aplenty, some breathtaking attacking footy from Adelaide at the death – and at the end, the most nerveless kick for goal after the siren you could hope to see from resident superboot Jordan Dawson, to give them a first win in the fixture in three years.

But how many thrillers over the years have wiled away in the graveyard slot of Saturday twilight? Or as the Fox Footy-only match that evening? Or, on a couple of occasions, the even graveyardier slot on Sunday evening?

So what did the AFL do when it finally saw fit to schedule the Showdown under the Friday night lights? Well, make it the second game of the night, start it at 8pm, and make it Fox Footy only while another Victorian-only match takes the Channel Seven spotlight.

Crows and Power fans have a right to feel jilted, and so do the rest of us neutrals who just want to see good footy played in the biggest primetime slot of all. Yes, Melbourne versus Essendon was a decent match – certainly by the standards of the Western Bulldogs-Sydney slopfest the day before – but are we going to be watching Ed Langdon’s bonkers game-sealing goal as much as Dawson’s this weekend?

Friday night double acts are something we’re going to have to get used to this season.

Already, out of nine rounds already scheduled by the AFL, two will see multiple games played simultaneously in the once-showtime spot: Round 8’s Port Adelaide-Western Bulldogs and Fremantle-North Melbourne games joining this round.

Friday night is the key event on any given weekend for a reason: it’s virtually the one standalone game every round, meaning all footy fans regardless of where their allegiances lie tune in. In recent years, it’s been a spot reserved for only the biggest and best sides in the competition (and, of course, Carlton in 2019).

Both matches were excellent, if occasionally untidy, affairs; but even before that finish for the ages, everything about the Showdown screamed intensity from start to finish. The tackle numbers were through the roof: more by three-quarter time than in the entirety of the match at the MCG, and with the occasional spot fire that is typical of the match.

The Crows had their best four-quarter performance of the season, only marred by a string of Power goals from free kicks and 50m penalties in the second quarter that Matthew Pavlich rightly described as ‘unforgivable’ on Fox Footy’s coverage. Even at the end, ill discipline continued to bite them, a 50m penalty given up by young gun Josh Rachele for encroaching into the protected zone that should have been punished with the sealing goal by Travis Boak. 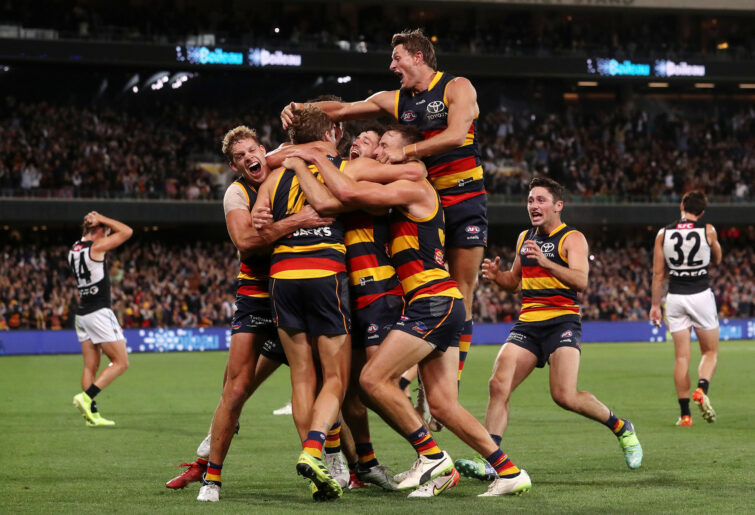 Players surround Jordan Dawson of the Crows after kicking the winning goal during Showdown 51. (Photo by Sarah Reed/AFL Photos via Getty Images)

The Crows, though, deserved this victory no end. They matched a harder, stronger Port Adelaide midfield for the hard ball all evening, winning the contested possession count 141-135. The return of Rory Laird was an enormous help even without the tough as teak Rory Sloane, claiming 15 of his own.

Lost in club great Mark Ricciuto’s spray of their ‘garbage’ foot skills was a desire for them to embrace ‘wet-weather footy’ – fight for the ball, go for territory, and smother the opposition. In dry conditions at the Adelaide Oval, the Crows followed that instruction to the letter.

With only 49 clangers for the night, though, the Crows’ ball use was significantly better as well: Dawson’s finish living proof.

Heading into the season, Elliott Himmelberg, Riley Thilthorpe and Darcy Fogarty were the trio apparently vying for the role of Crows spearhead once Taylor Walker retires, but another contender emerged on the big stage. An outside midfielder throughout his junior years, Lachlan Gollant showed glimpses of talent as a marking forward against Collingwood, but flourished against the Power.

Fearlessly leaping at the ball, leading harder and kicking beautifully when given the chance, he booted four goals from five kicks. Efficiency.

For two sides which routinely butchered the footy last week, that word could be used to describe them both when going into attack. The Crows and Power each generated a score with more than 50 per cent of their inside-50s, breaking away with pace and usually delivering with class to leading forwards – some distance removed from Port’s ‘thump it in and pray’ approach against Hawthorn.

Able to lead at the ball rather than have it sat on his head, Todd Marshall thrived. Still a relative beanpole even at 23 years old, he may never match Charlie Dixon’s pack-busting presence, but the Power found a way to harness his strengths – his speed and footy smarts – to great effect.

Space inside 50 seemed far more apparent without Jeremy Finlayson as a third tall to further clog it up and demand the ball. But for some errant kicking, Mitch Georgiades could easily have booted a bag alongside Marshall, while Sam Mayes was ever-threatening – though his night is only going to be remembered for his mega brain fade at the last.

Then there’s the crowd, which gave the occasion the atmosphere it deserved. It takes some doing to get a ‘noise of affirmation’ going in an ‘interstate’ match, but the Crows fans turned out in force and screamed themselves hoarse. A series of dicey free kicks and insufficient intent calls late in the piece were their reward – Dawson was right to pay tribute to them in his Showdown Medal speech.

As for the stories, well, a 0-3 start to the season for Port Adelaide is just as devastating as a loss to their bitterest rivals. Power fans must be dreading the rest of the weekend, and indeed the remaining weeks until the two sides lock horns again.

27 shots to 21 for the night paints an eerily similar picture to the Swans-Bulldogs clash from Thursday – the difference being that, at the last, the Dogs were indeed able to get it done. Boak’s miss was only the latest of a series of gettable shots that would have put the game beyond reach.

The Showdown always delivers. The only shame is that it had to share the spotlight.