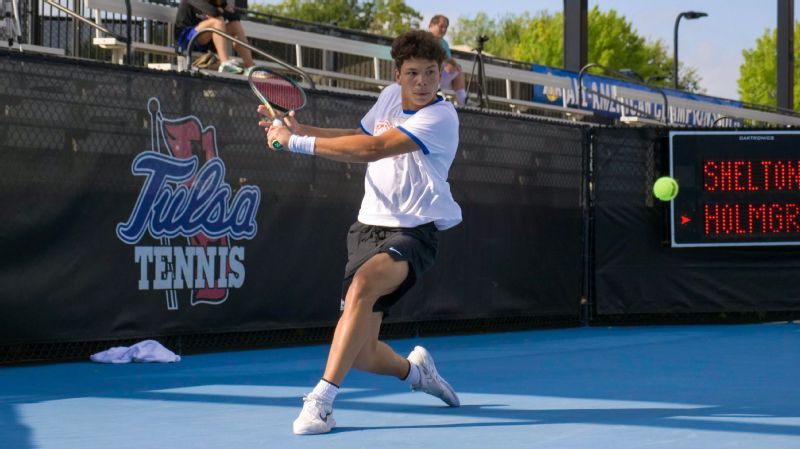 TULSA, Okla. – History has been made. Sophomore Ben Shelton etched his name in the record books after his commanding run at the ITA All-American Championships ended with the Florida Gators’ first singles title at the tournament.

Shelton’s historic run was highlighted by a perfect 12-0 sets record, six ranked victories over his competition, while only allowing his opponents to win 35 games along the way. The Gainesville native is the first player to win the singles title in their debut of the tournament since William Blumberg of North Carolina did so in 2017.

“Super proud of Ben for his play throughout this tournament,” Head Coach Bryan Shelton said. “He played with passion, poise and confidence against some of the best in college tennis. I know Ben is so happy to represent the Gators every time he takes the court. I also take my hat off to Coach Perelman and our Athletic Trainer, Beca, who helped get Ben across the finish line today. Great job!”

The singles finals were set as Shelton would take on No. 28 August Holmgren of San Diego for the championship.

In the opening set, Shelton took the first game from Holmgren, then battled back after being down 30 love to claim the second game for a 2-0 advantage. The Gator was up 3-0 before Holmgren took the fourth game for a 3-1 score. After Shelton went ahead 4-1, the Torero won the next game to cut the lead in half, 4-2. The two finalists traded games until Shelton added on two more to clinch the first set, 6-3.

Shelton and Holmgren began the second set with a 1-1 tie, but the Torero would win the next two games to lead, 3-1. The Gator never backed down. He took five out of the next six games to win the singles title with a 6-3, 6-4 victory over the Torero.

How He Got Here

The Gator put together six-straight wins over ranked opponents to claim the singles title, including three victories in a row against SEC opponents to advance to the quarterfinals.

Shelton’s first-round match in the main draw was against Tennessee’s Martim Prata, who sits at 29th in the ITA Preseason Rankings. Shelton would advance to the second round with a 6-4, 6-2 victory and face the nation’s No. 3 player and No. 1-seed, Daniel Rodrigues of South Carolina.

The Gamecock, who finished runner-up to Gator Sam Riffice in the 2021 NCAA Singles Final, dropped the match to Shelton after losing the first set 6-3 and retiring the match due to injury in the second set after being down 2-0.

Shelton faced LSU’s Ronnie Hohmann for the second time in just a few months as the two competed against each other in an ITF tournament this summer. Shelton picked up his second victory over the Tiger with a 6-3, 6-2 win in the Round of 16.

After dominating his opponents in the previous rounds, the quarterfinals shaped up to be a battle as Shelton went to a tiebreak in the first set and seven games in the next set to beat No. 99 JJ Tracy of Ohio State, 7-6 (7), 7-5.

UP NEXT: Florida will host the ITA Regional tournament in Gainesville on October 21 through October 24 at the Alfred A. Ring Tennis Complex.