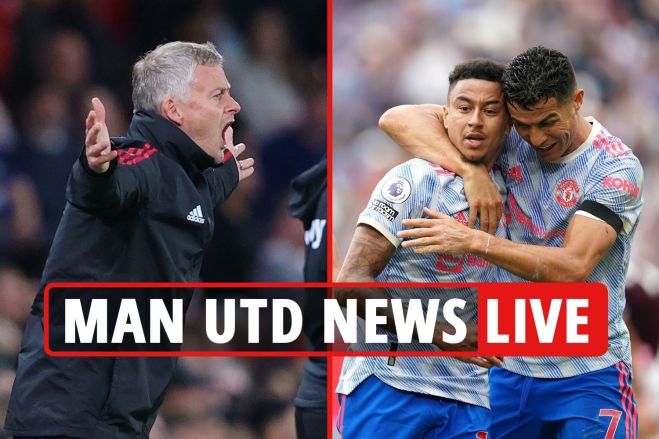 MANCHESTER UNITED return to Premier League action this weekend with a clash against Aston Villa.

The Red Devils crashed out of the Carabao Cup in midweek, but have made a strong start to the new league campaign.

Paul Pogba’s future belongs in England and Manchester United, according to a former Liverpool star.

Steve McManaman has spoken of his preference at seeing the Frenchman commit to staying at Old Trafford despite his contract expiring in June.

He told Horseracing.net, via the Star: “Personally I’d like him to stay in the Premier League and play for Manchester United because he’s a star player with a big name and reputation.

“And everything that comes with that makes the Premier League more watched and more exciting, whether you like him or loathe him.

“His brand – along with Cristiano’s – makes the Premier League better.”

David De Gea claims Cristiano Ronaldo has had as big an impact off the pitch as on it since the “legend” returned to Old Trafford last month.

Ronaldo, 36, has hit four goals in three games after his shock deadline move from Juventus.

And goalkeeper De Gea told Sky Sports: “I think that the impact is already there. It’s amazing to have him back at home.

“He’s already a legend in the club, so I think for the players, for the young lads, for everyone, he’s a great guy to see every day how he works in the gym, how he treats himself, how he takes care of his body, and of himself.

“He is an amazing player and it’s great to see him here every day working hard and helping the team.”

But the pair won’t come cheap with United planning on shelling out £167million for the pair, according to Team Talk.

The Red Devils are said to be one of several European clubs willing to pounce on Haaland when his release clause of £67m becomes active next summer.

But on top of the £67m, United will reportedly have to pay Haaland a whopping £825,000-a-week in wages, plus hand his agent Mino Raiola a separate sum of £34m for his part in the deal.

And the Hammers have already declared that they aren’t willing to take no less than a £100m for Rice.

David De Gea is in a confident mood after his penalty save last week but he knows his role off the pitch can be just as important as his performances on it.

Ole Gunnar Solskjaer praised the Spaniard ahead of Manchester United’s match against Aston Villa and De Gea is pleased at being able to help the team.

He told the club’s website: “It doesn’t matter where you make the save, that’s what goalkeepers do, try to save penalties, make saves, help the team.

“It would probably be amazing to do it in front of the fans at Old Trafford but the feeling is always good. I’m here to help the team, to be a leader, to be an experienced player, so I’m here to help all the time.

“I’m trying my best, trying to be an example for the young lads.

“I try to train very well, to show that I’m ready and then go to the game with the same spirit, experience and quality for the team. I feel well, I feel strong, I feel confident. I’m really happy and that’s the most important thing.

“I think it’s massively important to have players like me, like Cristiano [Ronaldo], Juan [Mata], Rapha [Varane] now.”

De Gea was linked with a move away from Old Trafford over the summer, with Dean Henderson largely preferred to the Spain international towards the end of last season.

Solskjaer said: “He did call me in the summer to end his summer holiday earlier and come back and start his pre-season before, he wanted to be ready, the best possible version of himself.

“Last season was a challenging one, he didn’t play as many games because Dean came in and did very well.

“David has really worked, focused, physically and mentally he’s better and when you feel you’ve done the work, personal best, a few physical tests, it gives you more confidence and motivation.”

Cristiano Ronaldo was denied two clear pens against West Ham in the league last Sunday as well as one in Europe against Young Boys.

Then on Tuesday in the Carabao Cup Jesse Lingard’s claims were turned down after he had his shirt pulled by Mark Noble.

United boss Solskjaer said: “We just have to hope we get what we deserve.

“We should have had three pens in the last two games.

“There was a certain manager who worried about us getting pens last year and after that the decisions were difficult to give, I’ve seen a big difference since then on.

“I will have to hope the refs to make the right calls very soon.”

Klopp had said previously: “Man United had more penalties in two years than me in five-and-a-half years.”