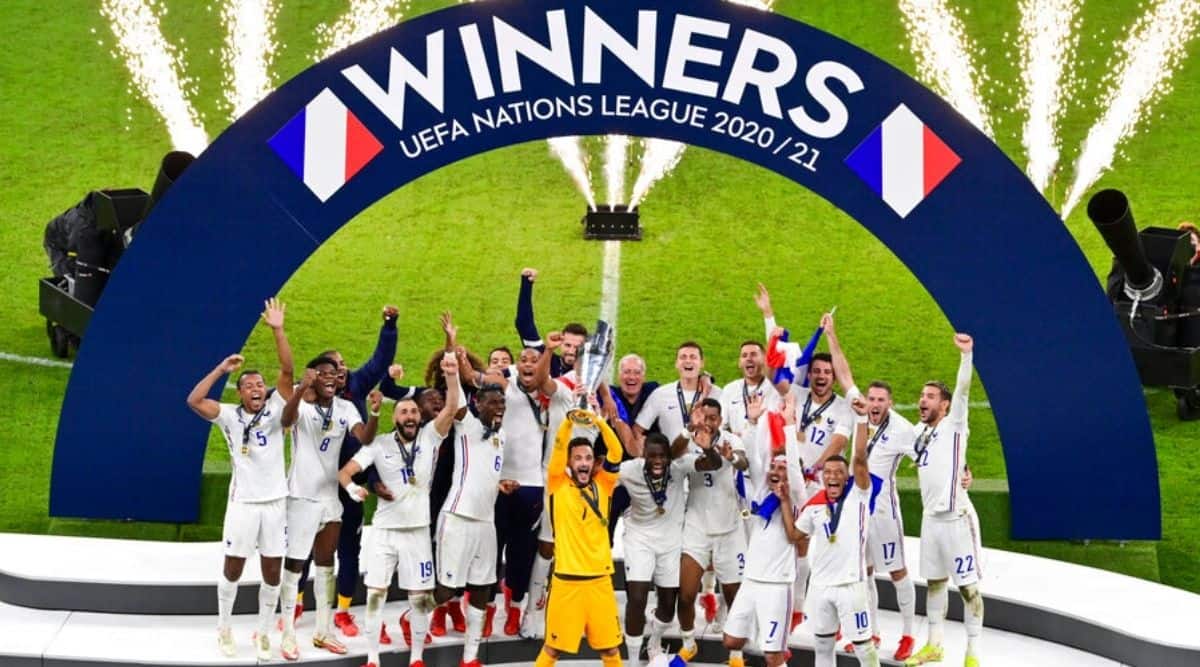 With Paul Pogba excellent in midfield, Mbappe’s speed and movement stretching Spain and Benzema a constant threat, the French were good value for their victory.

World champions France won the Nations League final with goals from Karim Benzema and Kylian Mbappe earning them a 2-1 win over Spain at the San Siro stadium on Sunday.

Didier Deschamps side had struggled to get a foothold in the game during a first half dominated by Spain but after going a goal down, following Mikel Oyarzabal’s strike, they came alive. With Paul Pogba excellent in midfield, Mbappe’s speed and movement stretching Spain and Benzema a constant threat, the French were good value for their victory.

“We showed our character against a very strong team. We never gave up,” said Benzema.”It shows what great teams do — never panic, be patient and wait for the right time.”Luis Enrique’s young Spain side, who had beaten European champions Italy in the semi-finals, had played their trademark possession football with patience and precision but in the end could not compensate for the absence of a genuine striker.

“It was a difficult defeat,” said Spain’s France-born defender Aymeric Laporte.”We have proven to be a great team despite our youth, we have shown better football than them, but what counts is the result.”The first half was a relatively subdued affair with Spain moving the ball well but without dangerous penetration while France were disrupted by the loss to injury of centre-half Raphael Varane. But both sides were awoken after the break when France full-back Theo Hernandez thundered a shot against the underside of the bar after a swift break.

Spain responded to that warning in clinical fashion, taking the lead when Oyarzabal latched on to a long pass from Sergio Busquets, held off Dayot Upamecano and fired into the bottom corner. The French response was swift, however, with Mbappe finding Benzema who cut inside before unleashing a brilliant curling shot into the far corner to make it 1-1. Mbappe then grabbed the winner, 10 minutes from the end, racing on to a through ball from Hernandez and keeping his cool to slot past Unai Simon.

Spain protested that Mbappe was offside when he received the ball but the VAR check found a slight touch from defender Eric Garcia had played the France striker onside. France had keeper Hugo Lloris to thank for two late saves as Deschamps’s side held on for the victory against intense Spanish pressure. Lloris got down well to keep out a low shot from Oyarzabal in the 89th minute and then in stoppage time he reacted superbly to parry a strike from substitute Yeremi Pino.

Nations League, in just its second edition, remains clearly UEFA’s secondary tournament for national sides, as the Italian fans singing of their team’s Euro 2020 triumph reminded, but that didn’t dampen France’s celebrations.”We did not get off to a good start we were dominated and waited until the first goal to react,” said Pogba, who was crucial to France’s response.”We know we have to do better. But if it’s the way we have to win, so be it. Winning a trophy is always good. We’re always hungry for those,” he added.

Earlier on Sunday, Italy had claimed third-place in the Final Four tournament by beating Belgium 2-1 in Turin.