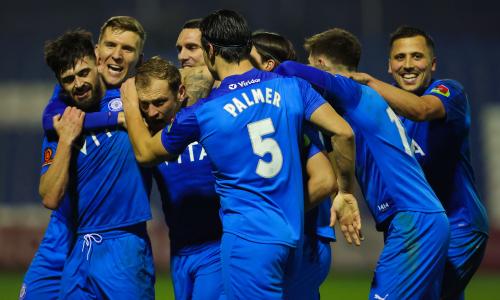 There is a photo on a boardroom wall at Edgeley Park depicting Stockport’s 1997 League Cup semi-final first leg against Middlesbrough. Almost 12,000 fans packed into the stadium that night to watch second-tier County and it is an image that is helping to inspire their hoped-for return to the Football League.

A lot has happened in 25 years but crucially Stockport are four points clear of second-placed Wrexham with a game in hand and could secure promotion over the bank holiday long weekend. But for the more high-profile investment from Ryan Reynolds and Rob McElhenney in north Wales, Stockport might already be popping the corks.

The local businessman Mark Stott bought the National League club in January 2020 with the aim of taking them back to the Championship. Covid curtailed his first season and the second ended with defeat in the playoffs but Stockport are close to playing again in League Two, from which they were relegated in 2011.

One of Stott’s first appointments was the director of football, Simon Wilson, to help implement an ambitious seven-year plan to reach the Championship. Wilson arrived after spells at Manchester City and Sunderland and a period as a consultant, including providing advice to Stott about purchasing Stockport.

“There were natural things you would find with a part-time, underfunded football club,” Wilson says at Stott’s offices in Cheshire. “They didn’t have enough people, they didn’t have the right facilities, couldn’t think further than a week or two in advance so proper planning couldn’t be done. A lot of that comes down to finance – it’s cold and matter of fact. I know Ralf Rangnick has come out with a lot of phrases but I do agree with the three Cs: concept, competence and capital. You need enough of it to start to build things.”

Wilson’s links to City helped Stockport, despite interest from Salford City, acquire the Premier League champions’ former training ground at Carrington after Bury were liquidated. Stockport still needed to invest in the facilities because Bury had failed to maintain them, leading to damp and mould in the dressing rooms. “We have often talked about not waiting until the Championship to become a Championship club,” Wilson says. “We wanted to operate like a Championship club from day one and slowly improve the team, and it will also help improve the team by operating at a high level.”

The wilderness years saw Stockport drop to National League North for six years and become part-time. There were defeats by Vauxhall Motors, Alfreton and Rushall Olympic as the club struggled to find a way out of a downward spiral. Yet season-ticket numbers never dropped below 1,000, a sign of the potential.

Local rivalries were formed against FC United of Manchester and Curzon Ashton in the sixth tier. It was a long way from League Cup semi-finals and beating Manchester City 2-1 in 2002 at Edgeley Park. One of the players that night was Dave Challinor, who returned as manager in November with “unfinished business”. Stockport convinced him to leave Hartlepool in the division above. Challinor’s Hartlepool had defeated Stockport in the playoffs on the way to promotion last season.

“It was a really difficult decision because I’d worked so hard to get to the Football League,” says Challinor. “I’d been working for 10 years to get that opportunity and the reality of it was that things were going quite well. Whenever you’re approached about jobs, you’ve always got to look at the present and then quickly make a decision whether it suits you further down the line.”

Twenty wins in Challinor’s first 23 league games in charge have taken the team from 10th to first. “I would not have come here if I did not think there was the opportunity to get promoted this year; that would have been daft,” Challinor says in his training-ground office. “I felt there was the opportunity to do that. There was three-quarters of the season to go, still a lot of games and points to play for. If on my first day here I’d been offered a playoff place, I’d have been daft not to take it; if I’d been offered a top-three place, I would have been jumping all over it. The run of wins we put together has given us a really good opportunity to go up as champions. These opportunities don’t come round an awful lot so we need to maximise that and do everything we can to get over the line.”

Last November 10,084 were at Edgeley Park to see Stockport dump League One Bolton out of the FA Cup, with an atmosphere reminiscent of 25 years ago. The ground is key to the long-term thinking, with the club acquiring a 250-year lease and planning to expand.

Stockport are unapologetic about their spending; the striker Paddy Madden was signed for £150,000 in March 2021 from League One Fleetwood. A first promotion under Stott, Wilson and Challinor would make building the foundations worthwhile.

“The potential of the football club is to be a top-end League One club and potentially push back to where it was 20 years ago in the Championship,” says Challinor. “This is the hardest league to get out of. If you carry more funding, momentum, a winning team and mentality into a division where there are three automatic promotion places and playoff spots, there is a good opportunity to kick on and go again. The important thing is getting this bit right and give ourselves the opportunity to do that.”