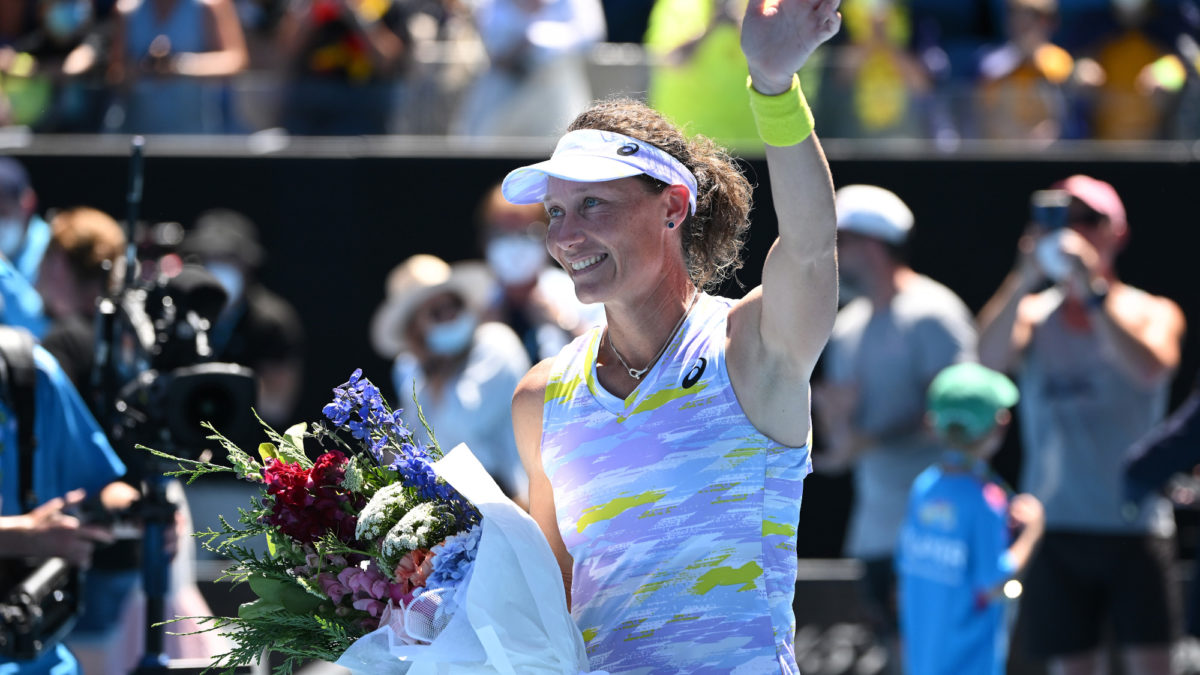 Sam Stosur’s revelation that the Australian Open will be her farewell to tennis has swiftly prompted a deluge of tears and tributes from within the sport.

Her home grand slam is set to give one of the much-loved greats of the domestic game an emotional send-off following her declaration that her 21st year at the Australian Open, in the two doubles events, will be her last before retirement.

The 38-year-old, winner of the 2011 US Open singles, said on Saturday she was “looking forward to getting on the court one last time in front of my amazing fans, who are the reason I go out there and play the sport I love, and enjoying this wonderful ride one last time.”

Her news prompted effusive tributes, particularly from the Aussie women players she’s helped work with, guide and inspire over the years, headed by the lovely words of her friend, former coach and doubles partner Rennae Stubbs.

“I knew this was coming yet here I am, reading your words and crying my eyes out!” wrote Stubbs in response to Stosur’s Instagram revelation.

“Sam, there isn’t a person on tour that could say a bad word about you.

“Your class, professionalism, dedication and love & respect for the sport, your fellow competitors and the people around you, are unmatched.

“There will be a huge void out there on this crazy tour without you but my god was it a good place when you were in it.

“Watching you go from that unsure kid with talent, to a hall of fame career was a pleasure to witness. 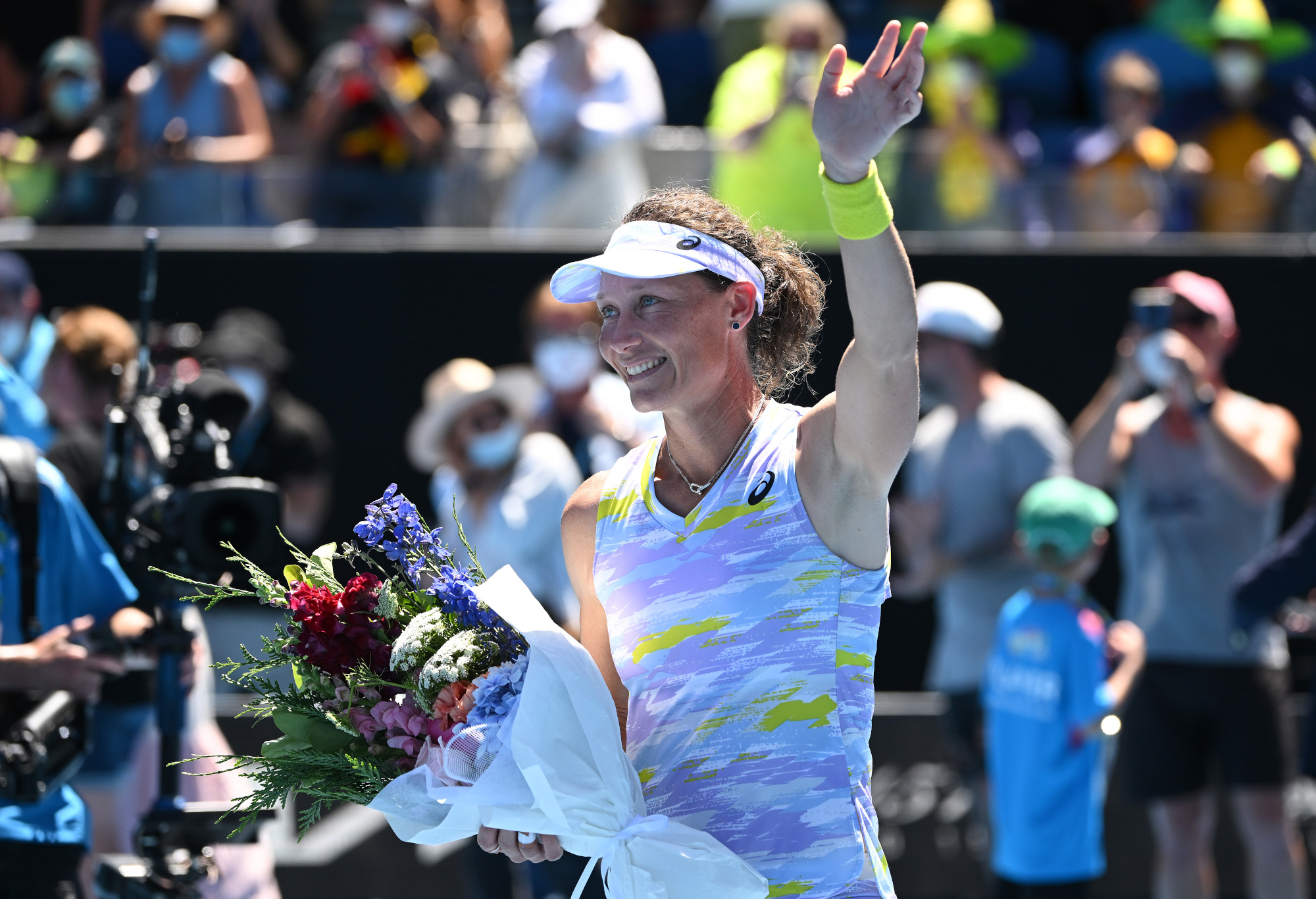 “You have been a role model for so many and you should be beyond proud of that & the player you became but more importantly, the person you are.”

BJK Cup star Storm Hunter told her “we’ve been so lucky to have you as an amazing role model and inspiration Sammy”, while Australian Open officials tweeted: “Thanks for saving the last dance with us, Sam.”

Stosur will feature with Matt Ebden in the mixed doubles, an event in which they reached the final two years ago, and still has hopes of gaining an eighth women’s grand slam doubles crown alongside the ever-dramatic Alize Cornet.

“I feel so happy and grateful to have the opportunity to finish playing at my favourite slam – my home slam – in front of my Aussie fans, friends and family,” Stosur had posted.

“Even though I’ve made the decision to retire from the sport I absolutely love, a small part of me would be happy to keep playing forever.

“I know I’m going to miss playing competitive tennis, all the amazing experiences and emotions that come with being on the tour, and doing what I’ve done for nearly my whole life.

“There are so many stand-out matches, some against legends of the sport, that make me look back and think how grateful I am for my career.

“I want to say a huge thank you to my incredible parents Dianne and Tony, my brothers Dominic and Daniel, my partner Liz and daughter Evie, and all the coaches, physios, trainers, doctors, and all my sponsors over the years.”

The South Korean lost in qualifying for the event but was a late call-up for the first round.

He made the most of it, combining aggressive stroke play with a keen resolve to find a way past the irrepressible Spaniard 6-4 3-6 7-6 (7-4) on Saturday night.

The win made him the only South Korean to win multiple ATP titles and came after he looked gone, down 0-2 and facing a double break in the deciding set.

But the 25-year-old world No.84 held serve then broke back, the players then trading breaks again before the underdog stepped up again in the tie-break.

“So many people are watching in TV in Korea, thanks to the fans in here, supporting me,” a bashful Kwon said before addressing his fans in Korean.

It was an 11th final loss for 34-year-old, world No.26 Agut, who had ended local hope Thanasi Kokkinakis’s run in the semi-finals a day earlier.

Kwon won just three games in a first-round loss in last week’s Adelaide tournament, then lost in qualifying for the second event.

But the 2021 Nur-Saltan champion jagged a spot as a replacement and then blazed away, with a first-round Australian Open date with world No.123 Christopher Eubanks his next task.

“He played an amazing final, we played a nice match and I wish him luck,” Bautista Agut said.

Reigning Australian Open champion Rafael Nadal has bemoaned the quality of the tournament’s official match balls, despite organisers claiming they are no different to the ones used 12 months ago.

Speaking to the media on Saturday, the number one seed said the 2023 balls are more difficult to hit with his trademark topspin, but says the speed of the court at Melbourne Park is fine.

“I don’t know. They say [it] is the same, but the ball is worse quality, without a doubt.

“I think it’s a ball that doesn’t get the same spin as usual. After a couple of hits, the ball loses the pressure. It’s more difficult to hit with the right spin. But I think it’s easier to play when you play flatter on the shots.”