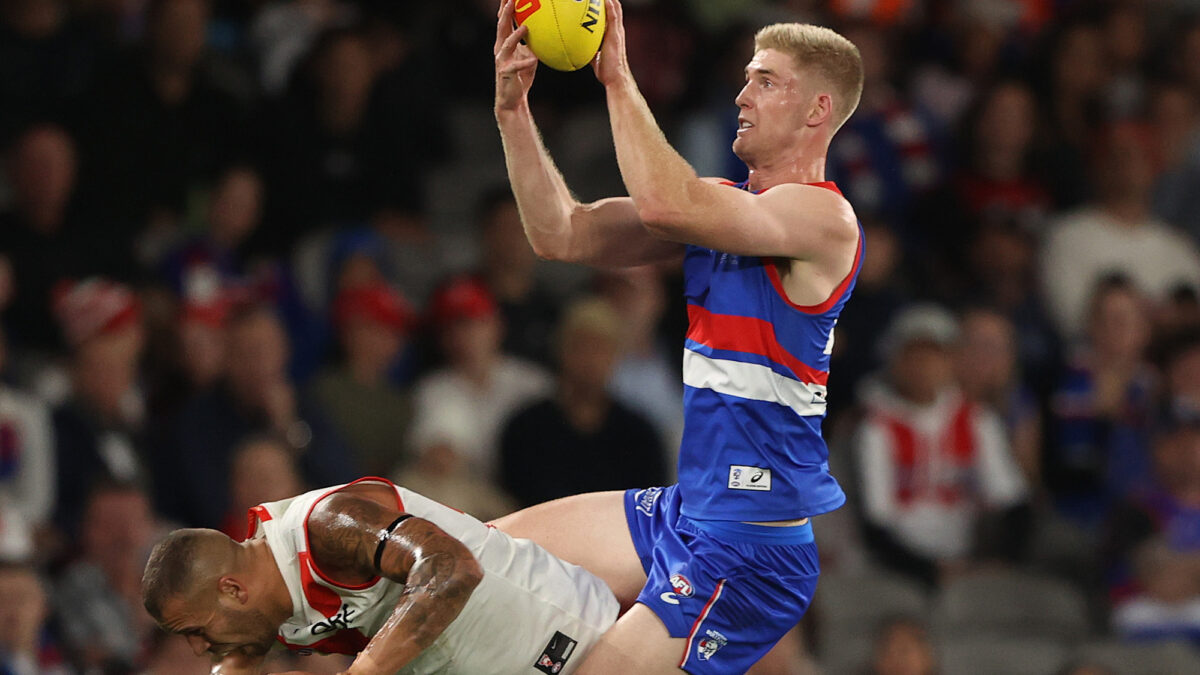 There’s an old saying that you should never argue with an idiot, because they drag you down to their level and then beat you with experience.

During a Thursday night struggle that could charitably be described as ‘scrappy’ – one that left viewers turning off and tucking themselves in at half time and left Channel Seven executives tearing their hair out over a one-goal second quarter – the Swans, they of the slick ball movement, slicing runs through midfield and Buddy Franklin inside attacking 50, were the ones arguing.

The Bulldogs didn’t suddenly rediscover their mojo. Horrible kicking for goal – except for, naturally, full back Alex Keath – prevented them from ever breaking away from the Swans, and nearly cost them at the death. Their passing was regularly wonky and at times utterly confounding, and the Josh Bruce-shaped hole in their forward structure has rarely seemed more apparent.

But the Dogs of old, the ones that beat the Swans six years ago in the grand final, love nothing more than a good scrap. And polish lacking, scrap is what they did, and scrounge, and skirmish, until the dazzling Swans were dragged down to their level.

And then, as the saying goes, they beat them with experience.

The Dogs had seven players finish with 10 or more contested possessions, compared to the Swans’ three – one of whom was Tom Hickey, absent for the last quarter and a half with a knee issue. The likes of Chad Warner, Errol Gulden, James Rowbottom and Ollie Florent are making Sydney a champion side with their swift running and line-breaking kicking: but down in the mud, a Ferrari can lose out to a tough enough plough horse.

Luke Beveridge’s coaching has been derided far more often than most coaches with half their club’s premierships to their name, and regularly rightly so, but the man remains one of modern footy’s shrewder tacticians.

Midway through 2021, Sydney had inflicted an upset loss on a far stronger, more in-form Bulldogs outfit than the one they faced on Thursday night, slicing and dicing them with precise kicks into the middle of the ground and opening up the corridor with ease for their forwards to present.

Testament to that precision was a staggering 123 marks for the afternoon, their disposal efficiency an outstanding 76.3 per cent.

There was no Jordan Dawson tonight of course, but Beveridge clearly learned: the Dogs stacked the corridor, denied the Swans their trademark run and gun game through the middle, and instead forced, especially in the first half, long kicks down the line.

After getting zero help from their midfield last week in conceding 16 goals to Carlton, most to twin towers Harry McKay and Charlie Curnow, the Dogs defenders found this far easier to contain, even after losing Zaine Cordy to a first-quarter concussion. Ryan Gardner may never have played a better game than his job curtailing an always-menacing Franklin inside 50, keeping him to two goals, while the backline looked far more settled with Alex Keath back to something approximating his best.

The Swans went at a tick above 70 per cent disposal efficiency in the first half, significantly lower than in 2021’s corresponding game: especially concerning for a side that love to take the game on and dare to take risks.

With their ball movement stymied, and the Dogs the stronger side at the coalface – they responded to a contested-possession hammering at the hands of the Blues with a 155-131 victory tonight – little wonder the Swans went scoreless in the second term, and managed only one goal in the entire first half.

It wasn’t a lack of supply for their forwards, but rather an inability to make anything of their opportunities. They scored from just 31 per cent of their inside 50s for the night, with the figure down closer to 20 per cent at the main break. That’s not going to win you many games of football, though the Dogs certainly tried to with their own wastefulness in front of the big sticks.

In the first two rounds, that number has been up at 51 per cent, the best in the AFL. But look at the space the forwards have to lead into, or gather crumbs. Poor Jack Henry had no chance of stopping Buddy on the lead for goal number 1000.

When they finally got some room to move early in the last quarter, courtesy of a quick breakaway from defensive 50… wouldn’t you know it, up stepped Franklin.

David King was adamant at half time that the Swans’ kicking had been abysmal, saying: ““You give the ball to the Sydney Swans, you‘d think you’d pay a price.

“They make the ground big, they all separate … you should have clear and obvious targets. But they have just butchered the ball coming out of defence.”

However, 65 turnovers for the match is actually less than the 76 they committed against Geelong last round. The only difference tonight was that when the Swans did make a mistake, the Dogs were there to pounce.

This was very much a typical Bulldogs game from the back end of 2016, but one that was rarely needed last season as the key forward pairing of Aaron Naughton and Josh Bruce meant the midfield didn’t have to be ridiculously dominant from the middle for the Dogs to kick a winning score.

41-32 clearances, a contested possession thumping and a 59-49 inside 50 advantage for the same amount of goals and a stack load more behinds is a tale as old as time for Bevo’s boys. In the end, weight of numbers won out, but this game could easily have gone the other way despite the Bulldogs having led all night and largely controlled the flow.

The biggest reason of all – literally – why they didn’t was, of course, this guy. 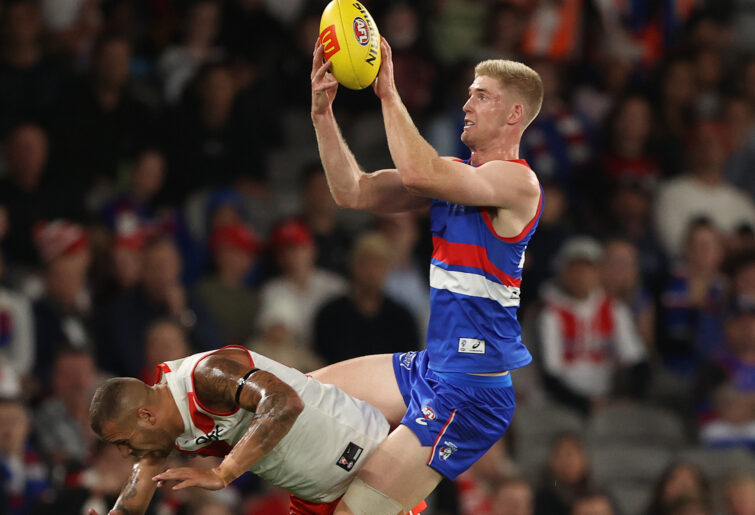 Clearly the best player afield, the much-maligned Tim English has never loomed so large as he did over Thursday night. Long derided for his spindly frame, staggering hitout differentials and that accusation that he was too soft to be a top ruckman, this was a night to defy the critics (and, probably, have West Coast and Fremantle scrambling for the cheque book).

Before this year, English had accumulated 20-plus disposals four times in 69 games (yeah, nice, let’s move on). He’s now done it in three weeks out of three, including back to back 24-touch games, a personal record.

Pushing back into defence, but also working hard enough to be an attacking option – he even indulged in a few bounces! – he clunked eight marks, none better than this mini-speccy over Franklin.

The Swans still shaded the hitouts, but that was mostly because the Dogs’ forward ruck option and backup in the centre square was the 190cm tall Mitch Hannan. When English was competing for the ball, more often than not he’d win or at least neutralise the contest, then become another midfielder once the ball hit the deck in a way the always competitive Hickey just couldn’t match.

It’s worth noting Max Gawn was 24 before his breakout, All Australian season of 2016. Tim English is now 24 himself. Coincidence?

English’s strengths have always been his mobility, excellent skills for a big man, and chop-out marking behind the ball. All those have gone to another level thus far in 2022, while his actual ruck craft has never been better. He will likely never be a Gawn as far as taps to advantage go, but that’s one of the best ruckmen in history we’re talking about

Tipping the scales at 103kg – and looking at him, that feels on the lean side – English is no longer the gangling beanstalk treated with disdain by Brodie Grundy year after year. He’s the giant at the top – steal his harp, which in this analogy might be the ball, at your own peril.

Beveridge believes English is ready to carry the responsibility of the number one ruck role. On tonight’s evidence, he is more than ready: he’s already arrived.

Finally, a note on the umpires, as is almost required when the final margin is 31-14, especially when it involved the Bulldogs.

It’s no secret that the Dogs’ free kick differential is inordinately better than anyone else going around, and has been for years. They tackle hard and win the ball in close, which naturally draws the umpire’s favour: last week, having been thumped around the ball, the free-kick count was tied 19-19. Their knack for drawing high contact free kicks – no team drops the shoulder as a collective better than the Dogs – helps, as does Cody Weightman making absolutely sure any sort of contact is noticed.

From the stands – and note this comes with a sizeable red, white and blue asterisk attached – the most egregious of the frees were two non-holding the ball calls during the third quarter, one where Errol Gulden ran down Bailey Dale and was inexplicably pinged for holding the man instead, the other where Franklin chased down Tom Liberatore a few minutes later.

You could probably, though, make a case for the second one that Buddy doesn’t actually tackle him, but rather impacts Liberatore and jars the ball loose.

By and large, though, the frees on both sides were there – you can’t argue that this isn’t one of the more obvious, and brain-dead, 50m penalties of the year, for instance.

This was not a game decided by the umpires, as easy as it is to claim that in a game with less than a goal the difference into the final minute with a discrepancy that large.

The Bulldogs were the better side for all of the night, bar pockets of the third and fourth quarters where the Swans strung together passages of play reminiscent of the first two rounds. But for wayward kicking for goal, the match would have been done by half time – few teams ever lose with 11 more scoring shots, after all.

And just look at the expected scores!