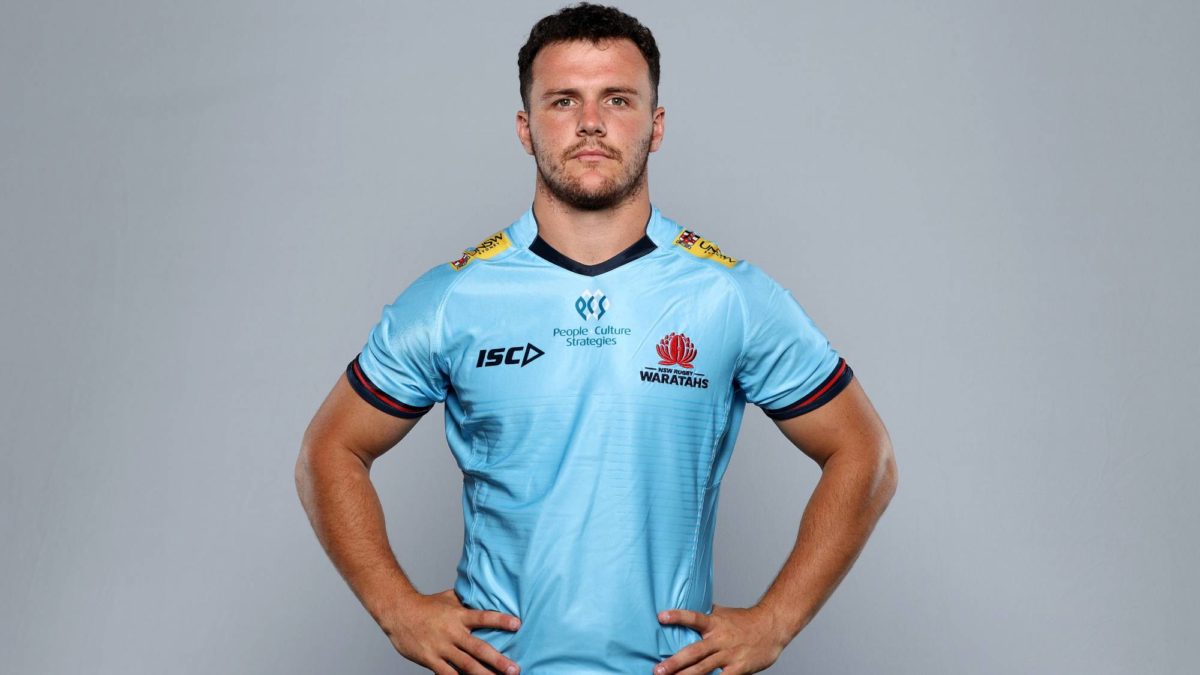 Dylan Pietsch is no stranger to tears.

There were the tears when he faced daily struggles with his mental health, including an attempt on his own life four years ago.

And there were a different, sweeter kind of tears – those he couldn’t contain this week when he was named for his Super Rugby debut with the Waratahs.

Another Super Rugby rookie – his coach Darren Coleman – spoke of the joy he got from selecting Pietsch – an Olympic sevens player and an indigenous man who dreamed of playing for the Wallabies as a four year old in his small country town of Leeton.

Pietsch is one of two new boys in the Waratahs starting side, and the other, Kiwi lock Geoff Cridge, is earmarked as potentially having a massive impact on the Tahs’ tight five this campaign.

But Pietsch’s physical attributes will likely mean all eyes are drawn to him at CommBank Stadium.

“For an indigenous kid from Leeton to make his debt is awesome. He was very emotional when he got announced.

“I read a quote – it was quite sad actually – that his family has had its trials and tribulations. He’s done really well for his family and I know they’ll be immensely proud and I’m sure they’ll be up here tomorrow.

“I’m really excited. One of the beauties and joys of coaching is when you can give kids like that an opportunity.”

Last year, Pietsch revealed the issues he faced in his rugby career in an interview with Fox Sports.

“I had this routine,” Pietsch said. “I’d look in the mirror and cry.

“I’d go to bed, not sleep, I’d get up at 1am and go walk from Eastlakes to Eastgardens – it’s like a 15-minute drive.

“There was a bridge and I always contemplated it. I’d get back at five, get up at six and go to training and it was my routine for months.

Pietsch said it took a conversation with his father Troy to save him.

“I have a reason why I play rugby and he’s definitely a big reason why.

Pietsch turned his attention to community work – he is a regular volunteer at Ronald McDonald House and speaks in schools about mental health issues.

“I’m really proud of myself for how I’ve developed mentally,” he said.

His selection was the next step in a journey he hopes takes him to a Wallabies jersey.

“It’s pretty surreal, I tried to hold back my tears during the team meeting but didn’t really do a good job of it because I’ve wanted to play Super Rugby since I started at Leeton Phantoms when I was four,” Pietsch said.

And at 23 he’s about to reach a physical peak.

Coleman said Pietsch was an example of changes in professional sport as giants start to take control.

“It’s a rarity that runts of the litter make it,” Coleman said.

“There’s some guys in top flight rugby – your Cheslin Kolbe’s and Damien McKenzie’s – but they’re absolutely rapid and their agility is off the charts. Everyone else you’ve got to be big unless you’re a half back.”

“He’s around 100kg, runs close to 10 metres a second, and he’s got a good right foot step. He’ll rip in and give a bit of his own physicality back to a couple of big physical wingers from Fiji as well.”

Tahs halfback and skipper Jake Gordon expects Pietsch to make an instant impact, having impressed in a trial win against the Reds last weekend.

“He played sevens and is a great athlete,” said Gordon.

Our experts Brett McKay, Harry Jones and Geoff Parkes cast their eye over the Super Rugby contenders in episode 1 of our new podcast. Click below to play or follow on Spotify.

“You saw his first carry on the weekend – exploded into the seam off a line out and made a 20 metre break. He’s a great athlete, dangerous out wide, we’ll just need to get him the ball in the right areas.”

Cridge, 27, may prove less eye-catching than his young fellow debutant, but he is shaping as a key man.

Former Wallaby Morgan Turinui said Coleman’s decision to resurrect the Kiwi’s Super Rugby career after two years out on the cold, was a masterstroke.

“The most impressive thing he’s done for me, and I know it’s going to sound weird, is signing Cridge from New Zealand.

“It was a really mature decision to find a tried and true more experienced player for the lock position and it’s what he really needed.

“He’ll know every single footy player playing Shute Shield but super rugby is very different and he needed to shore up that front five straight away.”

“Cridgey has had an interesting last couple of years, had a lot of injuries,” said Gordon.

Gordon says his team is prepared for a testing time against the Fijians.

“It’s going to be a free-flowing game,” Gordon said.

“We just need to play at the right ends. We’ve had a habit of playing too much footy in our own end of late.

“We saw that last year in the Trans-Tasman series where teams who are really good off turnover attack, really hurt us.

“We’re looking to play at the right end, be really disciplined in our attack and take first points on offer.”

Drua coach Mick Byrne will lean into his team’s strengths.

“I don’t want to be smart about this but the way we play, there’s an element of surprise,” Byrne said.

“Last week we scored a couple of set-piece tries, working through our game plan.

“But when that ball hits the ground there’s a whole new element of the game we can play and I want to keep encouraging our players to play like that.”

Byrne expects a changed Waratahs from the winless rabble of 2021.

“They’re going to be more than competitive,” Byrne said.

“It’s a change of the guard leading them. The players will be reinvigorated because of that and there’s motivation to come out and show the people and yourselves that they really want it.”

Coleman’s team has strung together three trial wins – and he said the players were enjoying winning again.

He joked that he had asked SANZAAR if they could award them some points for those victoties – aware that trial form can be a mirage.

“Everyone is starting on zero so the Reds win and the Brumbies win will be a distant memory if we come out and perform poorly tomorrow and lose,” Coleman said.

“We’ve had a few wins but are we winners yet? I think it’s a bit early to say that.

“So starting well is paramount, particularly for a team coming off a season it’s just had.

“They’ve had a few trial wins, confidence is up, the boys are enjoying each others’ company so there’s no excuses for tomorrow.”

Watch every match of the Super Rugby Pacific on the Home of Rugby, Stan Sport. Round 1 kicks off this weekend with Waratahs v Fijian Drua (Friday 7pm AEDT), Reds v Rebels (Saturday 7pm) and Brumbies v Force (Sunday 1:30pm AEDT). All streaming ad-free, live and on demand only on Stan Sport.