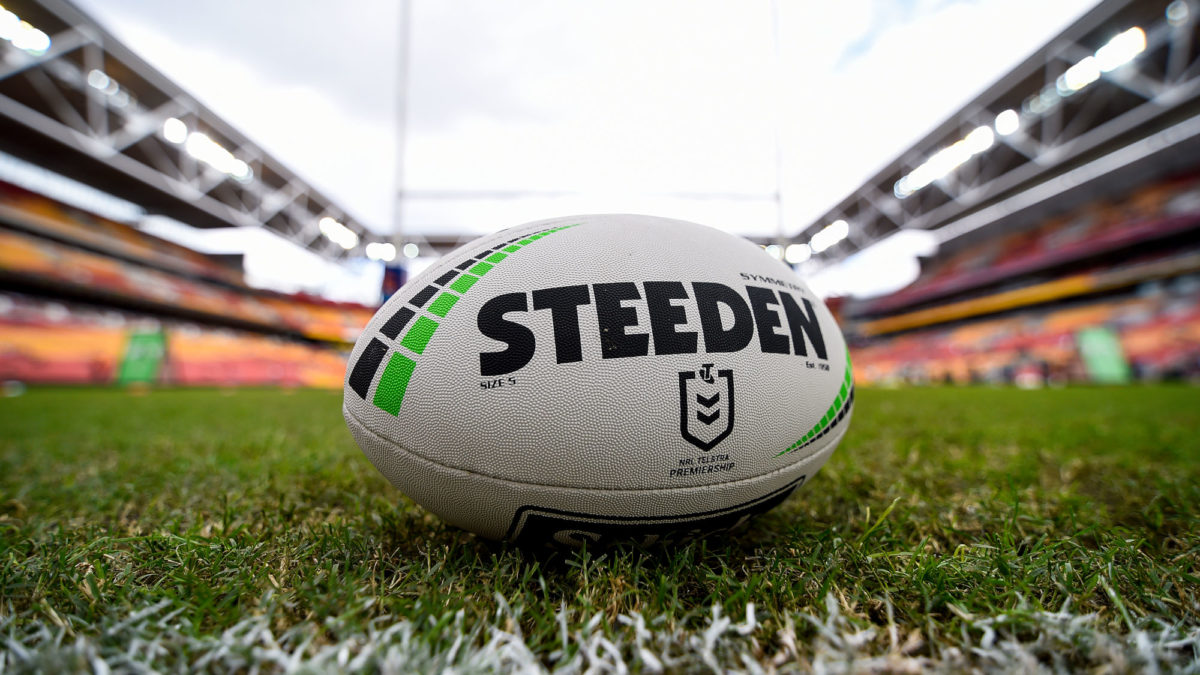 As for previous articles in this series, I will attempt to put together a quality team for each NRL club made up solely of players since 1980 who never went beyond club level. The criteria for selection is:

– No representing at senior level: internationals, State of Origin, Prime Ministers XIII, City vs. Country or All Stars.
– Current players are excluded.
– Players are only eligible for the club they played the most first grade games for.

This is the first article where the club is old enough to straddle my 1980 cut-off. For these clubs I basically take it case by case. Thirty games after 1980 is generally the cut-off to qualify.

There are a lot of long-term players here, reflecting players who straddled the 1970s to 1980s. Cronulla didn’t get much love from selectors in that era despite a fair bit of success, but it also reflects that players didn’t change clubs as often in the past.

Mick Mullane Jnr was part of a little football dynasty, with his father Mick Mullane Snr playing in the 1940s, his brother Greg playing with Mick Jnr in the 1970s and his son Jye appearing in the 2000s.

Mullane played his entire first grade career with Cronulla and was a key team member from fullback as they enjoyed a successful period, highlighted by their 1978 grand final appearance. He played in all the lead-up finals and in the grand final draw, but was ruled out of the replay. Mullane also played in the Sharks’ mid-week Cup final loss to Souths in 1981.

Mullane scored a lot of tries for a fullback from that era, including three hat tricks. His 53 tries is only 18 less than Hall of Fame compatriot Graham Eadie, but from 114 less games.

Rick Bourke was a flashy blond-haired outside back equally at home at fullback or on the wing. He scored the club’s only try as a replacement in the Sharks’ first-ever grand final in 1973 and played in both 1978 deciders, firstly on the wing and then at fullback replacing Mullane.

Bourke also played in the Sharks’ 1979 Amco Cup win, scoring a try as they defeated a Combined Brisbane side in the final.

The former Sharks Chairman played over 120 games in nine seasons as a one-club man in the 1980s and 1990s. He appeared in back-to-back finals series in 1988 and 1989 when he was at his best, playing over 20 games in three consecutive seasons.

A successful businessman, Coleman became chairman of the Sharks for all of two months in 2013 as they were finalising their property deal around Shark Park and dealing with their doping scandal. He was also the star of a Tooheys television commercial in the 1980s.

Chris Gardner had played just four first grade matches as a centre or from the bench when he was thrust into an injury-depleted Sharks side for their 1978 grand final replay loss to Manly. Gardner went on to play eight seasons for the club, appearing in the 1979 and 1981 finals series.

He was the competition’s equal-leading try scorer in 1983 with 17 tries.

Older brother to Mick Jnr, Greg Mullane is yet another long-term Sharks player form the 1970s to 1980s to never represent and thus make this side. Mullane split his time in the NSWRL, playing nearly 100 games for Cronulla plus another 47 for the Canterbury Bulldogs.

After leaving Cronulla, Mullane won consecutive premierships with Canterbury in 1984 and 1985, appearing in both from the bench.

How did Mitch Healey never even gain City-Country selection? Over 200 first grade games with a winning record (the fourth most in Cronulla history). A team organiser with a good kicking game. A grand final in 1997. It is one of life’s mysteries that he never even got a bench spot.

Healey spent 12 seasons with the Sharks and played over 20 first grade games in his last nine seasons straight. During that time the Sharks were consistently competitive and Healey appeared in five finals series with the club.

Although rarely the first choice goal kicker, Healey was the club’s top points scorer in 1992 and 1993 and was name the club’s best and fairest in the latter year.

Have any other players won the award for the competition’s best player and yet never received any representative recognition? Probably, and I haven’t bothered to check, but it still seems odd that Cronulla’s Barry Russell was recognised as the best player in the game in 1988 but still has the dubious honour of making this team.

Russell was a smart but injury-prone halfback for Cronulla for seven seasons in the Gavin Miller era of the late 1980s. He debuted in 1985 but then missed an entire season due to two shoulder reconstructions. Nevertheless he returned better than ever and was awarded the Rothmans Medal in 1988 despite missing half a dozen games due to injuries. He retired at just 26 years old after 76 games for the club.

Russell later became CEO of the Sharks, but left in 2019 after identifying and self-reporting the salary cap and scandal that raised questions about their 2016 premiership and the residual effect of the Shane Flanagan years.

Dave Boughton was a solid lock forward for Cronulla during the 1990s. He played six seasons at the club, including a finals series in 1996, before moving to the Adelaide Rams for the Super League season of 1997. After the club folded in 1998 Boughton left for England for a final season with Huddersfield.

Craig Dimond came from a pretty fair pedigree, with both his father Peter (10 Tests) and uncle Bobby (24 Tests) playing for Australia. After debuting with the Illawarra Steelers in 1983, Dimond spent eight seasons with the Sharks in two stints, split by spending 1989 with premiership winners Canberra (he was plagued by injury that year and did not feature in the grand final).

Dimond played in Cronulla’s 1988 minor premiership team that fell just short of a grand final appearance. In 1991 he made a then-record 67 tackles against Brisbane. It’s a shame Dimond’s teammates didn’t make a few more with the Broncos galloping to a 40-2 victory. Dimond was awarded the club’s best and fairest that year.

After leaving Cronulla, Dimond returned to Illawarra for a final season in 1994.

Courtesy of my alphabet teams a few years back.

Sam Isemonger was a second-rower and bench forward for Cronulla and St George, making 95 NRL appearances.
A local Cronulla junior, Isemonger played seven seasons for the Sharks. His appearances were limited in 2001 and 2002 by two knee reconstructions, playing just three first grade games in two years.

His best year was 2004, when he broke into the starting side and played all 24 games for the season.

After retirement Isemonger has coached the Como Crocodiles in the Cronulla local league.

Porter was a hardworking prop for the Sharks for a decade. He is the son of Cronulla’s first captain, St George premiership winner Monty Porter. Porter could play prop or hooker and was part of the club’s finals campaigns in 1988 and 1989 as a rake.

After making 22 appearances in his debut year in 1984, Porter played at least 10 matches for the club for the next 10 seasons.

He also played a year in England with Hull Kingston Rovers in 1988/89.

Local junior Pierce played a decade for the Sharks, often as a bench forward, with a two-year gap in the middle to prop up the Adelaide Rams. Pierce played all games in 1999 as the Sharks secured the minor premiership but fell in the preliminary final to St George Illawarra.

He backed this up with 25-plus games in each of 2000 and 2001. All up, Pierce played in five finals series with the Sharks, including losing three preliminary finals.

After leaving Cronulla, Pierce spent a year in England with the Leigh Centurions.

It’s tough being a hooker in the NRL, where representative opportunities can be few and far between. Dean Treister is a player who could have handled higher honours, but had to settle for a lengthy career with the Sharks, the captaincy and a grand final appearance in 1997. He also won a minor premiership and appeared in three preliminary finals and 16 finals in total during his nine seasons with the Sharks.

After leaving the Sharks due to a clash with new coach Chris Anderson, Treister played a season with Hull FC in the English Super League.

In 1994, Treister captain the club’s 1994 President’s Cup (i.e under-23s) team to a premiership. His victory speech consisted of “Too easy!”

In 2016, local junior Treister and his family flew in from their home in the US to witness the porch lights being turned off.

Speechley was unlucky to miss out on this team. He holds the distinction of being the last active Newtown player to still be in the NSWRL, lasting until 1995. In a 13-year career, the five-eighth also played for Souths and Parramatta, as well as the Jets.

However, Speechley’s main time was at Cronulla over seven seasons, including the 1988 minor premiership and two finals series. He was a noted defender, leaving the attacking flair to ET, Sparkles McGaw and the like, while he cut opposition attackers off at the knees.

Half Jeff Robson split his time in the NRL between Cronulla and Parramatta mainly, after learning his trade at Manly, where he only played six matches in four seasons. Parramatta plucked Robson from reserve grade halfway through 2009, and Robson rode the Hayne Train all the way to the grand final.

This established him as a first grade half and in 2012 he joined Cronulla for a productive four-year stint, including three finals series at halfback and captaincy of the club when Paul Gallen and Wade Graham were injured.

After leaving Cronulla, Robson played briefly with the Warriors before returning to Parramatta for a final couple of seasons to finish up at 34 years old. All up, the half played nearly 180 first grade games in 14 seasons.

Rowland Beckett was the Sharks’ hooker during the early 1980s. He had made a few brief appearances from reserve grade since 1976 but was stuck behind club stalwart John McMartin. One of those brief chances was in the 1978 grand final replay, one of many injury and suspension replacements.

Another was the winning final of the 1979 AMCO Cup.

Beckett got his chance halfway through 1980 and became the first-choice rake for the next four seasons, playing another semi-final in 1981 and the final of the Tooth Cup that year. Beckett finished his career with a season for Easts in 1984.

‘Whippett’ was a speedy winger who played four season with the Sharks in the 1990s. His best season was 1999, where the winger scored nearly half of all his tries for the club in a single season (18). This helped push the club to the minor premiership although they failed to make the grand final.

After leaving Cronulla, Howland played a season with Canterbury before finishing with four seasons at Penrith, where he played in their World Club challenge loss to Bradford in 2004. After retiring in 2006, he played for his junior team Gymea and won the 2007 A Grade premiership.