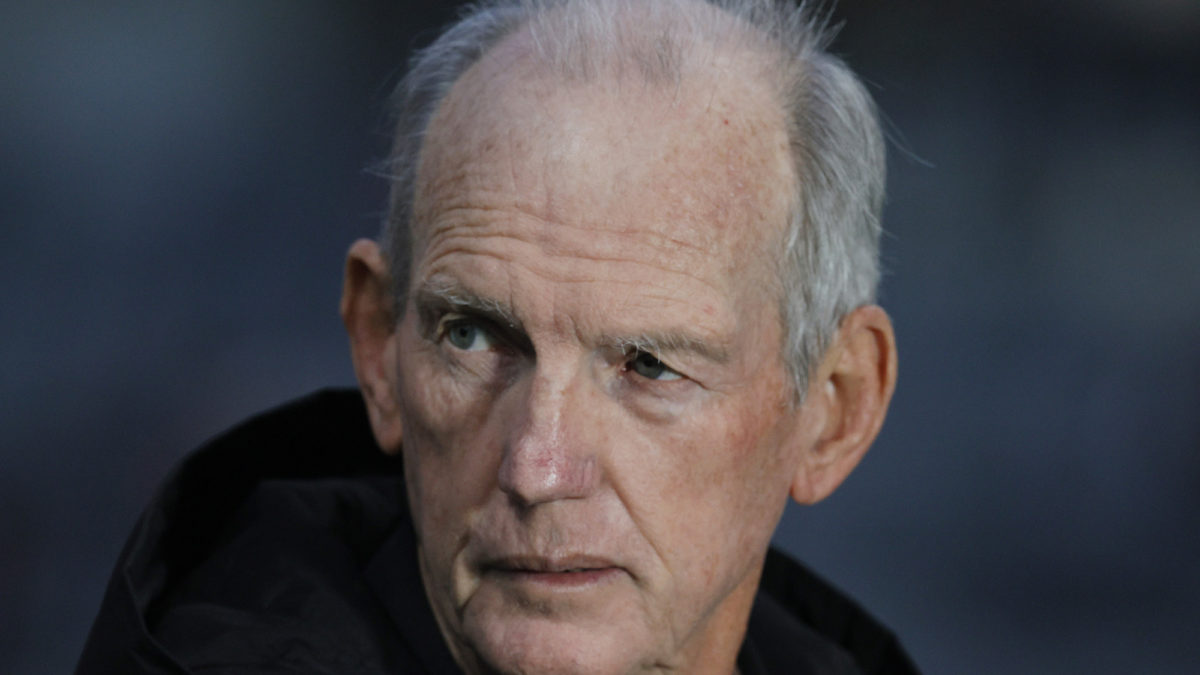 This is an extract of Matt Cleary’s new book about the Canberra Raiders called “The Milk: a 40-year odyssey of fandom for rugby league’s great enigma.”

Ahead of the 1986 season Chris O’Sullivan’s contract was coming up for renewal and he said to Don Furner, because he was a singular fellow not backward in coming forward, that as the halfback he wanted money befitting a halfback, that being the most money of anyone in the club.

“Sully,” Furner replied, “you’ll get the most money when you play for Australia.”

O’Sullivan took that on board. The Kangaroo Tour was coming up at the end of the year and in ’85 he’d played for the Australian President’s XIII against Papua New Guinea. And with the lure of the end-of-season tour, his form went up commensurately. So much so that when experts in Rugby League Week, Big League and the newspapers were selecting their Kangaroo Tour squads, O’Sullivan’s name was in most of them.

And our Sully got to thinking: I’m a bloody good show.

Alas, by season’s end, the coach of Australia – who was Don Furner – picked the gifted 21-year-old Penrith Panthers halfback Greg Alexander as back-up to the great Peter Sterling, with Des Hasler in, too, as a utility.

And O’Sullivan was not well pleased. And you might say he stewed upon it. For several months.

Ten minutes into the Raiders’ Round 7 fixture in April of 1987, against the Penrith Panthers at Penrith Park, O’Sullivan tore out of the line and ripped off a ferocious head high tackle upon his opposite number, G Alexander.

Referee Dennis Spagarino gave O’Sullivan a very quick talking to and then sent him off. As O’Sullivan walked off the field, he went by coach Furner on the sideline and said: “How’s your fancy bloody halfback now?”

Furner, it is said, just shook his head. Then he watched the 12-man Raiders – who were down to 11 men when Peter Jackson spent ten minutes in the sin bin – win 11-4.

O’Sullivan was later suspended for three matches by the NSWRL judiciary, after which Furner told reporters, “I just can’t believe that. It was just an open-handed slap.”

O’Sullivan was a stalwart (even ‘legend’, at least in relative terms) of the Canberra Raiders. He was a super halfback who’d been there from day dot. He’d scored the last try in the team’s first win. In 1986 he became the first Raiders player to notch 100 games.

Yet halfway through the season, co-coaches Wayne Bennett and Furner decided they needed to switch their halves and play Ivan Henjak at halfback and O’Sullivan at five-eighth. And O’Sullivan made it plain he was not happy about it, again.

“He played his heart out every week, long before he had any good players around him,” Bennett told Adrian Prozenko in The Sydney Morning Herald.

“I went and told Chris that he was going to go from halfback to five-eighth. He didn’t like that at all, he lost the plot. He was threatening a whole lot of stuff.”

It was kind of a big deal. Bennett told Furner who told Bennett that he would handle it. He returned an hour later to declare situation handled. O’Sullivan would play five-eighth. It turns out he didn’t mind where he played. He just wanted to wear the number seven.

“I didn’t care what number he wore,” Bennett said.

“We needed Chris O’Sullivan to play, we didn’t need him not to play. But with the approach Don took – I’m a young coach, [saying] ‘You’ll do this and that’ – it wasn’t his way.

“Don went and put it to him another way. That was a pretty instrumental change and it made a big difference to us. I learnt a lot. How to handle players better, be more conciliatory at some stages.

“So we got the job done and made the grand final.”

That they did. And my standout memory of the match is Cliff Lyons palming off O’Sullivan to score beside the posts.

No shame in it. Lyons was a gem, for mine the most gifted soft hands man outside Mark Ella. I once saw Lyons playing flyhalf in a legends rugby match commemorating Canberra Royals RFC’s 60th anniversary. It was a fair quality game.

Scott Gourley played, he’d have been in his late 30s, thereabouts, still fit. There were former Wallabies, former state players, mid to late 30s, out there having a go. It wasn’t golden oldies – even if 56-year-old Ray Price played, you could still see that tackling style in there.

And the best player on the field, among all the ‘young blokes’, was 49-year-old Cliff Lyons. Such silky hands. And time. So much time. He just wafted around, playing the game at Cliffy speed, which was as fast as he liked. And every pass was delivered perfectly for the receiver.

Whether the runner was charging off a hip or hitting a hole out wide, Cliffy, with a combination of guile, subtlety and all over body language, would give that team-mate the optimal opportunity for progress. And that’s why he won the Clive Churchill Medal.

Another memory of ’87 is Kevin Ward’s little shorts that seemed to ride up into his groin out of fear. Also, Mick O’Connor being offside for Dale Shearer’s wobbly old cross-kick.

O’Connor was a Curtin kid and former Royals player, my mum and dad knew his mum and dad, and I was at Phillip College with his sister Sharon who used to date Brian Marhaba, who in Year 7 at Woden Valley High pinched my iridescent green-striped Asics footy boots that were like Greg Hartley’s, and we became friends, and then he took Paul ‘Harry’ House to junior Canberra Raiders training and then Harry took Brian’s spot in the SG Ball team that Brad Clyde played in.

Anyway, Cliffy killed ‘em that very hot day in 1987 and with Ward was best afield in the 18-8 victory. And there’s a fine photo of Manly captain Paul ‘Fatty’ Vautin being chaired off by a team apparently unmolested by a cap on salaries.

Good year for the Raiders, ‘87. Even after five seasons of existence there were games they’d run out onto Seiffert Oval and the visiting team’s flags outnumbered local ones, particularly the big teams – Parramatta, Canterbury, St George.

But by Round 24 of ’87 when the Canberra Raiders 22 (Matthew Corkery, Gary Coyne, Ivan Henjak, Peter Jackson, Chris Kinna tries; Corkery one goal) defeated the Canterbury Bulldogs (Colin Whitfield two goals), Seiffert was a sea of green.

Though the Raiders had the bones of a burgeoning dynasty – Mal Meninga, Steve Walters, Kevin Walters, Gary Belcher, Glenn Lazarus, Sam Backo, Brent Todd, Steve Jackson, Dean Lance, Gary Coyne – they were vast underdogs against Manly. They had beaten the Roosters the week before, 32-24, in Meninga’s first game since breaking his arm on the Seiffert Oval posts in May.

David Trewhella was a tough man, a hooker and backrower, a tackling machine. He went on to play Origin. And Meninga – arm guard the size of three SS Jumbos wrapped in plaster – crushed David Trewhella like a rank Brahman bull running over a little goat.

Mal Cochrane was Dally M Hooker of the Year in ’86 and ’87. Ron Gibbs was ‘Rambo’ and among the competition’s maddest of meat axes. They were coached by Bob Fulton. There were no Brisbane Broncos or Newcastle Knights.

You wonder how they ever lost.

This is an extract of “The Milk: a 40-year odyssey of fandom for rugby league’s great enigma” by Matt Cleary. Get a copy at www.themilkbook.com.