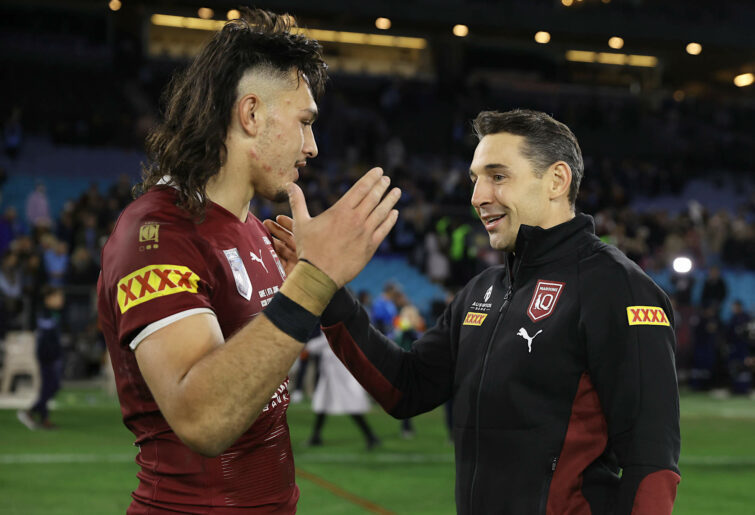 It’s often said in sport that a good big man will always beat a good small man, and this is often the case in rugby league.

What player doesn’t enjoy running out on to the field in the knowledge that he’s much bigger than his opponent and therefore has the advantage when the collisions come?

Here’s a team of Queensland Origin players picked solely on size, and the only other criteria is that they must have run out for the Maroons in Origin on at least one occasion in their selected position.

(Numbers in brackets are their estimated playing weights and the number of games played for Queensland in that position).

Easy choice as the only other contenders were the giant Paul Hauff, who was more tall than heavy, and Wendell Sailor, who’ll get a run on the wing.

Maybe Sailor was even heavier than this towards the end of his career when he chose to just run over the opposition, and the fact that Coates is still growing and so fast for a big man is scary. Some other heavyweight wingers in contention were Kyle Feldt, Corey Oates and Lote Tuqiri.

What a nightmare it must have been for the NSW outside backs to come up against these two giants. Tonie Carroll, Chris Close and Darren Smith also tipped the scales well over 100 kilos.

Queensland diehards will be disappointed not to see Wally Lewis here but Flannery probably has him covered for weight.

No surprise that poor little Alfie Langer didn’t get a look in here.

Big Tino wins this one hands down. What a weapon, and he’s still growing!

Wow! That’s a combined weight of a VW Beetle in the second row. Coen Hess and Gavin Cooper are another couple of heavyweight contenders for the back row.

Not so much a pair of bookends but a couple of absolute immovable bollards. Some other heavyweight front rowers worth a mention are Arthur Beetson, Sam Backo, Andrew Gee, Carl Webb, Peter Civoniciva, Darryl Brohman and Neil Tierney. Seems that Queensland always had more than their fair share of big boppers.

A lot more solid and built much closer to the ground tan twin brother Kevvie.

So there they are, 1.415 tonnes of cane toad. Are there any big Maroon boppers missing from this list?

Next will be a list of NSW heavyweights to take on this line up of prime Queensland beef.