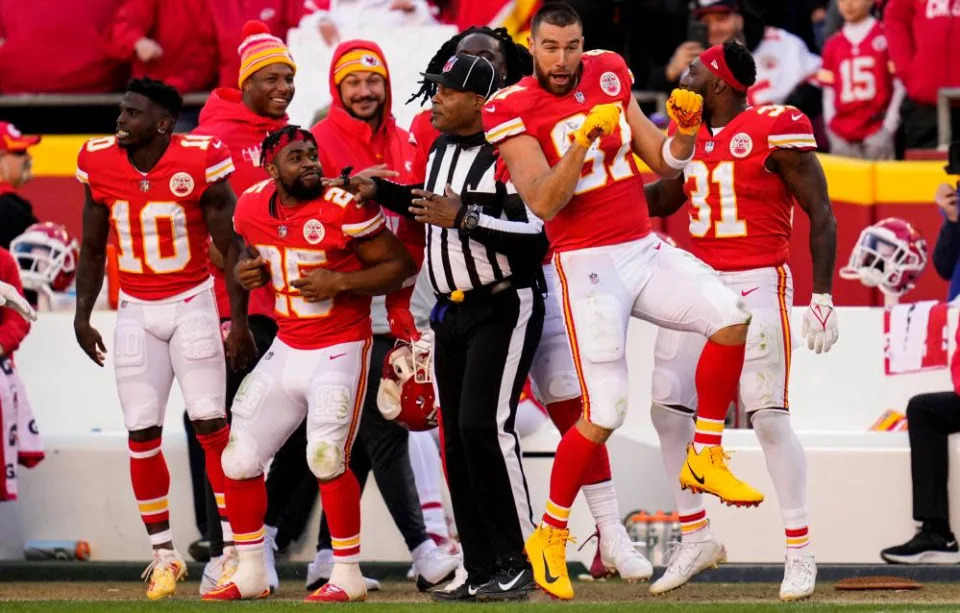 It’s hard to imagine what motivated the Las Vegas Raiders to prance to the middle of Arrowhead Stadium and stomp on the Chiefs’ logo during pregame warmups. “You don’t want people coming into your stadium and disrespecting what you’ve built,” Patrick Mahomes would later say.

There is no official rule against what the Raiders did but there are also things called etiquette and common sense. And as the Raiders quickly learned Sunday, there’s another thing called karma. Seventeen seconds into the game it was the Chiefs who were dancing after defensive tackle Jarran Reed caused a Josh Jacobs fumble, which cornerback Mike Hughes took to the house for the first of what felt like a million points for Chiefs. Twenty-one minutes later it was 28-0 Chiefs. The final score was 48-9. It was an embarrassment on all levels for Las Vegas. The Raiders’ little pregame ritual certainly didn’t help matters.

Raiders linebacker KJ Wright admitted so after the game. “I would have been upset, too, if I was them,” Wright said. “Anybody that comes there and do that? And they definitely came out and responded to their anger and we couldn’t hold up.

“It was spur of the moment. One guy said, ‘Let’s go’ and we all got to ride together. We all went out there together. We did it as a team and just gave them a little more motivation than we needed to give them.”

The Chiefs defense was once again dominant. The midseason addition of defensive end Melvin Ingram and the return of Chris Jones to the inside has turned the line into a juggernaut and ignited the entire defense. The dynamic duo were integral in keeping Derek Carr at bay and at one point they combined to turn the poor Raiders quarterback into a hamburger patty. Sunday’s walloping of the Raiders marked the third game in a row that they have only allowed nine points. In the first seven games of the season, the Chiefs allowed 29 points a game. In the last six, they’ve allowed just 10.8.

Meanwhile, Mahomes is back to looking like his generational self. The Chiefs scored on seven straight possessions. Mahomes, who finished with 258 yards, two touchdowns and no turnovers, put out on a clinic at all depths and degrees of difficulties. And he even unwrapped a new toy in wideout Josh Gordon, who scored one of Kansas City’s gazillion touchdowns.

Elsewhere, the Dallas Cowboys almost suffered a similar result to the Raiders after their strange displays of bravado. First, head coach Mike McCarthy handed Washington bulletin board material when during the week he promised a Cowboys win. “We’re going to win this game. I’m confident in that,” he told reporters.

Dallas’ psychological warfare took a much stranger turn Sunday morning when it emerged Cowboys owner Jerry Jones had flown in team-branded sideline benches to be placed at Washington’s FedEx Field. There is no rule prohibiting this – visiting teams largely control their own sideline equipment. But the optics were clear it was audacious and all Jones.

The Cowboys won but McCarthy’s speech and Jones’s redecorating may have given Washington a spur when they found themselves 24-0 down at halftime. They came back with vengeance in the second-half but Dallas hung on to win 27-20.

They’ve also let the rest of the league know they are comfortable bending the game’s unwritten rules. Unfortunately for them, there are a lot of strong NFC teams that will be happy to finish the job that Washington could not.
MVP of the week

Justin Herbert, QB, Los Angeles Chargers. There have been plenty of descriptions of Herbert since he burst on to the scene last season. Beast. Freak. Superhuman. All of the sentiment was captured in one monstrous throw on Sunday. That pass stole the show but he was nearly flawless in a 37-21 win over the Giants. His 275 yards and three touchdowns led the Chargers to a second-straight win.

It was a crucial victory that keeps the Chargers in the mix with the Chiefs in the AFC West. And luckily for the NFL world, the two teams meet this week on Thursday Night Football. The Chiefs defense will present a much tougher test than the Giants but Herbert is rolling and should have wideout Keenan Allen return from the Covid-19 list.

It was an emotional scene in Denver as the Broncos paid tribute to Demaryius Thomas, their beloved former star wideout who unexpectedly died at age 33 last week. Thomas’s 88 was everywhere: on fans’ jerseys, etched on players’ helmets and painted on the sidelines.
Stat of the week

The 107th win when ahead by three touchdowns wasn’t as easy as most of the rest. After Brady’s Bucs took a 24-3 lead into halftime, the Bills adjusted, figuring out ways to make up for their struggling offensive line. The result was a 27-27 tie at the end of regulation. But then Brady went into Hall of Fame mode, taking the field with that ruthless look in his eyes. A minute later he hit Breshad Perriman on a 58-yard game winner. Another crazy stat from this game: the Bills did not hand off to a running back once in the first half. Clearly that didn’t work out very well for them, although quarterback Josh Allen did rush for more than 100 yards for the game.
Quote of the week

“You’re not supposed to reach the ball for the pylon, but nobody said anything because I scored” – San Francisco 49ers wide receiver Brandon Aiyuk.

Aiyuk won the game for the 49ers against the Bengals in overtime 26-23 with an incredible stretch in which he was first called down at the one. Upon replay, the officials reversed it to the game-winning walkoff when it was evident that his feet and all other parts of his body stayed inbounds as he dove for the pylon. It’s the type of risky play that too often results in a fumble.

It was a fitting moment for Aiyuk, who spent most of the season’s first-half strangely excluded from the offense but has now paired with Deebo Samuel to give Jimmy Garoppolo two alpha receiver-running-back-do-it-all options.
Elsewhere around the league

— Watch out for those scrappy Cleveland Browns, who pulled out a 24-22 win over the Baltimore Ravens. The Browns were aided by Lamar Jackson’s exit – he was carted off with an ankle injury in the second quarter. But Cleveland were monstrous on defense in the first half, smothering Jackson, and then his backup Tyler Huntley. Myles Garrett collected yet another sack, putting his season total at 15.

— Reports say that Aaron Rodgers will have to deal with his toe injury for the rest of the season. It doesn’t seem to be doing him much harm. He threw four touchdowns – and continues to own the Bears – as Green Bay beat their divisional rivals 45-30 on Sunday Night Football.

— The aforementioned Bills find themselves as the final seed in the AFC playoff race (for now) and two games behind the division leading New England Patriots. Sunday’s game was supposed to be a massive test in how they would respond from the all-rushing-all-the-time coaching masterpiece Bill Belichick used to bury them in Week 13. Now they must bounce back from losing an emotional game that was within reach against the game’s greatest quarterback. The next test comes in Week 15 against the Panthers. Time to stop the bleeding, Sean McDermott.

— If Urban Meyer truly deems himself a winner, while calling his assistants losers, as was reported Saturday, he ought to be examined for short-term memory loss. The Meyer-led Jaguars lost to Tennessee 20-0 and dropped their fifth-straight game. Jacksonville again played a sloppy, too conservative brand of football. Trevor Lawrence threw four interceptions. The Jags are now 2-11, and are a laughing stock. There are many reasons to wait until the regular season ends to bid farewell to a failing coach. And sometimes clubs wait out of respect for a long-serving coach. But out of respect to the players and city of Jacksonville, it’s time to pull the plug on the failed Meyer experiment now. There is too much toxicity in the building among players and Meyer and coaches and Meyer, and presumably some between ownership and Meyer. Between the losing and friction, a fresh face is Jacksonville’s only chance to end the season with some sense of positivity.

— It was a win-win day for the Titans. They shut out the Jags (their first home shutout since 2000) and remain entrenched atop the AFC South. More importantly, star running back Derrick Henry is reportedly on track to return for the playoffs. Henry broke his foot in Week 8 against the Colts. He has rushed for over 150 yards in three of his six playoff games.