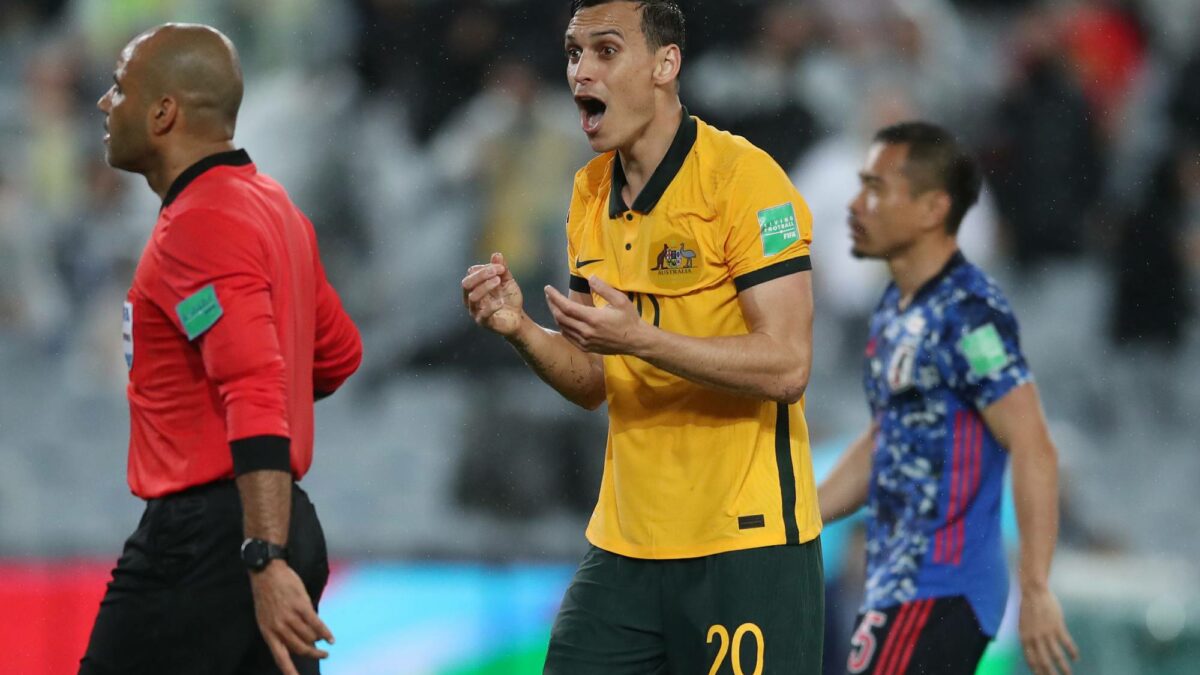 It was as predictable as the Sydney rain – less than 24 hours after Australia’s 0-2 defeat to Japan, the rumours were gathering force that Graham Arnold would be removed from the coach’s job before the third-place playoff in June.

On a wet night and a heavy pitch, the Socceroos held Japan at bay for 89 minutes before succumbing to two late goals from substitute Kaoru Mitoma, which confirmed that if Australia wants to make a fifth successive World Cup finals, they’ll have to do it much the same way they did in 2018; through a play-off with the third-best team from the other Asian group, and then a final inter-confederation encounter.

This time around, though, that opponent is the fifth-best South American country – a significant step up from the 2017 playoff against Honduras.

And our ‘solution’ to this looming couple of crunch games is to sack the coach.

Ridiculous, yet totally unsurprising, from a game that seems to delight in tearing itself apart at every opportunity. And I say that as one of football’s passionate defenders, not someone who takes great delight in taking potshots at our beautiful game from the sanctity of a cashed-up-through-TV-rights rival code.

People with more insight than me have been warning of the stagnation in the game’s development for years, but they are waved away as embittered or “old school”. We are a game that seems to want to ignore its history – that it is something to be hidden rather than celebrated, so when knowledgeable figures with a long involvement in football raise alarms as to its state of wellbeing, they are ignored rather than embraced or listened to.

A former player and coach in the NSL, he has been around the game at the highest level long enough to understand that it is a results-driven business. He has repeatedly warned that our young players were not receiving the same playing opportunities as they did in previous generations, exhorting the need for a full National Youth League and lower division.

If those opportunities are not there, there is no emerging quality, and the results become harder to achieve.

With ten players unavailable due to injury and COVID, the talent pool was as shallow as it has been in years. The players who came in may well be stars of the future, but that ‘future’ came crashing into present-day realities in a game of major importance.

Yet, somehow, the first reaction is to blame Arnold for it all, as if he single-handedly wrote the curriculum, set up the non-functioning youth pathways, endorsed the thousands of dollars young players are charged to play in youth competitions, and set up the myriad of “academies” that now operate – some worthwhile, some absolutely not – advertising themselves as the key to the promised land of European contracts.

The issues will not be addressed with a knee-jerk quick fix, which is why it will almost certainly happen. Our most famous quick fix worked once, back in 2005, with a coach called Guus Hiddink – you might remember that name – so why would we not want to try and pull that particular rabbit out of our hats again?

Well, let’s leave aside the fact that Guus Hiddinks are pretty thin on the ground these days and instead concentrate on the proposal – if it does come to fruition – that FA will be looking for a coach for potentially one game, and no more than two. That’s the quickest fix any national association could attempt.

A few names have been mentioned but one which is extraordinary is former “quick fix” Socceroos coach Bert van Marwijk. The Dutchman’s most recent employer was the United Arab Emirates, who sacked him in February.

UAE loomed as the most likely nation to claim third place in Asia’s Group A, but defeat to Iraq earlier in the week has changed all that. While Group B’s final round games have no bearing on third place, in Group A, UAE are in danger of missing out altogether, with the daunting prospect of having to beat first-placed South Korea, while Iraq, only a point behind, play bottom-of-the-table Syria.

In essence, one of Arnold’s mooted replacements is a coach not deemed good enough by a nation who may finish out of the top three, worse off than the Socceroos themselves. Ironically, it was Arnold who took over from van Marwijk after the latter had hardly distinguished himself as Australia failed to win a game or score a goal from open play in their World Cup group in Russia 2018.

If Football Australia do pull the plug on Arnold’s coaching tenure, they will simply be handing the same, patched-up, leaking, listing ship to a new skipper, who will have even less time to scrape off the barnacles of a decade of neglect.

It was a weary-looking coach who addressed the press after Thursday night’s game where the very issue was raised. A journalist asked, in relation to Australia’s player development, how we compared to other Asian nations when “…we’re bringing on youngsters like Folami and Tilio and they’re bringing on Haraguchi and Mitoma?”

After a pause, Arnold’s response was significant. “If you notice that, write what you think. I’ve been saying this for probably ten years.”

Such is the quadrennial focus now on achieving World Cup qualification and the associated financial windfall, that the development pipeline has been repeatedly ignored. There are a thousand different viewpoints on how to fix this, but ultimately the lack of chances for young players is mortgaging the future and leaving the debt with the figure at the top.

Add to this the circumstances under which Arnold has operated during the global pandemic, with “home” games in the Middle East, changing quarantine and isolation rules across the world, playing in empty stadiums, all of which eventually culminated in the perfect storm of disasters in the week leading up to last Thursday’s qualifier.

There was criticism of Arnold’s tactics and substitutions in the game, a feeling that the Socceroos did nothing to get in behind the Japanese defence, that transition through midfield was slow and easily cut out by Japan, that maybe Marco Tilio should have been introduced earlier.

But that is taking Thursday night’s game in isolation while ignoring the circumstances that led to its inevitable watershed.

Just to emphasise the unpredictability of world football, unlike Italy, the Socceroos still have a chance at World Cup qualification. But if that qualification comes at the expense of a thorough overhaul of player development, I’d hazard a guess that any passionate contributor to the Australian game might almost find it worthwhile giving Qatar a miss, even Arnold himself.

Of course, we could have both, but one seems to always blind our administrators for the need of the other.