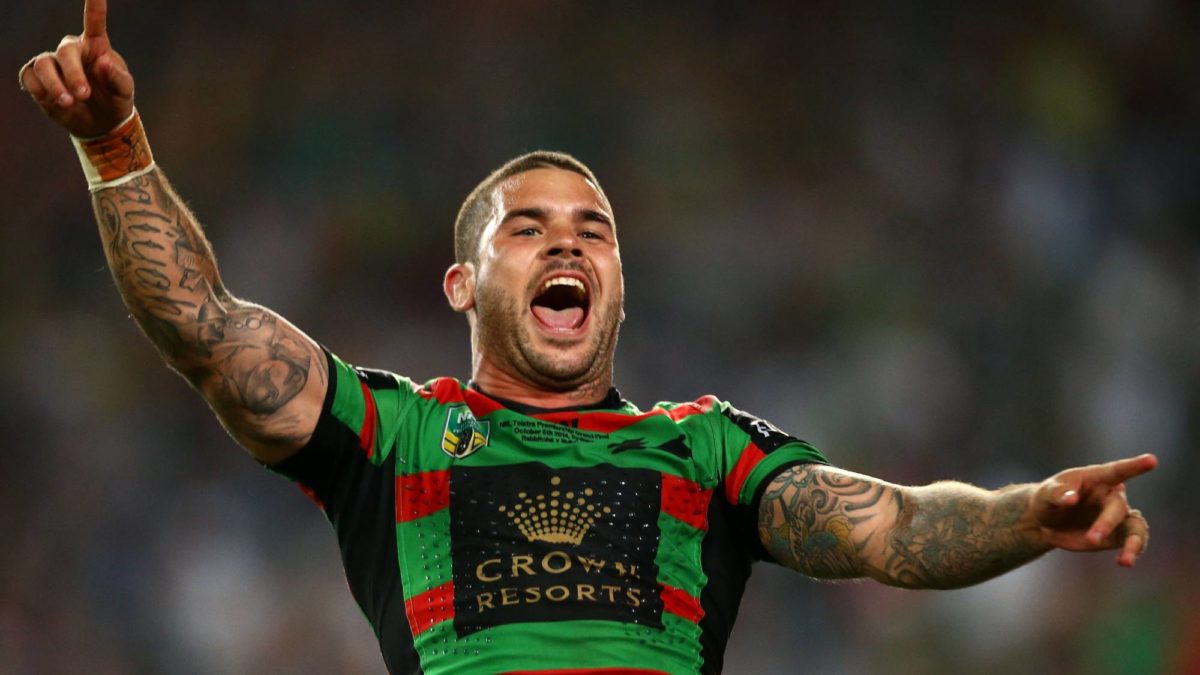 It’s been seven years since the South Sydney Rabbitohs were last champions. Sunday’s Grand Final will be only their second decider in 50 years .. so for Souths these chances don’t come around all that often.

The Bunnies have three survivors from their brutal 30-6 triumph over the Canterbury Bulldogs in the 2014 Grand Final, a showdown forever remembered for Sam Burgess playing on after smashing his cheekbone in the opening hit-up.

Adam Reynolds, Alex Johnston and Tom Burgess were on the field as the Rabbitohs broke a 43-year club record to lift their 21st premiership trophy, Hopes were high of quickly adding more silverware, yet it’s taken seven more frustrating years to get to another crack at the ‘Big Dance.’ 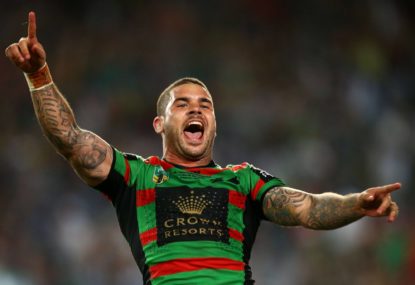 The Rabbitohs had to endure the heartbreak of three consecutive years of preliminary final defeats – Roosters 2018, Canberra (2019) and Penrith last year – before turning over the Manly Sea Eagles comprehensively last week to give them another title shot.

Johnston was just 19 and in his debut season with the Bunnies when he played in his first Grand Final. He scored a try midway through the first half off a sweet Luke Keary pass .. he’s been scoring tries ever since.

AJ has been in phenomenal try-scoring form – 135 tries in 165 appearances in the Cardinal and Myrtle- and an astonishing 29 in 21 appearances this season. He has been scoring tries for fun on the end of Souths weaponised left attacking edge.

Johnston, who was on the verge of having to find another club last season because of salary cap pressures before taking less money and signing a two-year contract extension, well knows that Grand Finals don’t come along every year.

“I love the club and I just feel very lucky that I got to a situation where I could stay,” Johnston said this week.

“Signing with Souths for the last couple of years has been one of the best decisions, for myself personally and for my family. And now to make the Grand Final is the cherry on top.”

Tom Burgess – the 29-year-old twin brother of George and the youngest of the four Burgess boys – was on the interchange bench in the 2014 Grand Final and is likely to be used off the bench by Wayne Bennett again as an impact player on Sunday.

He was the junior member of the Burgess quartet and was part of rugby league history the previous season when all four of the brothers played for Souths against the Wests Tigers.

It was the first time in 103 years that four brothers had played together at the top level of rugby league.

“It’s definitely different [the second time around].” Big T said ahead of Sunday’s decider.
“I’m at a different stage in my life with my career, I’ve got two kids now, I’ve got a partner, and you share it with those people. If you look back to 2014, I was a young 22-year-old lad.”

Burgess is more than happy to bide his time on the interchange bench this weekend and wait for Bennett to sool him into action.

“There was a spot there for me to be able to come off the bench and bring that impact off the bench, and I was happy to do that for the team,” he said.

It will be bitter-sweet occasion for Adam Reynolds. This will be his 231st and farewell match for his boyhood club before he leaves for the Brisbane Broncos in a move that has wrenched the Burrow faithful.

“I’ve got a bigger task at hand. Obviously, I want to win this game, that’s the most important thing at the moment – then we’ll worry about the rest after that,” Reynolds said of his final match for the Bunnies.

Reynolds has been an ever-present with the Rabbitohs since his 2012 season debut and has become the club’s all-time leading points scorer – 38 tries, 858 goals, 1,892 points.

He forms a lethal halves partnership with Cody Walker and his general kicking is a feature of Wayne Bennett’s tactical game plan.

But there is a bit of cat and mouse going on over a groin injury that Reynolds developed in the leadup to last week’s win over Manly when he left the goal-kicks – his forte – to rookie Blake Taaffe. Whether that will be the position again this weekend we’ll have to wait and see.

Much has changed for South Sydney in the intervening years after their rip-roaring win over the Bulldogs.

Much back in those days revolved around their marquee men Sam Burgess and Greg Inglis, who both played decisive roles in the victory.

Sam Burgess typified the grit and raw courage of the South Sydney fighting spirit when he battled on after a ferocious head-on collision with fellow English hard man James Graham in the very first tackle of the match.

It had all the semblance of the legendary John Sattler in South Sydney folklore, who also played on after an early king-hit fractured his jaw against Manly in the 1970 Grand Final. The resonance was compelling as Burgess refused to quit following his fearsome collision with Graham.

“As I was running my face was bouncing up and down and I could feel my face and then it became all numb and tingling and it was quite uncomfortable,” Burgess has recalled.

“I just thought it was my last game because I was going to rugby union and I just thought next time we get the ball I will take a carry and see how it feels.”

Sattler was in awe of Slamming Sammy’s courage under fire.

“It’s just wonderful stuff, a great win,” Sattler said back then. “The big fellow [Burgess] blew them out of water. He copped a hit to the eye but he’s played through and come through and I wish him all the best. It’s just absolutely marvellous.

“His performance tonight and all through the season has been of the highest magnitude. He’s what South Sydney is all about.”

Other evocative memories from the 2014 Grand Final were the majestic form of Greg Inglis at fullback and George Burgess ‘get-out-of-my-way rhino charge to score under the bar at a pivotal time in the contest midway through the second half.

Inglis helped deliver the victory, kicking for Kirisome Auva’a to score six minutes from the end and sealing it with his trademark ‘Goanna’ try in the final minute.

Souths had lost five times to the Panthers before their upset 16-10 win in Townsville in the opening week of the finals and now with Melbourne Storm out of the way they have their chance to claim an unprecedented 22 premierships.

It could also be a fitting postscript for the remarkable Wayne Bennett. The 71-year-old coaching guru is into his 10th Grand Final – six wins with Brisbane Broncos and one with St George Illawarra Dragons – and every chance of landing his eighth premiership in his final year with the Bunnies.