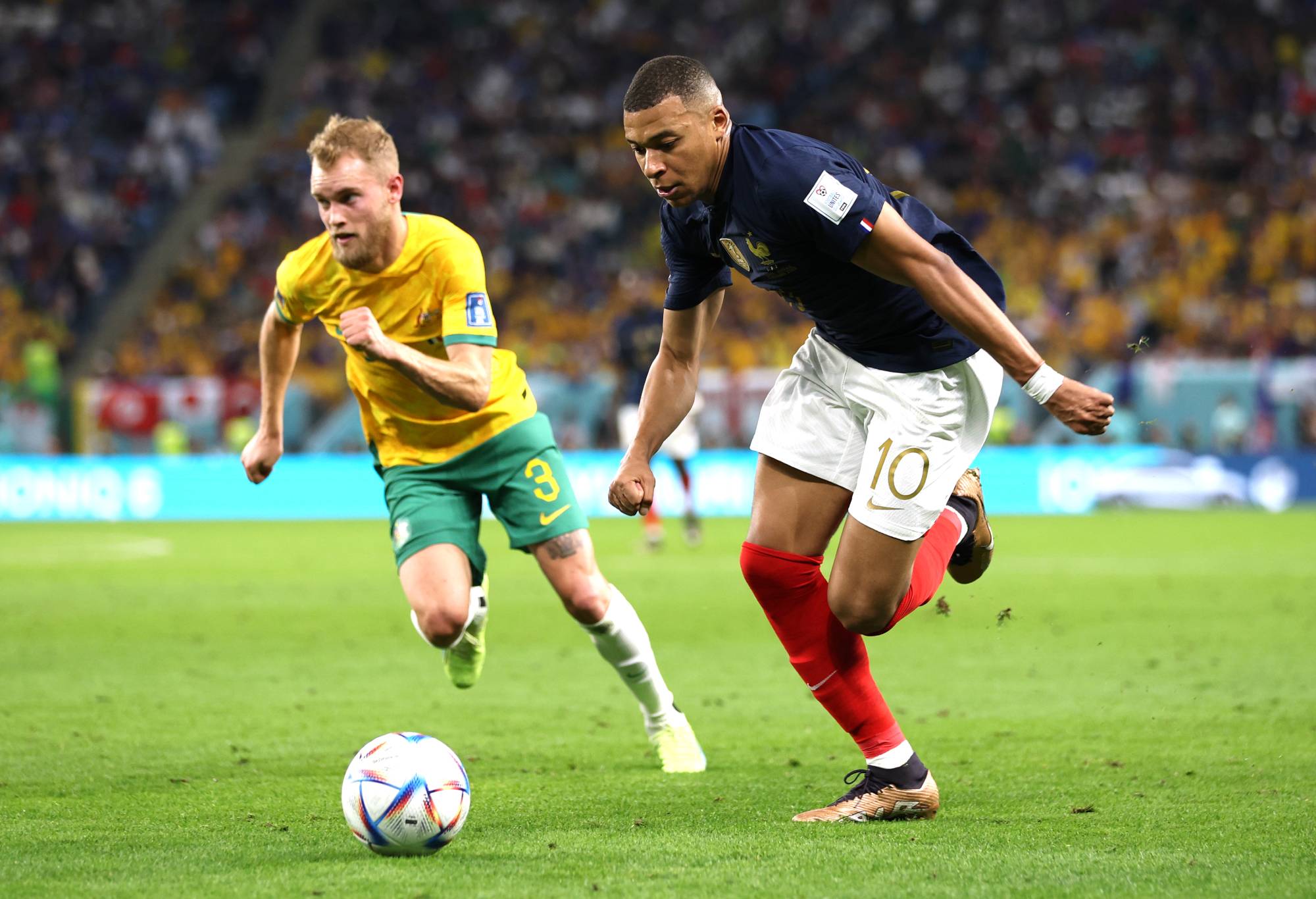 Nathaniel Atkinson has vowed not to be haunted by a World Cup dream which turned into a nightmare.

The 23-year-old right-back, in his sixth game for the Socceroos, was pitted against French marvel Kylian Mbappe in Wednesday’s Group D clash.

“It’s an eye-opener,” Atkinson told reporters after being torched by the flashy Frenchman.

Atkinson, valued at around $1m, joined Scotland’s Heart of Midlothian from A-Leaguers Melbourne City this year.

And he admits he has joined a long list of players around the globe to be exposed by Paris Saint-Germain superstar Mbappe.

Atkinson coughed up possession with a leaden touch which led to France’s second goal in their 4-1 rout of the Socceroos.

“I have played that scenario 50 times over and I could probably come up with 50 different solutions,” he said.

“But that’s football. I am disappointed. I take full responsibility for the second goal.

“And it’s time to move on from that, because I have got a game in three days to fix it.”

Mbappe scored one goal, set up another and had seven shots against the Socceroos.

He also had 19 touches in Australia’s box – the highest by an individual player at a World Cup in 52 years.

“It’s just the physicality of the guy,” Atkinson said.

“The pace – it’s not hidden how quick that guy is. Give him one step and he’s gone.

“As a team you can always come up with a plan but sometimes if it’s one v one, he gets the better of you.

“There’s a reason why he’s in the top three players in the world.

“But I don’t want to use that as an excuse. I want to verse the top players in the world.”

“When I got into the change room, my head was down,” he said.

“But the first people that came up to me were the experienced players who talked about their experiences.

“And they said the beauty is, in three days time we have got another game.

“The beauty of the tournament is you can’t dwell on it because we have got another game to fix it in three days.”

Meanwhile, Garang Kuol, the youngest Socceroo to play at a World Cup, was stunned by the physicality of the French.

Kuol, at 18 years and 68 days, set the new age landmark when coming off the bench late on Wednesday.

And there he was on Al Janoub Stadium in Doha, trying to chase down French players.

“You can see six foot four (inches) people that are as quick as me,” Kuol said of the defending champions.

“That shows you the big difference between me and some of those players and how I have got to reach that level.

“The boys were just chasing France around.”

Kuol came on in the 73rd minute, just after Les Bleus scored their last goal in a 4-1 hammering of the Socceroos.

“Going into the game I was just excited to go on to the pitch,” he said.

“And when the option came, I just wanted to get on the ball.

“We have to get ourselves to that level.”

And Socceroos goal scorer Craig Goodwin said the defeat took some gloss of his polished finish.

“Putting on the Australian jersey is an honourable moment at any time,” Goodwin told reporters.

“But to be at the World Cup, to play against the reigning champions, and to score to take the lead was an incredible moment. 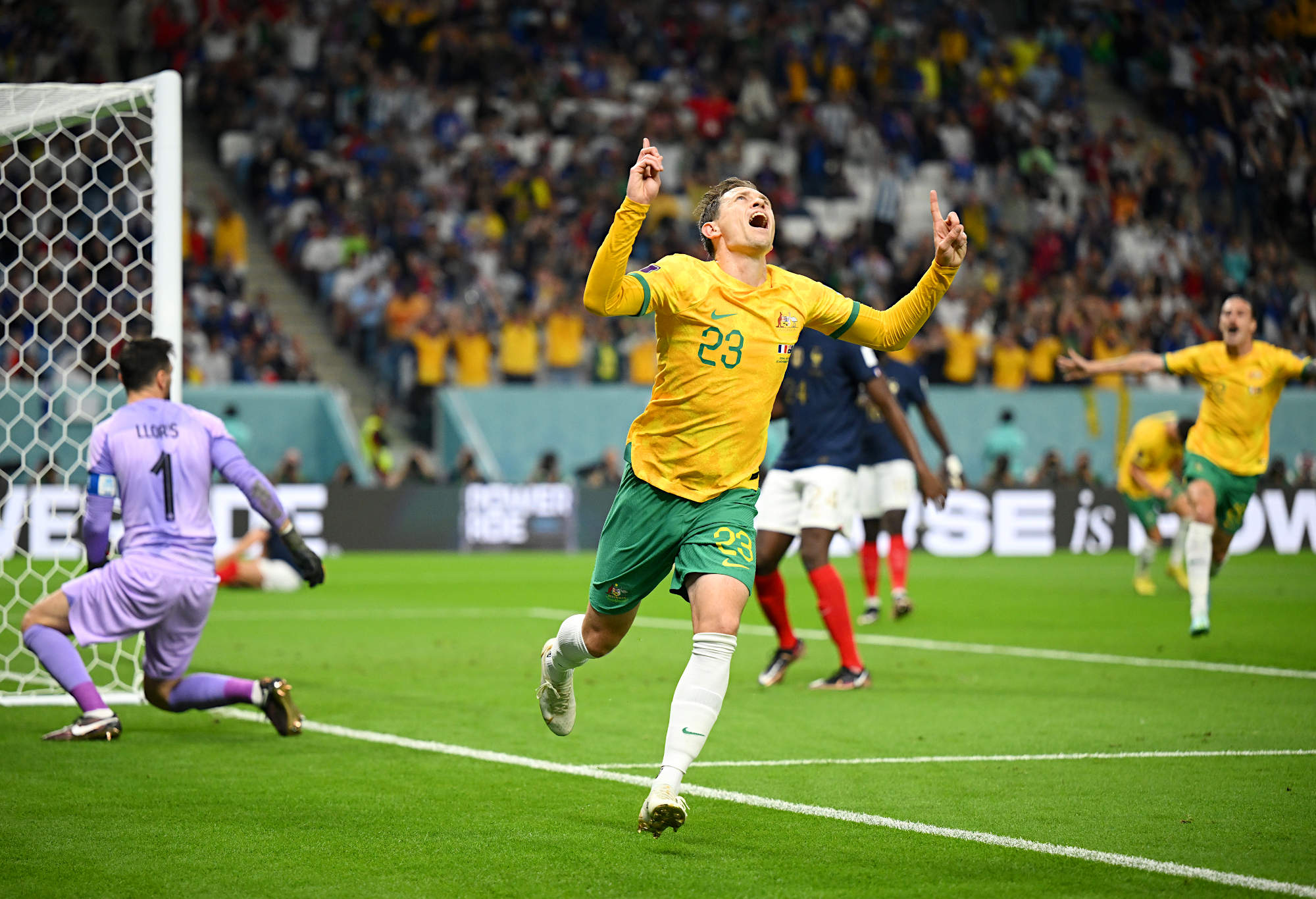 “It’s something that I will cherish for the rest of the my life.

“But in the end, a little bit of disappointment because we lose the game.”

Goodwin said the Australians, fortunately, had little time to dwell on the hammering from France.

They meet Tunisia on Saturday (9pm AEDT), before a last Group D game against Denmark next Thursday (2am AEDT).

Those two nations drew 0-0 in their cup opener, a result which favoured Australia.

“We have to look forward to the Tunisia game, we have to go in with full confidence,” Goodwin said.

“The group is wide open.

“And we have the belief in this group that we can do something special.”