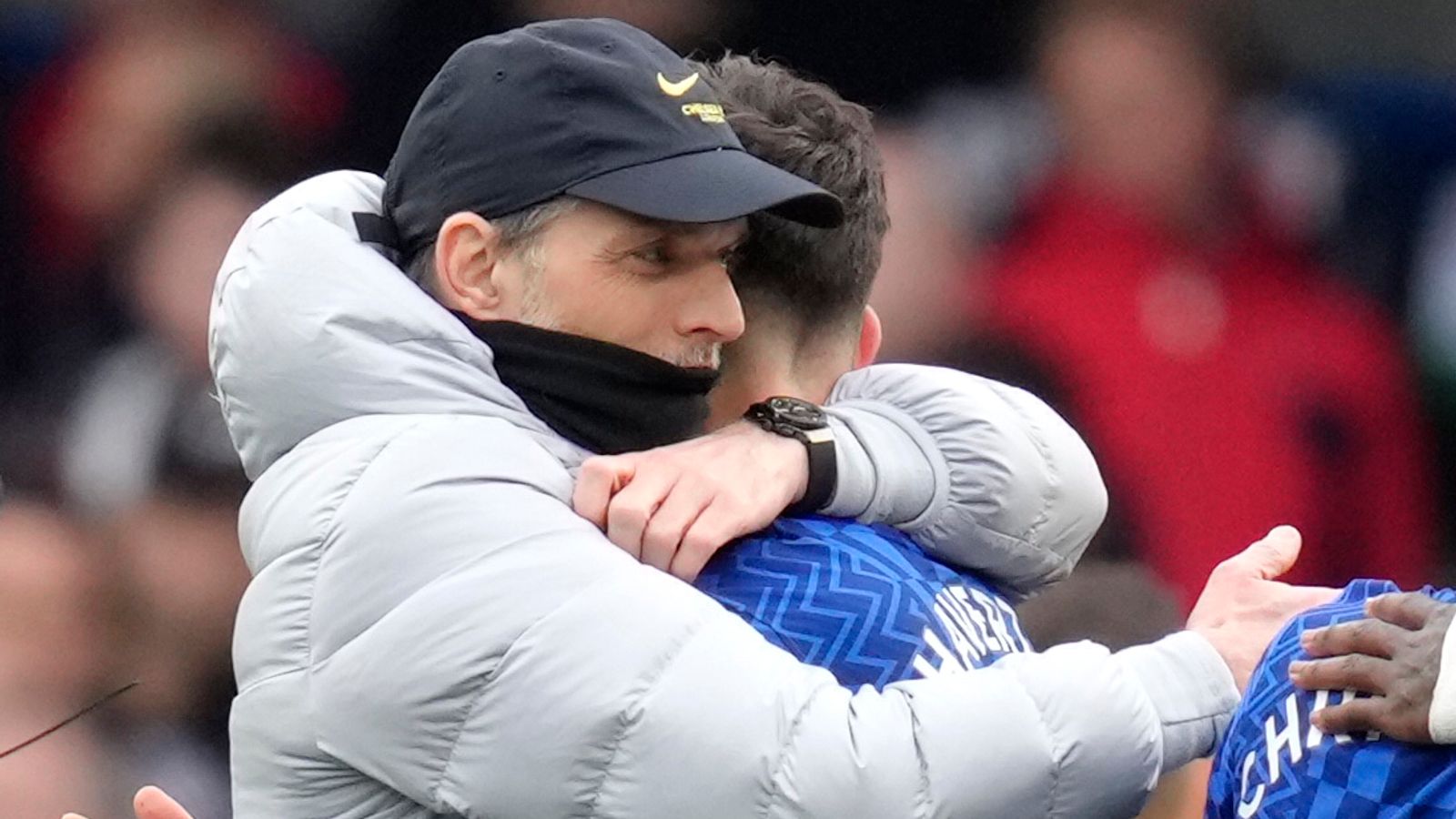 Thomas Tuchel reaffirmed his commitment to Chelsea after his side’s 1-0 win over Newcastle – and even offered to drive his players to Lille for Wednesday’s Champions League tie.

At the end of a dramatic week for the club, which saw owner Roman Abramovich sanctioned by the UK government on Thursday and then struck off as a director by the Premier League on Saturday, Chelsea grabbed a last-gasp win over Newcastle, with Kai Havertz brilliantly converting in the 89th minute.

Despite all the off-field concerns and distractions, Chelsea have now won five in a row in the Premier League to strengthen their hold on third.

Tuchel was asked about his future in his post-match press conference and, after insisting he would remain with the club, he explained how a day-by-day approach is allowing his coaching staff and players to focus on their performances.

“For sure, there’s no doubt I stay until the end of the season,” he said. “Absolutely.

FREE TO WATCH: Highlights from Chelsea’s win over Newcastle in the Premier League.

“We have to wait day by day because everything can change but the situation is clear: the club is for sale and hopefully it will go through to sort things out and give us some perspective. It’s pure speculation and I have no further information than you already have.

“Day by day is a good way to live your life and now we’re forced to do it because there are circumstances we can’t influence. In some ways, that’s not so nice but it gives you the freedom to focus on the things you can influence, which is our performances and show the spirit.

“The focus is on the first team – but Chelsea is much more than the first team in the Premier League. It’s a massive club with huge tradition and hundreds and hundreds of people and for them it’s important we show the spirit, give them a distraction and show them what we’re about.”

Tuchel added that his role has hardly changed during this situation, thanks to the work of the staff at the club. “What makes Chelsea special is the quality and commitment of the support from everybody in our building,” he said.

That includes the travel planners, who are working to new, strict budgets for away trips, set by the government as part of the club’s restrictions. However, Tuchel says whatever happens, he and his players will be in Lille on Wednesday for their Champions League last-16 tie.

“If you asked me 20 years, 30 years ago if I’d join a Champions League match at the sideline and what I’m willing to do, I’d say ‘where do I have to be when?’ We will be there.

“Of course organisation-wise there are some negotiations but we have brilliant guys who organise the travels and in every department there are such committed people so things in the moment feel quite normal.”

Reflecting on the situation he and his players are in, Tuchel says he feels a responsibility to his colleagues at the club.

“We cannot influence the situation and we are also not responsible for the situation,” he said. “But at some point it’s our responsibility – because we are in the spotlight and we have these games – every employee of Chelsea.

“There are a lot of people which I see on a daily basis who work for decades and are not so famous and are worried for the pretty close future if things will be alright for them.

“It’s important to have the attitude right and to focus and see the responsibility, what it means to these people. And if it’s just for 90 minutes…

“When we played football during Corona we could not cure the virus but we were there to give some hope, that they feel joy, excitement and this is also entertainment. This is what we do now. The matter is very serious of course.

“The Havertz goal was exceptional. Of course, we were a bit lucky today and we had a hard time on the pitch because Newcastle were physical, it was difficult to create chances and accelerate the game in the last 30 metres but it was important not to concede and to have the chance with maybe one quality run, pass and finish to win it and full credit because we did. We defended very well. The distraction level was not the biggest part today.”