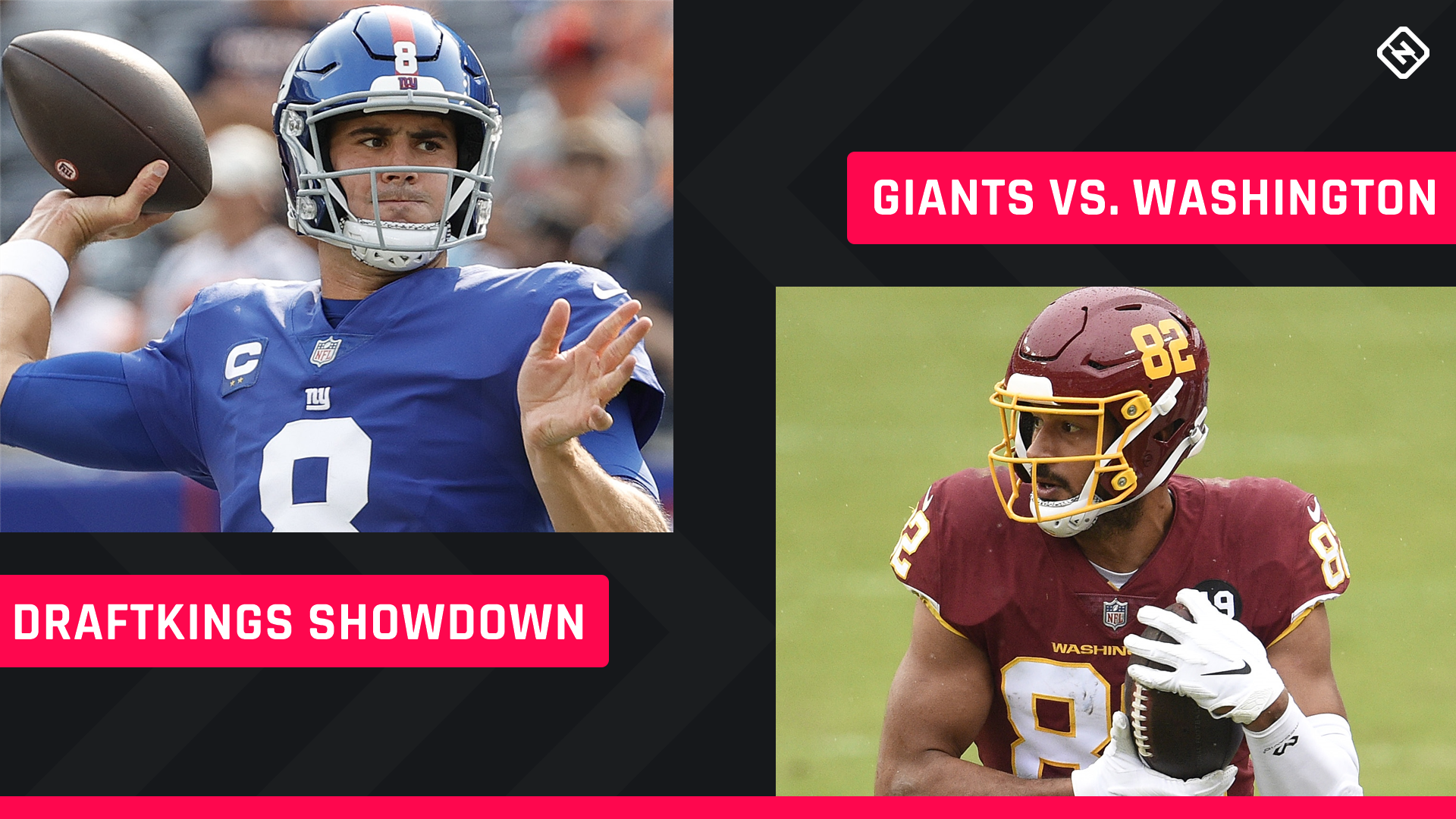 Week 2 of the NFL season kicks off with an NFC East duel between the Giants and Washington Football Team on Thursday Night Football. The matchup from a daily fantasy football perspective is about as exciting as a trip to the DMV, but there’s a lot at stake for both teams. It’s tough to call any contest this early in the season a “must-win” (thought every contest is a “must-win” for those who play NFL DFS!), but considering the consequences facing the loser, it’s fair to expect an increased degree of urgency from both sidelines, which could help people in DraftKings Showdown tournaments.

One doesn’t need a PhD in football analytics to anticipate a low-scoring affair, but the fact that Vegas sportsbooks listed this contest with opening totals as low as 41 gives us more reason to do so. Finally, with Washington laying points as the favorite, we’re going to lean their way this week. This won’t be an uncommon approach, but we’re not looking to be too cute this week.

As always, we like to remind everyone of the key scoring quirks on DraftKings. It’s full-point PPR, and there are three-point bonuses for 300 passing yards, 100 rushing yards, and 100 receiving yards. A player’s price is multiplied by 1.5 if you pick him as your Captain, but his point total is also multiplied by 1.5.

MORE DK SHOWDOWN: How to win a Showdown contest

Gibson handled 23 touches in Week 1, lending credence to the idea that he’d be utilized in a “Christian McCaffrey-type” of role. With so much involvement in the offense — and presumably first dibs at goal-to-go opportunities — Gibson is locked into our Captain slot this week.

Given the outlook for the Giants in this contest, we’d rather cast a net over their offensive output instead of trying to identify which pass-catcher will win the lottery. Until Saquon Barkley ($10,000) is 100 percent, it’s likely Jones will be asked to do a little extra — both on the ground and through the air. Jones ran for a score and added 27 rushing yards in Week 1, and that could be a trend we see continue throughout the early portion of the season.

McLaurin received just four targets, but perhaps much of that can be attributed to Ryan Fitzpatrick’s untimely hip injury. “Scary Terry” recorded 27.5 DraftKings points in a meeting with the Giants last season, so we know he can deliver a big DK score. Whether that happens again Thursday remains to be seen, but we’re going to bet on him receiving enough opportunity to deliver another one.

In two games last year, the Giants and Washington combined for seven offensive touchdowns and 82 points. Vegas is suggesting another low-scoring tilt, so we’re going to turn to the kicking game here. Hopkins averaged 8.5 fantasy points across those two matchups, and he could be called upon to put points on the board on a few more occasions Thursday.

Thomas received just three targets last Sunday, but he turned one into a touchdown. Target volume isn’t a concern for Thomas after he handled 110 last season, and by including him in lineups, we’re tying ourselves to the top three skill players on the favored Football Team. An alternate consideration is trying to position ourselves to capture WFT’s QB-led offensive production with Taylor Heinicke ($10,200). Like his counterpart, Heinicke can add a little with his legs — he rushed for 46 yards and a score in his playoff start against Tampa Bay last season. Heinicke’s inclusion would provide cover for most “rogue” touchdown connections.

The Week 1 stat line was nothing to write home about for the rookie (four targets, one catch), but he operated as the clear No. 2 receiver in terms of targets and snaps (93 percent). Given the players at our disposal in this matchup, it’s difficult to find someone who offers extensive playing time at this price. We’re operating under the assumption the Football Team will win. If you’d like a little more exposure to the Giants, you can opt for Kadarius Toney ($1,800) in this spot.