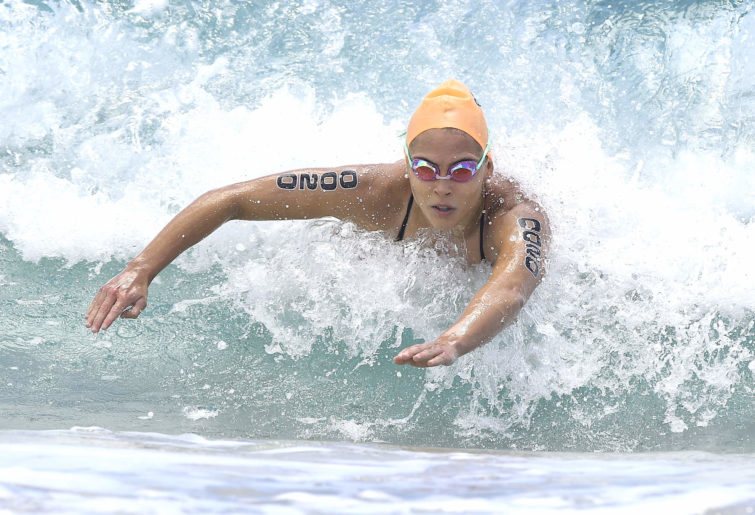 It’s fair to say that 19 year-old Tiarnee Massie is a superstitious person.

“I am very superstitious to the point where it is kind of stupid,” said Massie.

“It’s only now that I have learnt to chill out a little bit and that if I don’t have my favourite hair tie when I race, it’s okay.

“On race day, you can lose your cap or lose your goggles, so it’s something I have had to learn to deal with.”

Whilst letting go of superstitions might seem like something that Massie has just ‘grown out of’, perhaps there is more to this story.

Shes has been around surf lifesaving since she was a child. Her uncle was former Nutri-Grain IronMan Ashley Massie, and when Tiarnee reflects on her childhood, she thinks about the beach and the time she spent at her Surf Lifesaving Club.

“I started surf lifesaving when I was four years old, even though most kids start when they are six years old,” said Massie.

“As a kid I remember always being on the beach, in the water and at the Surf Lifesaving Club with my cousins.

“I loved netball and touch football growing up, too, but surf lifesaving always had my heart and deep down I knew that that was what I was going to do.”

This year, Massie has made her debut as a full-timer on the IronWoman series circuit.

But despite being so young, Massie has had several challenges to overcome.

In the past two seasons, Massie just missed out on earning an automatic spot in the series by the smallest of margins.

“Like any sport, the mental side of it is almost 90 per cent,” explains Massie.

“After missing out the first year, I had to work on the mental side of things because I felt like I stuffed the third race up.

“So instead of it being a case of ‘you aren’t good enough’, it was more that I thought I had ‘stuffed it up’.

“I was punishing myself.”

This year, Massie’s lead-in to qualification was interrupted by a bout of gastro. Leading into the race she had not eaten or drunk any liquid in several days. Quite incredible when you think about how physically demanding the IronWoman series is.

With sickness to deal with, it was hard to keep negative thoughts out of her head. Thoughts like, ‘why is this happening again?’, ‘I’m going to miss out,’ and ‘why does this keep happening to me’.

Despite her qualification time not being fast enough, Massie impressed the selectors on the opening day of the carnival and earned one of two wildcard places in the 20-strong field for this summer.

“I was so grateful for that spot,” she says.

“Once I got my foot in the Series and got my foot on the start line, there was nothing that was going to stop me.

“I was just so happy to be there and wanted to do everything I could to just enjoy it, because I have wanted it so long.”

Back to Massie’s superstitions.

It comes as no surprise that as Massie has suffered setbacks and learnt how to manage them, she is more able to accept when things are not going perfectly.

“Surf lifesaving is so unpredictable and everything in our sport is constantly changing,” says Massie.

“Nothing is ever the same and training is never the same; some days it is flat, then it is cold, then windy, then the air is dry or really humid.

“I have had to learn to adapt and to focus on the things that I can control and understand that the rest will be.”

Dealing with uncertainty is something Massie has become used to, particularly this season.

Ahead of the opening round of the Nutri Grain IronWoman series this weekend at Bondi Beach, she has had to deal with challenges as a result of the pandemic, including managing to arrive in Sydney safely.

But Massie is looking forward to the challenge of racing.

“Once I am there, on Bondi Beach and we are beginning to race, it will all be fine.

“With COVID, it has been a bit scary and uneasy, but I can’t wait to be back on Bondi beach this weekend.”