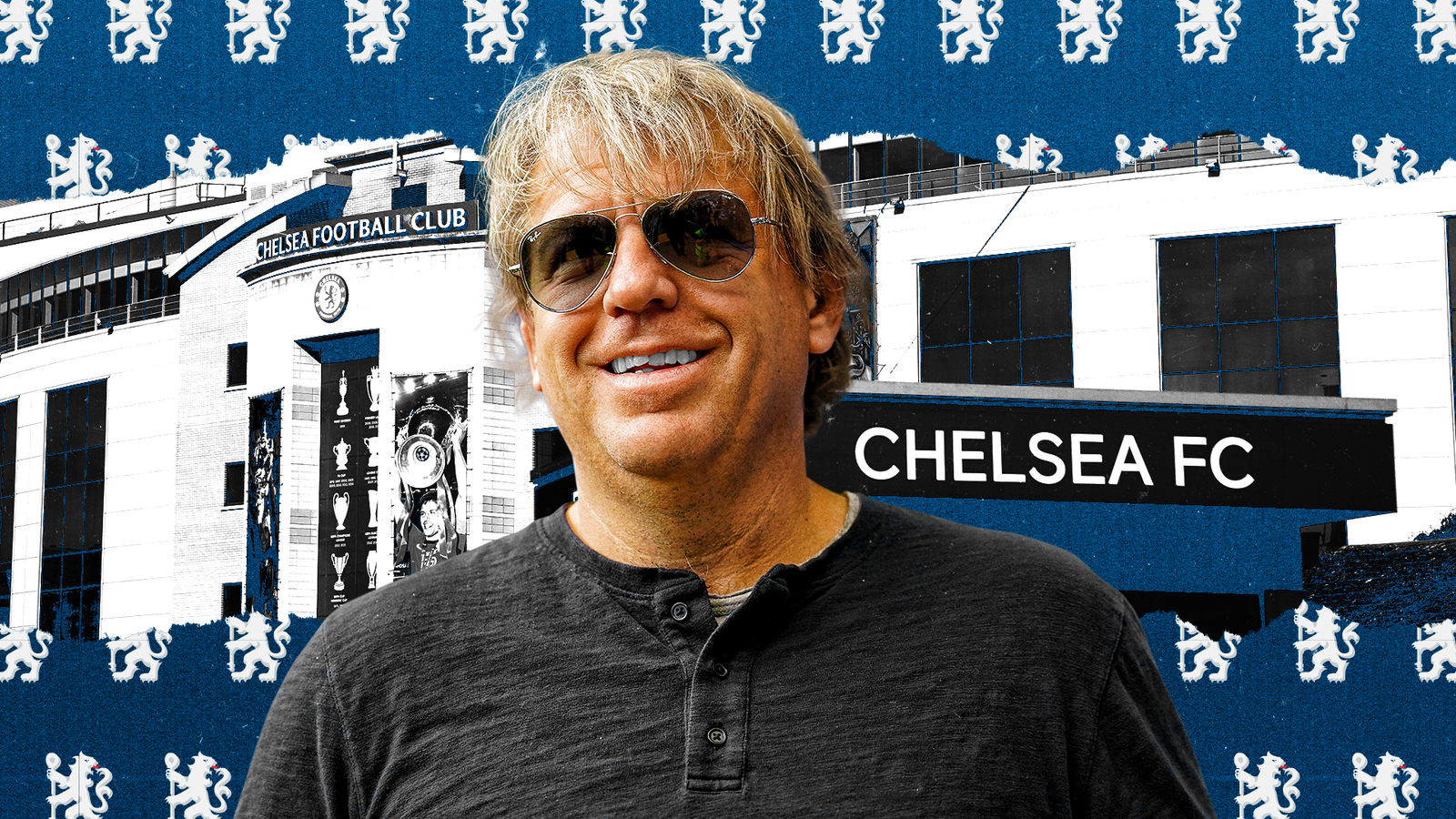 Deal is set to bring an end to Roman Abramovich’s 19-year ownership of Chelsea, in which the club has won 21 trophies including five Premier League titles and two Champions Leagues

The government has approved the £4.25bn Todd Boehly-led consortium takeover of Chelsea.
After months of negotiations, the deal has finally been approved after the government received legal guarantees that Roman Abramovich – who has had his UK assets frozen – will not benefit from the sale.
On Tuesday night, the Premier League approved the takeover, with its board applying “the Premier League’s Owners’ and Directors’ Test (OADT) to all prospective Directors” and undertaking “the necessary due diligence”.
Sky Sports News understands that the proceeds of the sale are going into a frozen bank account controlled by the government.
Russian-Israeli billionaire Abramovich put Chelsea, which he purchased in 2003, up for sale on March 2, a week after Vladimir Putin’s invasion of Ukraine on February 24.
Abramovich was sanctioned by the UK government but Chelsea were given a special license to continue to operate – albeit with restrictions over signing and selling players and offering new contracts to stars.
Boehly, co-owner of the LA Dodgers baseball team, and fellow consortium member Hansjörg Wyss were at Stamford Bridge for Sunday’s final 2-1 win over Watford.
US magnate Boehly will become Chelsea’s controlling owner once the takeover is complete, though California investment firm Clearlake Capital will assume the majority shareholding.
Timeline of Abramovich era

2003-2004
Abramovich bought the Premier League club from Ken Bates in 2003 for a reported £140m. The Russian arrived at Chelsea in June and went on a £100m spending spree in his first transfer window, bringing in the likes of Juan Sebastian Veron, Hernan Crespo and Claude Makelele.
Claudio Ranieri’s side finished second behind champions Arsenal in the Premier League and reached the semi-finals of the Champions League, before the Italian manager was dismissed at the end of the campaign.
2004-2007
Portuguese manager Jose Mourinho took over at Stamford Bridge after winning the Champions League with Porto in May and guided Chelsea to Premier League and League Cup success in his first season at the helm.
Chelsea retained the league title the following season, and added another League Cup as well as an FA Cup to their collection in 2006/07 but relinquished the league crown to Manchester United.
The Champions League remained out of Mourinho’s grasp during his time in London and he left the club in September 2007.

2007-2009
Avram Grant, who was appointed Chelsea’s director of football in July, succeeded Mourinho and took Chelsea to their first Champions League final in 2008 but departed after a trophy-less campaign.
Luiz Felipe Scolari arrived in London as a World Cup-winning manager with a glittering CV but was sacked after only seven months in charge, with Chelsea sitting fourth in the Premier League and in contention for the Champions League.
Russia coach Guus Hiddink was named interim manager until the end of the season as Chelsea went on to win the FA Cup and secured Champions League football with a third-placed finish in the Premier League.
2009-2012
Carlo Ancelotti was next through the door at Chelsea and led them to their only Premier League and FA Cup double in his first season in charge.
The Italian coach was unable to repeat his achievements the following campaign, however, as Chelsea finished second in the league and Ancelotti was sacked after a trophy-less 2010/11 season.
Andre Villas-Boas replaced Ancelotti after winning four trophies in the previous season with Porto but the Portuguese coach was dismissed nine months into the job, winning less than half of his games in charge.
2012-2013
Villas-Boas’ assistant and club legend Roberto Di Matteo was brought in to see out the rest of the 2011/12 season and led Chelsea to their first Champions League triumph when they beat Bayern Munich at their home stadium, the Allianz Arena.
Di Matteo was then named permanent manager but was sacked in November after Chelsea were eliminated from the Champions League and replaced by former Liverpool boss Rafa Benitez for the remainder of the campaign.
The move was unpopular with supporters but he delivered success in the form of Chelsea’s first Europa League trophy.
2013-16
Mourinho returned to Chelsea for a two-and-a-half year spell and won the club’s first Premier League title since 2010 in his second season in charge.

But a poor run of form in the 2015/16 season saw him dismissed in December after he lost the dressing room.
Hiddink stepped in again for a second time but could not salvage the season as Chelsea finished 10th in the league — their lowest placing in the Abramovich era.
2016-2019

Italy coach Antonio Conte arrived and he had an immediate impact at Chelsea, winning the Premier League title in his first season. He led the club to FA Cup success in 2017/18 but was sacked after Chelsea failed to finish in the top four.
Compatriot Maurizio Sarri took over and enjoyed a successful year in charge at Stamford Bridge, winning the Europa League and finishing third in the league, but left for Serie A side Juventus at the end of the season.
Club legend Frank Lampard returned to London and guided Chelsea, operating under a transfer embargo, to a fourth-placed finish in the league.
2020-2021
Chelsea spent £200m in the transfer window before the 2020/21 campaign as they looked to bridge the gap to Liverpool and Manchester City but Lampard was sacked in January with the team languishing in ninth.
After Thomas Tuchel took over, Chelsea edged out a top four finish and won their second Champions League title in May 2021. Tuchel’s first full season included UEFA Super Cup and Club World Cup success, while they are currently third in the league.
2022
Abramovich put Chelsea up for sale in March following Russia’s invasion of Ukraine before sanctions were imposed on the oligarch by the British government, effectively giving it control of the club.
The club is sold in May to a consortium led by Todd Boehly for £4.25bn.