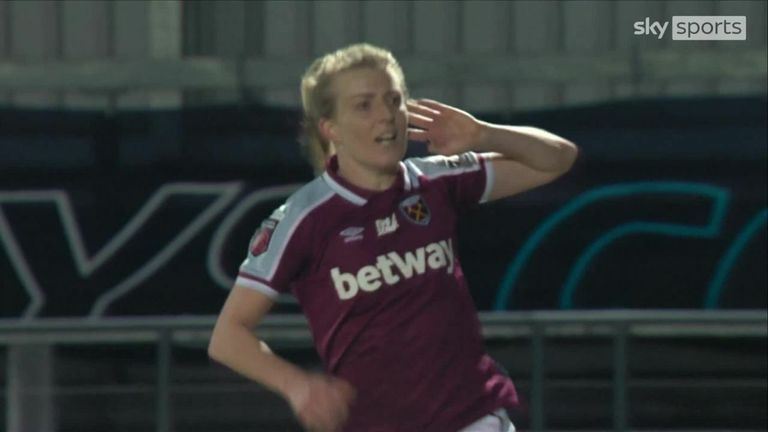 Longhurst – a lifelong Hammers fan and season ticket holder – looped the ball home in the 92nd minute to secure a draw for a lacklustre West Ham in what was their only shot on target.

It cancelled out Rosella Ayane’s penalty (54), given away by Hawa Cissoko, who was sent off just minutes later for a second bookable offence (56).

Both teams were playing their first games in almost a month, and it was Tottenham who started the better. Ayane forced a good save from Anna Leat – making her WSL debut – before firing a tame effort goalwards after a quick break.

West Ham offered very little by way of a reply with their best spell of the first half coming in the final five minutes. Lisa Evans and Dagny Brynjarsdottir both saw efforts blocked, before Grace Fisk flicked an effort just over the crossbar. Brynjarsdottir had nodded a corner down for her, but the defender send her effort curling onto the roof of the net.

A mere minute later, Ayane again went close. Jiali Tang picked her out on the right, she took a touch before curling an effort goalwards – but it just swang wide of the top corner as the half ended goalless.

The second half began with a burst of activity as Tottenham took the lead inside 10 minutes. They were awarded a penalty as Cissoko clattered into the back of Tang. The West Ham defender fiercely protested her innocence – just escaping a second booking – but the penalty correctly stood. 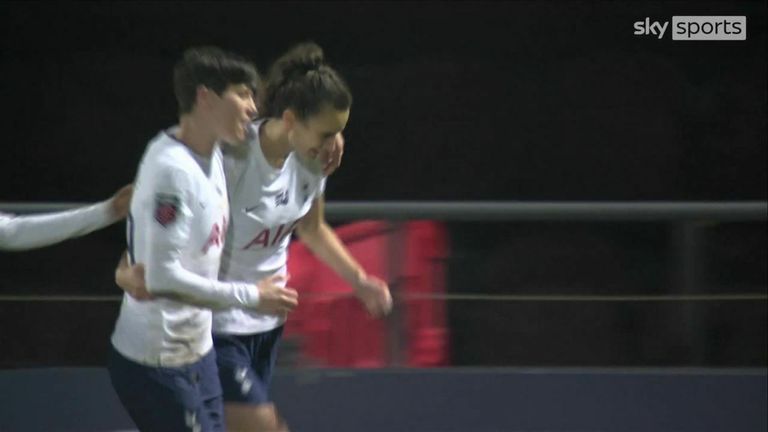 Ayane was the player to step up and hammered the ball into the bottom corner, with Tottenham deserving their lead on the balance of play.

But while Cissoko had escaped a red card for her part in the penalty, another heated reaction proved to be her downfall shortly after. She tripped Jessica Naz over in midfield and kicked the ball away in frustration afterwards. It was enough for referee Amy Fearn to produce a second yellow card to send Cissoko off – having been booked for a challenge on Ayane in the first half – and reduce West Ham to 10 players. 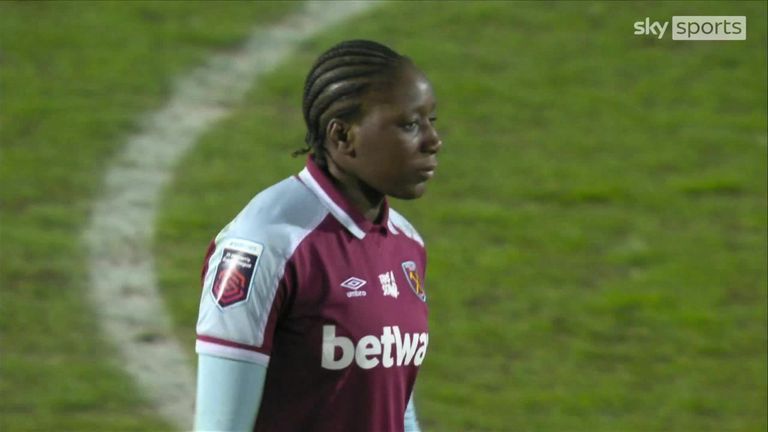 It is the second time this season that Cissoko has been shown a red card after also being sent off in a 2-0 defeat to Brighton in September.

Tottenham had the chances for a second too. After some neat play, Ashleigh Neville drove through two claret and blue shirts before striking but Lucy Parker managed to stop it just before the goal line. Tang then forced a good save from Leat, who came out to block the China international’s effort.

Spurs were on their way to second in the WSL table and seeing when Longhurst popped up with the equaliser in stoppage time. Brynjarsdottir floated a cross into the middle, with the Hammers midfielder ahead of Molly Bartrip. She then looped a header over Becky Spence – who had not needed to make a save all game – and wheeled away in a rapturous celebration.

The result sees Tottenham remain in fourth, although level on 21 points with Manchester United Women and Chelsea Women in the Champions League places. The result does keep West Ham in eighth, and are now four games unbeaten in the WSL.

Longhurst: I was probably as surprised as anyone! 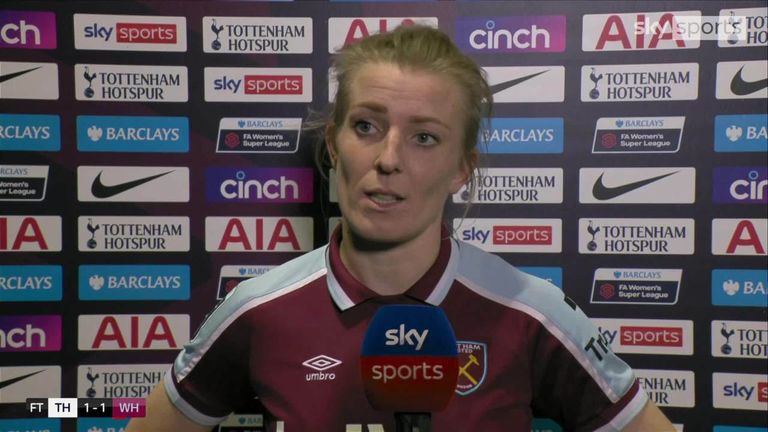 “To be honest, I was probably as surprised as anyone on the pitch. In terms of performance, we dug deep and did what we have to do. It didn’t help going down to 10. We knew we had to keep defending and if we could just get one chance, we can take it.

“Everyone would rather say they’d have three points, but you hear the injury time and you manage to get an equaliser. It was a great feeling which you can tell from me running half the length of the pitch.

“I think that’s my first goal since my debut for West Ham in the WSL, which was a few years ago. I don’t think I’ll sleep tonight thinking about it. It just connected well and as a West Ham fan, you want to score against the teams you don’t like and that’s what I managed to do.

“As I headed it, I couldn’t tell if it was going to go over. I couldn’t really tell where the ball was going so once it went in… I can’t really remember it too much, it was just about getting something on it.

“I actually thought I made the foul [before Cissoko’s red card] so I wasn’t sure what the ref was going to do. I didn’t see what happened after. In those moments, you’ve got to keep a calm head. Hawa knows that, she’s been a brilliant player for us since she’s been here and she is very passionate.

“She’s a great person to have around the team and we’ll get behind her and make sure she’s alright. But that’s something that we need to learn from as a group of players, to not to that again.”

‘One moment, one chance and Longhurst took it’

“Spurs had so many chances and entries into the final third and they’re probably thinking they’ve got themselves to blame and they have. You’ve got to take your chances and for so long, they’ve been good at keeping clean sheets.

“But this West Ham side was resilient and came back. One moment, one chance, Longhurst took it and they got themselves a point.

“The performance wasn’t there today but if they play badly and come away with a draw, they’ll take that.

“For Spurs, Skinner has come in and made them so much better – their style, their defensive display, their attitude, their application.

“But winning games by a one-goal margin isn’t enough and you’re putting so much pressure on the backline. That will be their Achilles heel and they won’t make the top three. They could struggle for top four if they don’t get a striker in.”

“Spurs continued to be the dominant side, but they weren’t clinical and didn’t test the goalkeeper enough. As the game went on, you sort of knew West Ham might just get that one opportunity and they did.

“It is a good point for West Ham. Spurs did play very well and were the better team. They’re difficult to play at home and it was a derby. To not be beaten by Spurs in the league is a good result for the club.” 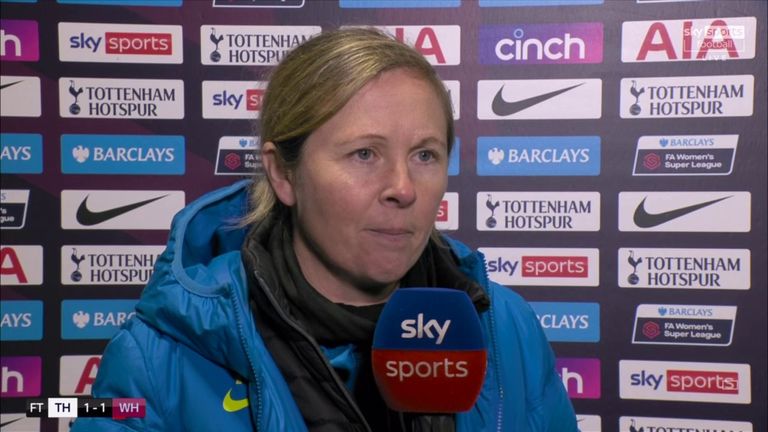 “You’ve seen a team with a greater amount of possession. We’ve dominated the game and we’ve dictated everything that’s gone on throughout it, but we’ve not finished off chances when we’ve had the opportunity to do that.

“Towards the end of the game, you give someone the chance to get back into it… We’ve got to make sure we put games beyond teams in that situation, like we had the opportunities to do.

“Everyone is very accepting of that, we just spoke about it and the players have agreed with that. Ultimately, that is the next stage for us – we’ve got to be better with that.

“It feels like two points dropped based on the way we’ve completely dominated the game from start to finish, apart from five minutes just before half-time.

“In terms of the way we’ve gone about the game, we’ve pressed incredibly well, we’ve made life really difficult for West Ham to be able to get out of their own half. We’ve created a number of chances throughout the game so there’s loads of positives from it but we’ve dropped two points and that’s something we have to make sure we do better with.

“For me, it’s looking at the things we want to get better at. We did get a lot of positives out of it but we have to move on quickly. We’ve got a three-game week in front of us so it’s about making sure we do better next time.

“We know what we’ve got to do next time and every time I’ve asked the players that, to think about what they can improve on, they’ve done that so I’m looking forward to seeing what happened next.”

Harder: I wanted to win, but understand where we are 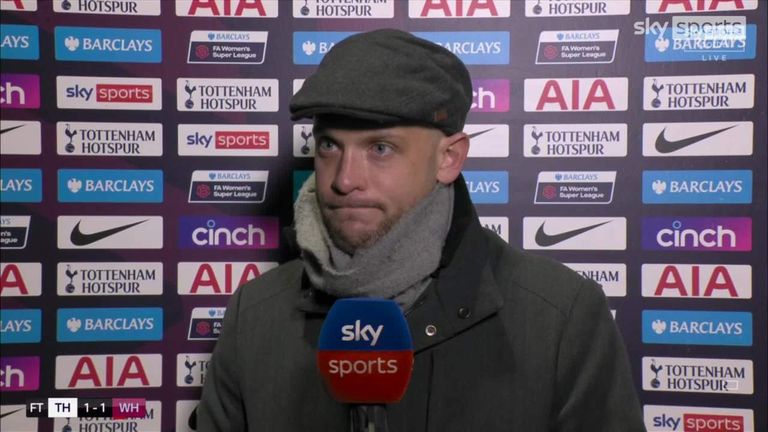 “It was about what you can expect after a month away. We knew we weren’t going to be at our best, so for us, it was about resilience and it’s made even more challenging when we go down to 10 players.

“We’ll take a point, it’s four out of six against Spurs, and we’ll move on. But certainly not the most beautiful game of football.

“Kate got her team talk in so she was pumped for it and of course, if anyone was going to do it, it was going to be her. Also coming from a situation we work on a lot in training in regards to getting those numbers in the box and getting that ball in.

“It’s a great way to finish of course, but I feel a bit for Spurs. They did play well and they looked like they played a game more than us, but we’ll take the point.

“The penalty itself I haven’t seen back, that obviously wasn’t a yellow [for Cissoko], but the second yellow she picked up for me, it is a second yellow. It’s unfortunate and these things happen, but it put us on the back foot so I was disappointed with that. Before that, I thought she played really well.

“Myself personally, no [he doesn’t go away happy]. I wanted three points, I wanted to win the game, but I also understand where we are at the moment. If I’m happy with a draw away at Spurs then I’m not doing my job right.”

Parker came on as Cissoko’s replacement in the 67th minute, but produced an inspired performance that helped West Ham take a point.

West Ham’s Kate Longhurst said: “She was fantastic when she came on. She had a really good performance. She’s been training really well and I thought she was unlucky not to be playing anyway. She’s just one of those people that gets her head down and works hard.

“We were all delighted because she’s one of those people that keeps you going. She gave us a bit of energy as well, at that point [when she came on], we were getting tired legs, but she gave us real energy in defence.

“The one off the line, you need people in big moments and she definitely had that for us and allowed us to get something from the game.”

Rachel Corsie – who trained with Parker in Kansas – told Sky Sports: “She was very solid when she came on. At one point, she made an important block that probably settled her into the game. I don’t think she’s had as much playing time as she might have hoped, but she is a very confident player and very capable.”

Player of the match – Ashleigh Neville

“There’s been a few, but I have to go for Ashleigh Neville. She’s been brilliant in terms defensively and going forward, she’s shown real attacking promise, wanting to get into the box and make things happen.”

Tottenham are in WSL Cup action in midweek, hosting Liverpool Women in their quarter-final clash. They will then travel to Manchester United Women in the WSL next Sunday; kick-off 12pm.

West Ham also face a big quarter-final in the WSL Cup as they host Chelsea on Wednesday. They will then welcome Everton in the WSL next Sunday; kick-off 3pm.

You can watch free match highlights of both games from midnight on Monday.