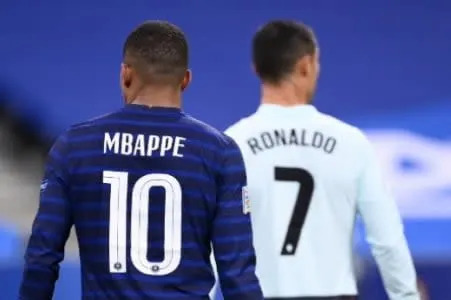 Real Madrid and PSG meet this Tuesday, for the Champions League, but on opposite sides. PSG striker Kylian Mbappé, who admits he had a desire to wear the Merengue jersey and was approached by Spain in the final European summer transfer window, is still holding on to his PSG jersey and seeking an unprecedented Champions League title.

CONTROLS IN THE TRANSFER WINDOW
It is no new news to anyone that PSG have attempted, on several occasions, to renew the seven jersey contract. However, the young man rejected all proposals and looked for a way out to a club where he could be the protagonist, because in France, the athlete, in theory, lives in the shadow of Neymar and Messi.

In August 2021, relations between the two clubs deteriorated – and much – because of Real Madrid’s advancement by the world champions. After much speculation, Leonardo, director of Paris Saint-Germain, attacked and condemned the Spanish club’s attitude towards staying in touch with the player.

Marquinhos trusts Messi to defeat Real Madrid in the Champions League: ‘I want it to be decisive’

Atalanta vs Juventus: probable teams and where to watch the Serie A game

Best Sporting of the century seeks miracle against Manchester City

However, there is one fact: Mbappe wants to leave. The athlete himself admitted, after the window was closed, he made a request to the manager. Real Madrid did everything to sign him, including sending a 160 million euro offer, which Nasser Al-Khelaifi’s club rejected.

CONFRONTATION BEFORE THE ANNOUNCEMENT
​After the end of the European summer market, Real Madrid chose to work only behind the scenes. Without fanfare, but with the belief that Mbappe will not renew his contract with PSG, which has not happened to this day, the Merengues are waiting in June to announce the arrival of the star.

In France, there is an understanding that there is nothing more to do than wait the next few months for the ace to leave his home country for the first time to join, free of charge, a squad that already has Vinícius Júnior, Hazard, Rodrygo and Karim Benzema.

IN Idol’s Place
Another thing that may not be new to almost everyone is the idol worship that Mbappe has of Cristiano Ronaldo. The French national team athlete admitted to flattering the Portuguese in an interview with “Marca“, in 2017, when he already stood out in a Monaco shirt.

During his visit to the club, the young man took a photo in his white shirt at the time, in addition to pointing out that his room was full of pictures of Cristiano Ronaldo, especially the one wearing the Real Madrid shirt.

Next season, Mbappé will have the chance to wear the uniform with which his great example in football was successful. In addition to success, the guy scored 450 goals in 438 games and won 16 titles. If the change of air is confirmed, the Frenchman will have to wear shirt number seven and will succeed, with great expectations, the last great athlete to wear this number in the merengue team.

In this Cold War atmosphere behind the scenes, Real Madrid travels to face Paris Saint-Germain for the first game of the decision. In France, fans of Mauricio Pochettino’s team protest against Leonardo and club officials. The atmosphere of tension increases and the match promises great emotions.