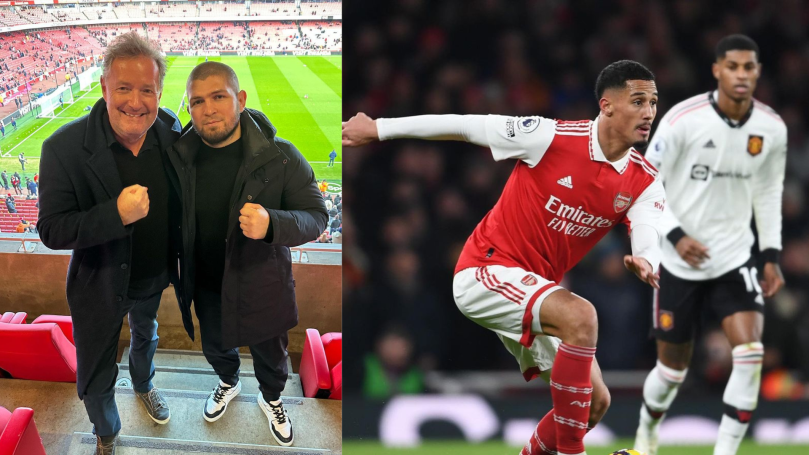 Arsenal beats Man UTD: UFC news: Khabib Nurmagomedov appears to be spending some quality time in the UK where the ex-UFC champion…

Arsenal beats Man UTD: UFC news: Khabib Nurmagomedov appears to be spending some quality time in the UK where the ex-UFC champion is witnessing the ongoing EPL season live from the stadiums. ‘The Eagle’ watched Arsenal beat Manchester United in a nail-biting contest at the Emirates Stadium, while Piers Morgan accompanied him. Follow UFC News Updates with InsideSport.IN.

Khabib Nurmagomedov took to social media and shared his experience at the recent Arsenal vs Man UTD game. Here’s a look at Nurmagomedov’s Instagram post.

In the caption, the UFC great wrote, “Amazing day in London.”

Manchester United kicked off their dominance with Marcus Rashford scoring the opening goal in the 17th minute. However, Arsenal leveled the scoreboard in the 24th minute. The scoreboard remained 1-1 till the half team, but Arsenal picked up their form in the second half of the game. Although Manchester United fought commendably, Arsenal sealed the day with a lead of 3-2.

Khabib Nurmagomedov also posted videos of football fans celebrating Arsenal’s win in the streets of London. That said, Khabib’s love for the sport of football has been evident yet again.

The undefeated UFC veteran is a huge follower of football and was also present in Qatar to watch the 2022 FIFA World Cup live. Khabib has tagged football as the best sport in the world several times.

Now that he is out of his MMA duties, the firmer champion can invest more time in enjoying football. Khabib Nurmagomedov is close to multiple footballers, including Cristiano Ronaldo and now Piers Morgan also appears to become one of the ex-UFC champion’s allies.

Is Khabib Nurmagomedov done with MMA?

Khabib Nurmagomedov retired as a fighter after earning his 29th pro-win against Justin Gaethje but continued to coach young prodigies and his teammates. He guided Islam Makhachev to becoming the UFC lightweight champion. Since Makhachev has now become an-listed titlist, Khabib Nurmagomedov claimed to cut ties with MMA in all forms.

He wants to spend more time with his family and seems uninterested in traveling all over the world any longer. Khabib, walking away from MMA, however, will not erase his ever-lasting legacy in the sporting community.