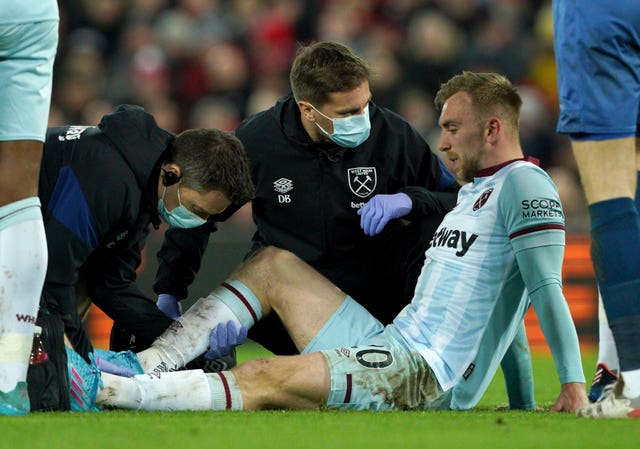 Andriy Yarmolenko could return to the West Ham squad to face Aston Villa on Sunday for the first time since the Russian invasion of his homeland Ukraine.

The club initially granted Yarmolenko compassionate leave after the invasion began on February 24, but the 32-year-old returned to training at the start of this month.

Hammers boss David Moyes revealed he had almost been part of the club’s plans for the Europa League trip to Sevilla earlier this week.

“We had included him in the squad, he felt he was ready to get back involved again, but it was an illness which meant that we weren’t able to take him.

“I’m hoping that he can be back around the team on the weekend, but I couldn’t be sure quite exactly at the moment.”

Moyes said he anticipated a positive reception for Yarmolenko at the London Stadium if he was involved.

“Undoubtedly and rightly so. You’ve seen the response from Premier League clubs who have Ukrainian players,” the Scot said.

“We’re the same for Yarmolenko, we’re always thinking about him and his family because all the Ukrainian (players) have got family members in the country, whether that be brothers, sisters, mums, dads, cousins or nieces, whatever it may be, I think they have all got members of their family in the country.”

Yarmolenko’s last appearance for West Ham in any competition was the FA Cup win over Kidderminster on February 5, and he has not played for them in the Premier League since January 16.

The club will be without goalscoring midfielder Jarrod Bowen, who suffered a heel injury in last weekend’s defeat by Liverpool and missed the Europa League loss to Sevilla on Thursday.

Moyes said: “We did miss him against Sevilla, but I’ve got to say we didn’t have Declan Rice against Liverpool. Did we miss him? Yes, but we coped without him and I thought we coped without Jarrod Bowen in last night’s game in Seville.

“But we could do with Jarrod’s goals which were important to us in the last month or so, so I’m hoping that we get him back.

“It’s a really difficult injury to diagnose completely and that’s probably the hold-up with it. We do hope we can get him closer to fitness but he won’t be available for this weekend’s game.”

Like West Ham, Villa were in action on Thursday night, in a Premier League win at Leeds.

“From that point of view, it does equal out a little bit,” Moyes said.

“(Playing Thursday and Sunday) is something that you need to get used to and make use of your squad which we were able to do in the early stages.

“What we have got now is that we are having to get closer to a regular team because the games are must-win games. The group stages give you the opportunity to chop and change a little bit.

“Hopefully we have shown when the games have come thick and fast and a bit more regular, that might have suited us.”