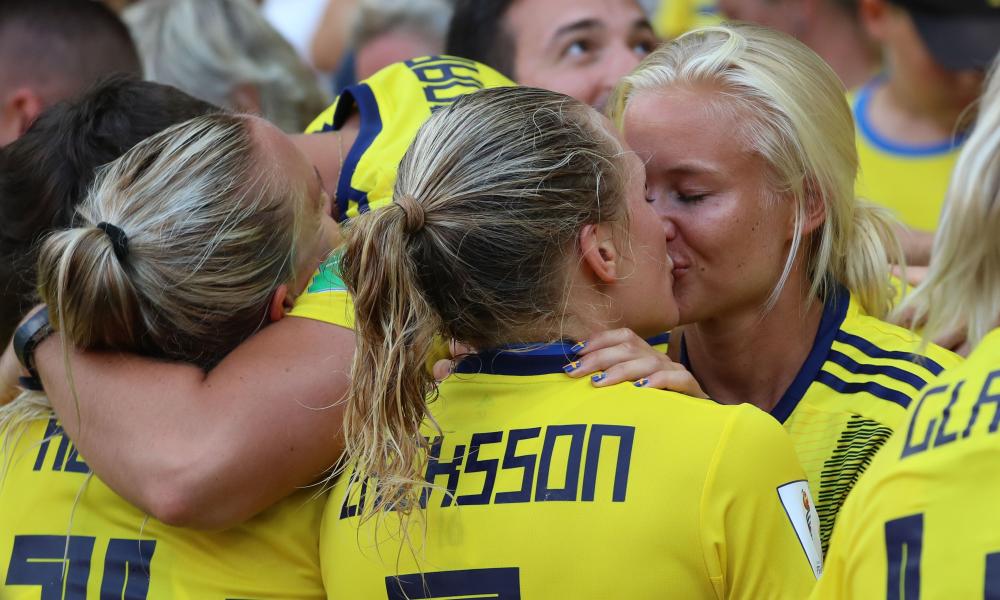 From on-pitch proposals to managerial feuds, passions boil over in our Valentine’s-themed quiz

1.
The photo above was taken at the 2019 World Cup, capturing a post-match kiss between Sweden’s Magda Eriksson and her partner, Denmark forward Pernille Harder. Which English club do both women now play for?

2.
José Mourinho spoiled his rival Arsène Wenger’s Valentine’s Day in 2014, by describing him as what?

3.
Which Scotland manager’s reign began on a snowy Valentines’ night in 1973 – with a 5-0 loss to England at Hampden Park?

4.
‘We just get on great together. I’m just madly in love with her. You couldn’t have a row with my missus if you tried. She’s so laid-back.’ Which former Premier League manager had this to say about his wife?

5.
Which manager gave their team pink roses and a poem to read on the way to the Women’s FA Cup final?

6.
Last year, Lorenzo Insigne sent this Valentine’s message to his wife, Jenny Darone, after scoring against Juventus. Where are the couple off to this summer?

7.
Which player has turned a romantic gesture for his girlfriend into a trademarked celebration, reportedly earning him £3m a year?

8.
Last year, River Plate Asunción manager Celso Rafael Ayala proposed to his girlfriend before a game – with the help of his players. But what went wrong?

9.
‘Valentine’s Day massacre: Fulham sack __ and replace him with __. The whole world is gone mad.’ A tweet from our own Barry Glendenning in 2014. But who are the missing names?

10.
‘Everyone thinks he has the prettiest wife at home’ – one of Arsène Wenger’s weirder analogies, but which rival manager was upset by it?

11.
Which player, who has recently returned to British shores, scored a big birthday goal on 14 February 2016?

12.
‘Don’t send me flowers when I’m dead. If you like me, send them while I’m alive.’ Which manager once said this?

13.
Which current Premier League manager scored against the club he now coaches on 14 February, 2005?

14.
When Ian Holloway became Grimsby Town manager, he asked for what to be made available to his wife, Kim?

15.
Finally, who said this? ‘I hope that people associate me with football, and what I’ve done there. But some may be thinking of women when they hear my name.’

Solutions
1:C – ‘When we saw that photo and the comments around it, then it was really something; like: we’re role models,’ said Harder, who joined Eriksson at Chelsea in 2020., 2:B – It was the latest jab in the two managers’ long war of words, with Mourinho previously calling Wenger a ‘voyeur’, and the Arsenal manager saying his rival was ‘disconnected from reality’. Antonio Conte called Mourinho a ‘little man’ and ‘a fake’ after he made fun of his hair., 3:B – Ormond’s tenure got off to a terrible start but he led Scotland to the 1974 World Cup, while England failed to qualify., 4:D – Redknapp’s affectionate anecdotes about his wife, Sandra, were a highlight of I’m A Celebrity … Get Me Out of Here in 2018. The former Spurs manager also once said his wife would have converted a chance that striker Darren Bent missed., 5:C – ‘I wanted more than anything else to put them in a calm space,’ said Hayes about the gesture. The Chelsea manager grew the roses in her garden, and it paid off as they beat Notts County 1-0 in the 2015 final., 6:C – Insigne has agreed to join MLS side Toronto FC, so the Neopolitan couple and their two kids are moving to Canada., 7:A – The Welsh winger’s heart-shaped hand gesture to Emma Rhys-Jones was trademarked in 2013. Someone should tell Di María, who makes the same gesture for his wife. Suárez’s usual goal celebration is for his wife and daughters, while Özil makes an ‘M’ with his hands for his niece, Mira., 8:B – Ayala proposed to Lili Benitez on the pitch before the game in Paraguay. Players held up placards that read ‘Lili, marry me’, and went on to lose 5-1 to Guarani. , 9:C – Meulensteen was dismissed on Valentine’s Day, with the eccentric Magath stepping in. The first German to manage in the Premier League, he certainly wasn’t the best., 10:A – Wenger’s comment was in response to Ferguson’s claim that United were the ‘better team’ in the 2002 title race. It’s rumoured that the Arsenal manager called Ferguson to clarify he wasn’t actually talking about his wife, Cathy., 11:D – Eriksen, who was born on Valentine’s Day in 1992, scored the winner for Spurs at Manchester City. Tottenham had the look of champions – but Leicester won the title., 12:A – Another Cloughie gem: ‘My wife said to me in bed: God, your feet are cold. I said – you can call me Brian’, 13:C – The Frenchman got Arsenal’s fourth goal in a 5-1 win over Crystal Palace at a loved-up Highbury., 14:B – Holloway revealed that his wife’s favourite hobby ‘entered my conversation with Grimsby and happily they were able to help.’ He first met the club board in Steels, a famous Cleethorpes chip shop., 15:C – Of course it was. When asked by Expressen about the secret of his romantic magnetism, Eriksson replied: ‘Money and status. You hope that there is something more too, but I don’t know.’