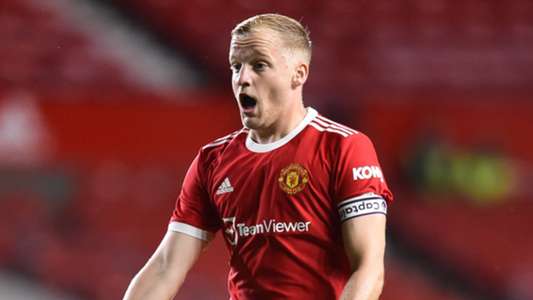 Manchester United could “cut their losses” on Donny van de Beek, according to Dimitar Berbatov, who says the £35 million ($48m) midfielder “looks lost”.

United handed Van de Beek a five-year deal after rising him away from Ajax in September 2020, having seen him emerge as one of the most exciting young playmakers in Europe at Johan Cruyff ArenA.

Unfortunately, the 24-year-old has since failed to nail down a regular spot in Ole Gunnar Solskjaer’s starting XI, leading to major question marks over his long-term future at Old Trafford.

Van de Beek was handed his first start of the 2021-22 campaign in the Red Devils’ 2-1 defeat at Young Boys in the Champions League on Tuesday, but came off at half-time as Solskjaer was forced to shuffle his pack following a red card for Aaron Wan-Bissaka.

Berbatov thinks the Dutchman could be made available for transfer next year unless his situation changes quickly, as he has told Betfair: “Van de Beek looks lost. He is running out of time to save his United career. He started against Young Boys but was substituted at half-time. This has been the story of his time at the club.

“If he plays, he’s brought off. If he comes on, he gets 10 minutes. He never gets the chance to settle and show what he can do.

“It’s just not working out for Van de Beek. It’s a pity because United paid big money for him. But this is what happens when you spend money just to satisfy your fans.

“I still hope he gets a proper chance but it is going to be very difficult for him and the club may decide to cut their losses, if they can.”

The former United striker is more optimistic about Solskjaer’s chances of staying at Old Trafford, though, despite the fact that calls for the Norwegian manager to be replaced have increased in the wake of another disappointing Champions League display.

Berbatov insists that it is still far too early to judge Solskjaer as he attempts to bring the club’s five-year trophy drought to an end in 2021-22.

“Seven defeats in 11 Champions League matches under Ole Solskjaer is not good enough for United. I get that but sometimes there is more to football than the statistics show,” he said of his ex-teammate.

“Is Solskjaer’s job at risk after the defeat in Switzerland? Come on, you can’t be serious. United have played four games in the Premier League and won three of them. One defeat in the Champions League does not put Ole’s job in jeopardy. I don’t see any point in discussing Solskjaer’s future so early in the season.

“United have a strong squad, have made excellent signings who are bedding in, and we should judge them at the end of the group stage, not after one match.”