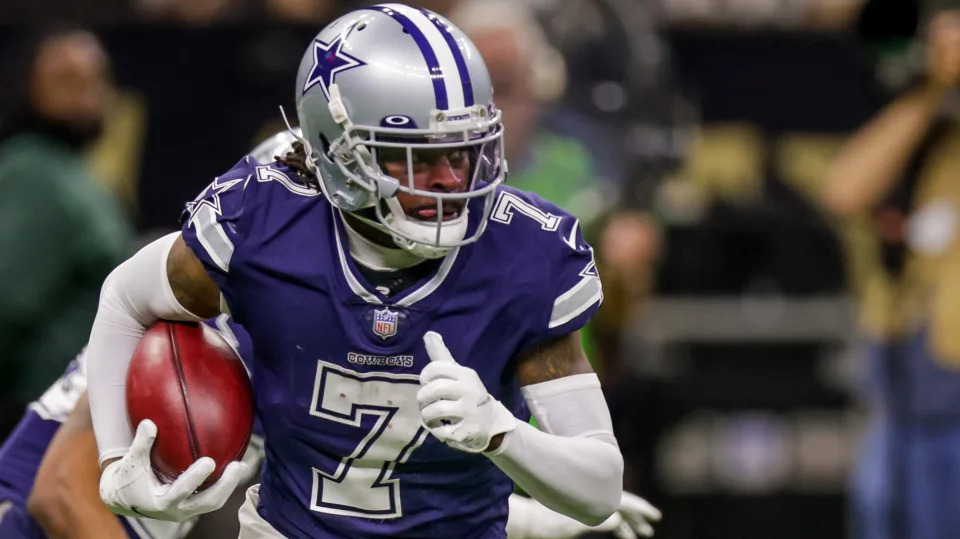 This hasn’t been a season like 2019, when the New England Patriots came roaring out of the gate in fantasy football and never looked back. No, in 2021 there have been several defenses who have laid claim to the title of No. 1 defense at one time or another.

After the first month of the season, it was linebacker Tremaine Edmunds, safety Jordan Poyer and the Buffalo Bills. By Week 9, edge-rusher Chandler Jones, safety Budda Baker and the Arizona Cardinals had passed them. Fast-forward a few weeks, and edge-rusher Matthew Judon, cornerback J.C. Jackson and those pesky Patriots had passed them both.

And now, with linebacker Micah Parsons trying his level best to win Defensive Rookie of the Year and Defensive Player of the Year and cornerback Trevon Diggs pacing the league in interceptions, the Dallas Cowboys have used back-to-back big weeks to surge into the lead.

Whether the Cowboys manage to hold that lead or not remains to be seen. But Dallas is this year’s poster defense for waiting to draft one. For being patient and targeting matchup plays early until we get a feel for how the new season’s defenses will shake out.

Of course, Dallas will be overdrafted in 2022 by fantasy managers chasing this year’s numbers, but that’s an issue for another day. Right now, the Cowboys are No. 1.

And it’s only fitting they lead off this week’s edition of Getting Defensive.
THE NO-DOUBTERS
Dallas Cowboys (vs. Washington Football Team)

Micah Parsons is a mortal lock for Defensive Rookie of the Year, and if he closes strong winning Defensive Player of the Year isn’t out of the question. The Cowboys lead the NFL in fantasy points among defenses and sit tied with the Indianapolis Colts for the most takeaways. We have also seen this movie before. In Week 14, the Cowboys defeaTed Washington 27-20 on the road. In that game, the Cowboys battered Taylor Heinicke for five sacks, forced four takeaways and scored a touchdown. Other than that. They were just OK.
Tampa Bay Buccaneers (at Carolina Panthers)

To say that Week 15 was a rough one for the Buccaneers is an understatement—Tampa lost their top two wide receivers, their No. 1 running back and the game to the New Orleans Saints—in shutout fashion. But while the offense took a beating, the defense did just fine, allowing just 212 yards of offense and three field goals while sacking Taysom Hill twice. Tampa’s opponent this week is falling apart on offense—after 15 weeks the Panthers have surrendered the fourth-most fantasy points to team defenses. This one could get ugly, folks.
San Francisco 49ers (at Tennessee Titans)

The 49ers are one of the NFL’s hottest teams, and Nick Bosa and the San Francisco defense are a big reason why. Since Week 10, the Niners are sixth in both fantasy points per game and total points at the position, and San Fran sits sixth in the league in total defense, ninth against the pass and ninth in sacks. While the 49ers are surging, the Titans are barreling in the opposite direction—Tennessee has been shredded by injuries on offense and turned it over four times in last week’s loss to Pittsburgh. Over the past month, only two teams have surrendered more points to fantasy defenses.
Miami Dolphins (at New Orleans Saints)

There isn’t a hotter team in all of the NFL than the Dolphins, and Miami’s defense is one of the better in the league that isn’t talked about as one of the better in the league—the Dolphins are eighth in the league in run defense and a respectable seventh among team defenses in fantasy points. That ability to stuff the run could mean problems for a Saints team that isn’t exactly lighting the world on fire through the air, which has been Miami’s weakness this season, The Dolphins may not crack the top-five this week, but they’re a good bet to hold a spot inside the top-10.
Buffalo Bills (at New England Patriots)

From a fantasy perspective, the Bills have cooled a bit after a red-hot start to the season, but there’s still a lot to like about this defense. Buffalo ranks fourth in fantasy points, first in total defense, first against the pass, second in scoring defense and third in takeaways. The Patriots aren’t the greatest of fantasy matchups, but for the season they also aren’t a terrible one, checking in 18th in fantasy points allowed to the position. Last week the Colts notched two takeaways, a sack and a special teams score against New England—so the team can be had.
New England Patriots (vs. Buffalo Bills)

You had to know that the Patriots were going to make an appearance here—even against an offense as potent as the Bills. If there’s a defense with a real chance of catching Dallas it’s likely the Pats, who rank among the league leaders in fantasy points, total defense, scoring defense, pass defense and takeaways. Unfortunately, New England won’t have the benefit of playing the Bills in the inclement weather that shut down both offenses in Week 13, but the Pats do have the advantages of familiarity and a coach in Bill Belichick who I hear is pretty good at the whole defense thing.
Kansas City Chiefs (vs. Pittsburgh Steelers)

A little bit of the shine came out Kansas City’s defense in last week’s overtime win over the Chargers, but Justin Herbert has a tendency to make even good defenses look a tad dingy. But make no mistake—over the team’s seven-game win streak, the Chiefs have been playing as well as any team in the league defensively. Since Week 10, there isn’t a team in the AFC that has scored more fantasy points than the Chiefs—and that’s with last week’s lackluster fantasy line taken into account. Against a sputtering Pittsburgh offense on Sunday, the surging Chiefs should roll.

The App is Back! Don’t forget to download the NBC Sports EDGE app to receive real-time player news, mobile alerts and track your favorite players. Plus, now you can check out articles and player cards. Get it here!
STREAMERS OF THE WORLD, UNITE!
Denver Broncos (at Las Vegas Raiders)

That the Broncos are 7-7 and still at least on the fringes of the postseason chase in the AFC can be credited almost solely to the league’s fourth-best defense, third-best scoring defense and fantasy football’s No. 8 defense—a defense that sports one of better defensive backfields in the NFL. This week the Broncos travel to face a Las Vegas Raiders team that has had issues offensively of late—last week in Cleveland, the Raiders managed just a single touchdown, and Vegas now sits inside the top-10 in fantasy points given up to team defenses.
Los Angeles Chargers (at Houston Texans)

The Chargers haven’t exactly been a fantasy-relevant defense this season—with three games left to play, the team sits in the bottom-10 in fantasy points for the year. Safety Derwin James is hurt, and edge-rusher Joey Bosa just landed on the COVID-19 list. But as so many of the calls in this section of this column are, this really isn’t about the Chargers. It’s about the team that is playing the Houston Texans. Davis Mills has shown a modicum of improvement recently, but Houston still sits fifth in fantasy allowed to team defenses for the season.
Philadelphia Eagles (vs. New York Giants)

As of the writing of this article, the Eagles still haven’t played their Week 15 game, compliments of the COVID-19 outbreak that ravaged the Washington locker room and forced their game to be postponed until Tuesday. The Eagles have also been just a middling defense in terms of fantasy points this year. But this doesn’t have that much to do with the Eagles anyway—this is all about the Giants and an offense that ranks 27th in yards per game, dead last in the NFC in points per game and ninth in fantasy points allowed to defenses. Fly Eagles fly.
Green Bay Packers (vs. Cleveland Browns)

The Packers were a fantasy letdown in Week 15, getting gashed by a scuffling Baltimore Ravens offense that was without quarterback Lamar Jackson. But sometimes fantasy football requires a short memory. This is one of those times, On Christmas Day, the Packers face a Cleveland offense that has scored over 20 points in a game all of twice since the first of October—and that’s with a healthy roster. With the team’s top two quarterbacks, No. 1 wide receiver and starting tight end all sitting out Week 15 on the COVID-19 list, there’s no telling who the Browns may have to roll out on a short week Saturday.
New York Jets (vs. Jacksonville Jaguars)

OK, let’s get this out of the way. The Jets are not good. At anything. New York just gave up a 100-yard rushing game to Duke Johnson, who I’m pretty sure was working at a Whole Foods three weeks ago. But as bad as the Jets are at playing defense, the Jaguars are worse at, well, just about everything. The Jaguars are 31st in total offense, dead last in scoring offense and have allowed the most fantasy points to opposing defenses. Since Week 9, Trevor Lawrence has one more touchdown pass than Kurt Warner. Kurt Warner is only playing at a theater near you.
CAVEAT EMPTOR, FOLKS
Arizona Cardinals (vs. Indianapolis Colts)

For much of the 2021 season, the Cardinals have ranked among the league’s best fantasy defenses—at present they sit sixth in points for the year. But that season-long ranking looks more like a mirage by the week of late. The Redbirds are experiencing another December swoon, and the defense has posted back-to-back clunkers—including one is a highly favorable matchup last week in Detroit. This week the Cardinals host an Indianapolis Colts team that doesn’t turn the ball over and ranks 29th in fantasy points given up to defenses in 2021. Fade them. Period.