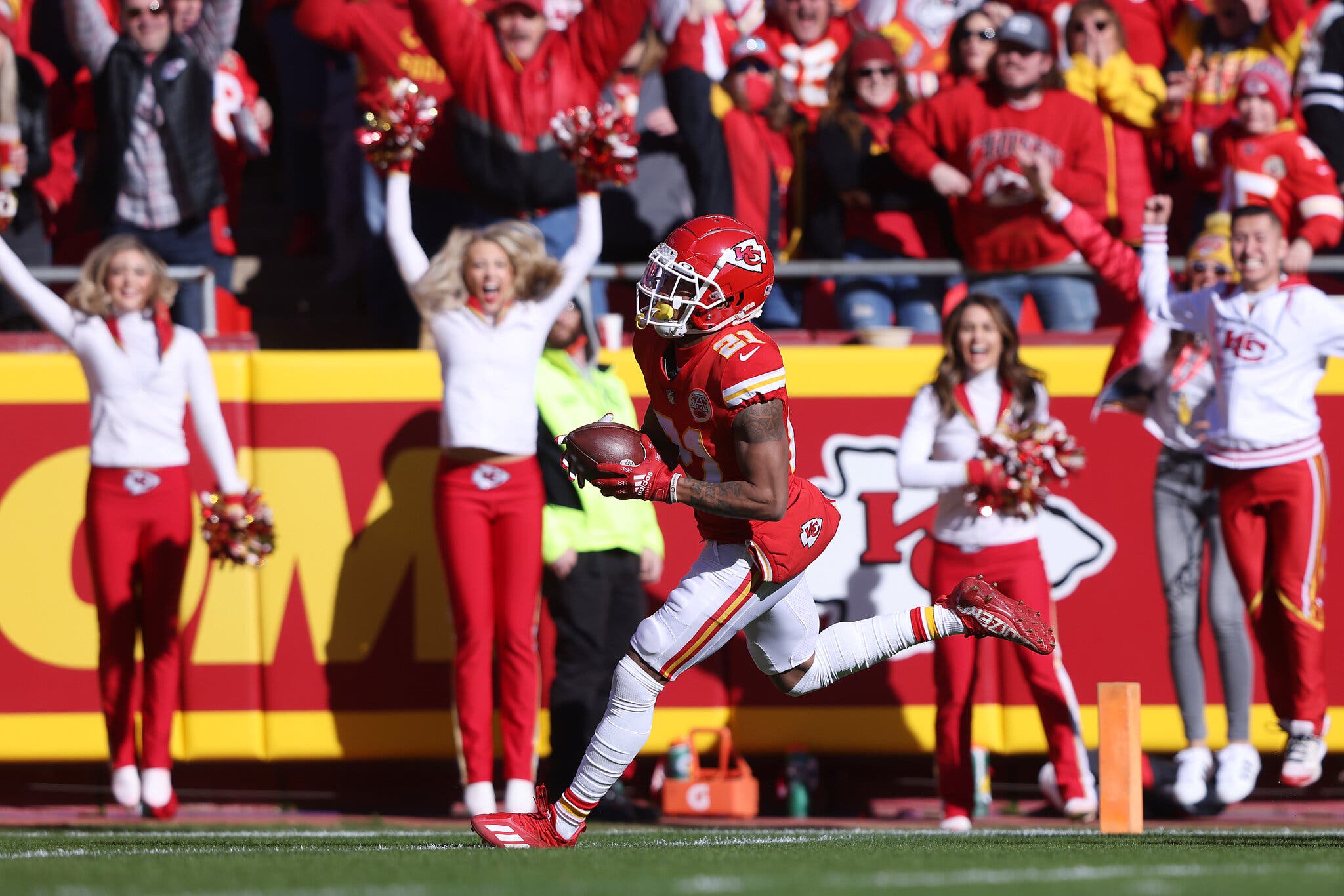 “Kansas City’s defense could give Patrick Mahomes the breathing room to grab home-field advantage, and Micah Parsons made good on the Cowboys’ promise to beat Washington”

A strange thing happened as quarterback Patrick Mahomes continued to struggle with the Rubik’s cube known as the two-deep shell. As he looked so unfathomably human against N.F.L. defenses that played their two safeties deep to prevent long passes, the Kansas City Chiefs methodically built a juggernaut in a less celebrated area: their defense.

The team’s latest beatdown — a 48-9 drubbing of the Las Vegas Raiders (6-7) in Kansas City, Mo. — added a sixth game to the Chiefs’ win streak, gave them the same 9-4 record as the New England Patriots and the Tennessee Titans, and gave us our top takeaway of Week 14:
Defense has Kansas City ready to challenge New England for the A.F.C.’s top spot.

This has been a cluttered mess of a conference. Titans running back Derrick Henry had been on a pace to set the career rushing record when he broke his foot in November. That was right when Josh Allen of the Buffalo Bills and Lamar Jackson of the Baltimore Ravens, who had looked like contenders for the Most Valuable Player Award, began to stammer against inferior opponents.

One trend over the past two months has been the Kansas City defense hammering opponents, which, if it continues, could catapult the team to a third consecutive Super Bowl appearance.

Mahomes was sharp, completing 20 of 24 passes for 258 yards with two touchdowns and no interceptions, but he is not the most dangerous man in Kansas City right now. That is Steve Spagnuolo, the team’s defensive coordinator, who is stupefying opposing quarterbacks with his endless scroll of blitzes.

On Sunday, Kansas City forced five turnovers and hit Raiders quarterback Derek Carr 11 times. With Kansas City up, 21-0, at the start of the second quarter, safety Tyrann Mathieu picked off a Carr pass that tight end Foster Moreau had dropped. In his ninth season, Mathieu remains brilliant playing the back end of the secondary, an assuring presence who gives Spagnuolo the freedom to send extra bodies at the quarterback.

Moved back to his natural position on the inside of the defensive line, tackle Chris Jones continues to wreck games.

In the last three games, Kansas City has allowed a total of 16 first-half points, confounding the Cowboys’ Dak Prescott (57.9 passer rating, five sacks), the Packers backup Jordan Love (15 incompletions, 69.5 passer rating) and Carr in the process. It’s a far cry from the defense that surrendered 30 or more points in four of its first five games.

Now that the defense has given his offense breathing room, Mahomes has again looked like his normal, meteoric self, a sight no team wants to see in January.

Micah Parsons and the Cowboys’ defense made good on Mike McCarthy’s guarantee.

The guarantee was odd, to say the least. Coaches of first-place teams rarely sound so desperate in mid-December, but with the Dallas Cowboys having lost two of their last three entering Sunday’s game against an N.F.C. East rival, Mike McCarthy declared that the Cowboys (9-4) would beat the Washington Football Team (6-7).

His counterpart, Ron Rivera, didn’t like that. He called McCarthy’s proclamation a “big mistake.”

The Cowboys of the 1990s could back up guarantees like that. But in the new millennium, prognostications have usually been followed by a bunch of things going wrong for Dallas.

McCarthy could speak with such confidence because his two top receivers, CeeDee Lamb and Amari Cooper, were back on the field at the same time after Lamb missed Week 12 and Cooper sat in Weeks 11 and 12. Dallas’s ascending defense had been historically bad in 2020, but has played with tenacity this season behind linebacker Micah Parsons, who had two sacks and a forced fumble on Sunday, bringing him to 12 sacks in his rookie season.

Parsons’s first sack came on fourth-and-3 at midfield. On a delayed blitz late in the first quarter, he shoved the four-time Pro Bowl guard Brandon Scherff into the backfield. Dorance Armstrong returned the sack-fumble 37 yards for a touchdown that put Dallas up, 18-0.

On Washington’s next possession, Parsons rushed up the middle on third-and-8 at the Washington 38-yard line for a sack.

Unlike pass rushers who predominantly line up at one position, Parsons, the 12th overall pick in this year’s draft, moves all over the field. Any extra attention given to blocking him creates opportunities for other pass rushers, like Randy Gregory and DeMarcus Lawrence, as it did on Sunday, when Lawrence lassoed Taylor Heinicke to the turf with one hand.
Around the N.F.L.

Broncos 38, Lions 10: Denver would like to run the ball early and often, and some opponents can’t stop that. Melvin Gordon and Javonte Williams shredded the Detroit defense for 184 yards and three touchdowns on 39 attempts, and the Broncos remain in the A.F.C. playoff picture with a massively important game against the Bengals awaiting them next week.

Chargers 37, Giants 21: The Giants are speeding toward another rebuild, but the Chargers have to be thrilled with how Justin Herbert has rebounded from a brief midseason lull. Los Angeles has thrown the ball more than 30 times in every game this season.

Falcons 29, Panthers 21: Atlanta linebacker Mykal Walker stepped in front of a Cam Newton pass and returned it 66 yards for a touchdown, reaching a top speed of 21.05 miles per hour — the fastest speed recorded by a linebacker with the ball in his hands in the last five years. Newton was benched in the second quarter for his backup, P.J. Walker, who returned to the pine after throwing a pick on his second pass attempt.

Saints 30, Jets 9: Navigating the post-Drew Brees era hasn’t been pretty for New Orleans. After beating the defending champion Buccaneers in Week 8, the Saints lost five straight. The team’s slide ended Sunday with the return of Alvin Kamara from a knee injury. He punished the Jets with 120 yards and one touchdown on 27 rushing attempts.

Seahawks 33, Texans 13: Too little, too late in Seattle. There’s a good chance this is Russell Wilson’s final season with the Seahawks, so plays like his 55-yard moon ball to Tyler Lockett only tease what could have been in 2021.

Browns 24, Ravens 22: Baltimore lost Lamar Jackson to an ankle injury in the second quarter, the one injury the team cannot afford in a season that has been rife with them. The bye week helped Cleveland’s battered quarterback, Baker Mayfield, who threw for 190 yards and a pair of scores.

Titans 20, Jaguars 0: Things have gotten ugly in Jacksonville, where Coach Urban Meyer threatened to fire whichever of his assistant coaches leaked that he had called them “losers” last week. Meanwhile, the Titans have gone 3-2 without Derrick Henry, who could return as soon as Week 18 from surgery on his fractured foot.

Tyler Dunne is the founder of Go Long at GoLongTD.com, a newsletter publication dedicated to pro football journalism. He previously covered the NFL at Bleacher Report, the Buffalo Bills at the Buffalo News, the Green Bay Packers at the Milwaukee Journal Sentinel and graduated from Syracuse University.